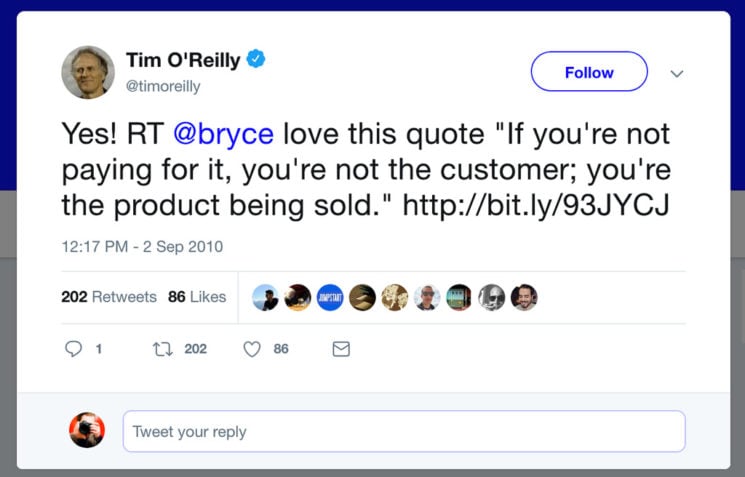 Yesterday Flickr made their first big restructuring announcement since recently being purchased by SmugMug. Beginning next year on January 8th, Flickr will limit free accounts to 1,000 photos. The previously offered free 1 terabyte of storage goes away. At the same time Flickr is returning their paid pro account to unlimited storage which had been their original offer before capping new Pro accounts at 1 terabyte back in 2013. If you were Pro before 2013 you were considered “old school” Pro and kept your unlimited storage, but new accounts were limited. Now all Pro accounts are back to being unlimited.

In 1973 the artists Richard Serra and Carlota Fay Schoolman broadcast a short video titled “Television Delivers People”. In that video a simple assertion was made: the product of television. commercial television. is the audience. Television delivers people to an advertiser. Since then, various influential individuals from Tim O’Reilly to Steve Wozniak to Apple CEO Tim Cook have all repeated the mantra: “if you’re not paying for it, you’re not the customer, you’re the product being sold.”

To put things more simply, there are two viable business models on the internet today to deliver service. There is a paid subscription model and there is a “free” model where business sell your data and make money on advertising everything from Butterfinger candy bars on Instagram to “brain force” pills via Alex Jones.

Personally, I prefer to pay for an ad-free online experience which is one of the reasons why I’ve enjoyed Flickr so much where I’ve had an opportunity to pay annually since I joined the service back in 2003. Flickr delivers a clean user interface, full high res photos, a compelling app for my iPhone, unlimited storage, kick-ass organizational tools, a social community to engage with, search tools, stats, and much more.

At $50/year (well technically $49.99 but I like to round up) I think Flickr delivers tremendous value. I have spent thousands of hours of my life on the site — thousands of ad-free hours not just for me, but for any of my friends or even strangers who happen to land on my photo page too. I am more than happy to pay this every year and will continue to do so until I die most likely. Hopefully, I will figure out a way to even continue paying after I die as my personal life goal is to publish 1,000,000 photos before I die and then let that archive of work stand in all perpetuity after I am gone.

So obviously Flickr works for me, but what about all those people who don’t/haven’t paid and just want to use the service for “free.”

I believe that one of the reasons why Flickr was sold by Oath (who had purchased Yahoo’s content businesses) to Smugmug was because Oath realized that a hybrid subscription/free service doesn’t really work. It’s the same reason why Facebook is so resistant to offering a paid ad-free option to customers.

Oath is basically an advertising company and when you are advertising at people you need to be able to advertise to your most profitable customers to make the service work. When you give your most profitable customers (i.e. the ones with money) the option to pay to opt out of ads they do and will. What you are left with is a bunch of accounts by heavy users who are either poor Americans or more likely poor overseas accounts or very light users who can put up with ads but won’t see very many because they are only on your site 2 minutes a week. Whatever the case, you are basically providing a terabyte of enterprise storage, bandwidth, support, etc., to customers who cannot economically be supported by advertising.

In order for Flickr to survive it has to be a long-term profitable business. SmugMug knows a thing or two about how to do this as their primary model for over a decade has been entirely subscription based. As someone who wants to be able to host my photos on Flickr for the 50 remaining years I likely have left on this planet (and even after my death) in order to publish 1,000,000 photos, it’s important to me that Flickr has a long-term viable business model. This means that strongly encouraging free users (who are not currently paying their way) to migrate to paid Pro is important.

I do think it is important for Flickr to offer a free account in order to give people an opportunity to try out the service to see if it is for them. 1,000 photos gives you plenty of opportunity to do just that. It gives you hundreds, even thousands, of hours to explore and enjoy the service without paying — but if you are a heavy user of the site and are using over 1,000 photos of space, at some point you ought to pay.

By the way, Flickr’s original deal when I started with them was that they would only show your most recent 100 photos if you were a free account and the Pro account cost $60 (or $59.99) per year. So you might say the current account that gives you 10x that or 1,000 is 10x more generous than the original Flickr from way back.

Besides the obvious business model reasons why this is a smart decision for Flickr and their users, there are other important reasons this makes Flickr better as well. One of the things I noticed after Flickr began offering 1 terabyte for free to users was that many users simply began using Flickr as a backup site for all of their photos. Instead of sharing their best photos with a community, they simply dumped everything on their hard drive to Flickr and left and went away. These photos were then indexed for search and populated the service littering it with low quality content (screengrabs, 1,000 bad photos in a row of fireworks, 3,000 poorly composed photos in a row of somebody’s sister’s wedding, etc.). By focusing Flickr’s vision on photo sharing and community rather than simply another online photo backup dump this makes the visual experience better for those of us who are actually there to share photos and engage with each other.

Also, if people are willing to pay for something they tend to put more effort into it. If you are paying for something and perceive it’s value you’ll care more, contribute more and be a part of something. These are the accounts that I value on Flickr the most.

Yesterday morning I had an opportunity to talk to Don MacAskill (SmugMug/Flickr CEO) about this most recent decision that Flickr is making on the phone. Don is someone who cares deeply about Flickr and its community. How many CEOs do you know that spend an entire day interacting with users in an online forum about a big change like this?

I truly believe that yesterday’s decision not only paves the way to make Flickr viable for many years ahead, but that it paves the way for Don and his team to continue to spend money growing and building out the site for the community that is there and loves the service so much.

There are still so many great things that can be done with Flickr going forward. Groups need work. Search needs work. Community needs work. The app needs work. All of these things do cost money though and by getting rid of the massive storage/bandwidth demands of 1 terabyte free accounts and gaining more paid subscribers, this will allow Flickr to do this important work to continue making Flickr the best photo sharing site on the internet for all of us who are a part of the Flickr community and love the site so much.

I do understand that people don’t always want to pay for things, but I think that the right people will pay for Flickr because it provides them tremendous value. I pay for my Adobe Lightroom subscription. I pay for my Netflix account. I pay for these things because they provide me value. This is also why I pay for Flickr and will continue doing so many years into the future.

Unfortunately as we have seen with services like Friendfeed (purchased by Facebook) or even Google+ (in the process of being killed by Google) social networks oftentimes get shut down. It is very important to me that Flickr remains profitable for the long-term so that I can count on it being there many, many years from now. I think yesterday’s decision helps make Flickr more economically viable and sustainable many years into the future.

[disclosure, I know people and have friends that work at both Flickr and SmugMug]