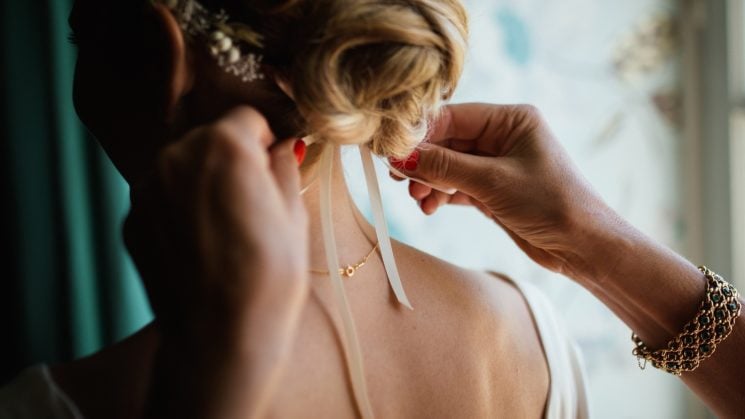 If you are a wedding videographer, there are certain types of shots you absolutely shouldn’t miss. Every wedding begins with the prep, and Rob Adams of Adorama shares five essential shots you should definitely capture before the ceremony begins.

There are plenty of beautiful details to capture during the prep of the couple. Rings, jewelry, hair piece, DIY things they’ve made, shoes, the dress… Make sure to film these while the bride and groom are getting ready.

As the bride and groom are putting their final touches before they head out to the ceremony, you should film these moments. This is the chance to put them in some great light. You get to choose whether it’s gonna be dramatic, or diffused, light and airy. Get some details here as well, such as the groom’s bowtie and the bride’s dress details.

Bride and groom prep isn’t just about the bride and groom. There are friends and family members there as well, even pets. So, shoot a lot of that stuff: the bride wants to see other things than herself when watching the wedding video. Film the dog, the cat, the bridal party hanging out…  All those shots will give your edit more depth and versatility.

4. The reveal of the bride

There are few moments as emotional as the one when dad sees the bride on her wedding day. Plan this moment ahead of time: know where you’re gonna be standing and put the bride in a good light. When the dad walks in, make sure that you’re ready to capture his reaction. Keep in mind to film the dad first as he sees the bride, so you can capture the genuine reaction. Then move around and get other shots to give the scene more movement.

Sometimes a simple shot of the bride and groom leaving the house can get your edit to the next scene smoothly and creatively. Rob gives a few examples: filming the bride as she goes down the stairs from the low angle, letting the dress slide off the stairs. As for the groom, you can film him and the guys walking down the streets in the city. If you’re riding with the bride and groom, get shots of the active moving to the next location. The variety is endless here, and these shots are great to tie the two scenes together in your final video.

There are plenty of ways to film these shots, but keep in mind that they should be included in the wedding video, no matter how you take them. Always plan ahead and create a variety of shots, so you’ll have a lot to work with and get the best end result that both you and the newlyweds will like.