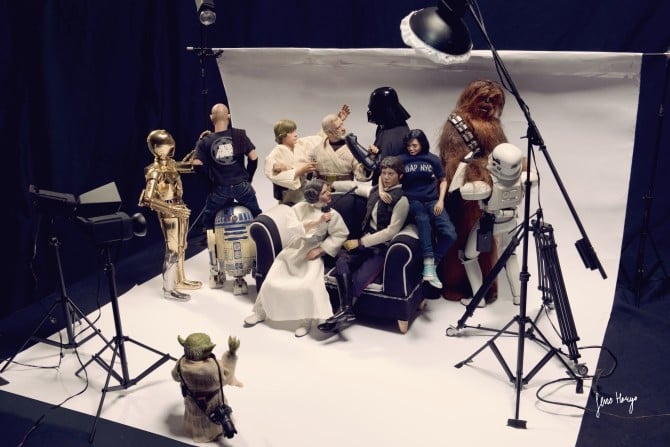 What if your pre-wedding shoot was so dangerous, exaggerated and complex that there was no way you could actually participate in it? This is exactly what append to Indonesian Photographer Seno Haryo. His idea for a pre-wedding shoot involved, some avengers, a collapsing New-York, Dinosaurs, Dianna Jones and other such heroes.

Seno had no choice but to convert himself and his wife-to-be into 3D figurines and construct dioramas for each of the shots planned.

The first phase was to build two 3D actions figures that looked like Seno and his fiance: 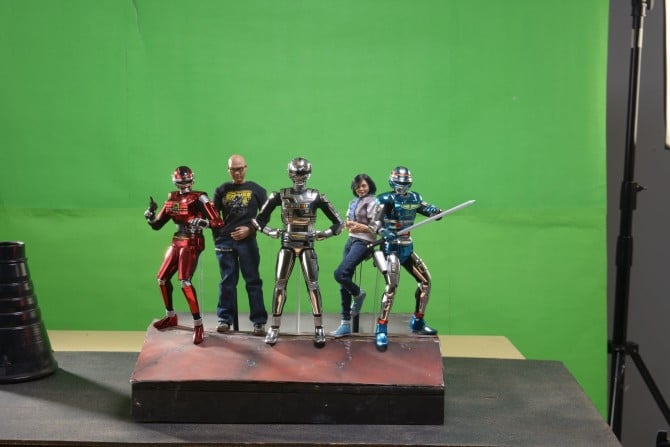 The figures were built by Seno and his friends where each friend took after one part of the figurine: Hair, Face, clothing and so on. Gotta admit, they look pretty good at 1/6 size.

Beside Seno and wife, the figurines came mostly from 1/6 toy manufactures like Hot Toys, sideshow and 3R. Some of the figurines had to go under extra customization to match the set.

Next a set of dioramas was build at 1/6 scale, and the figures were carefully placed inside. 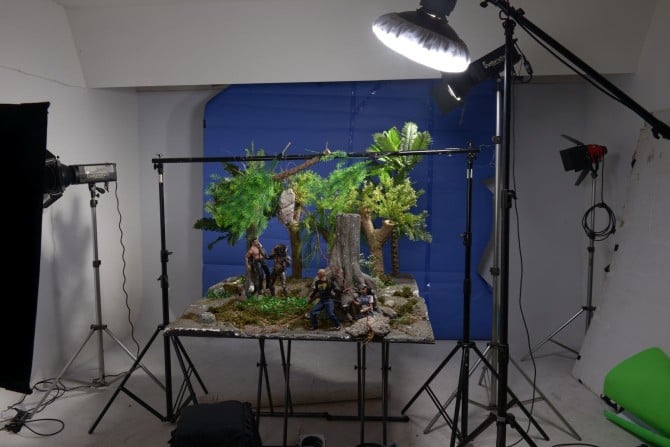 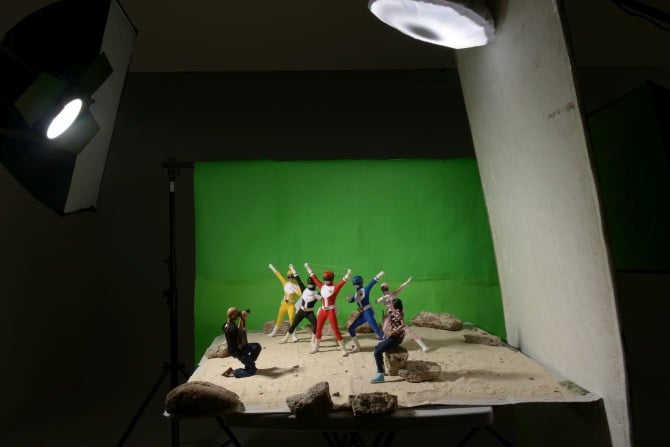 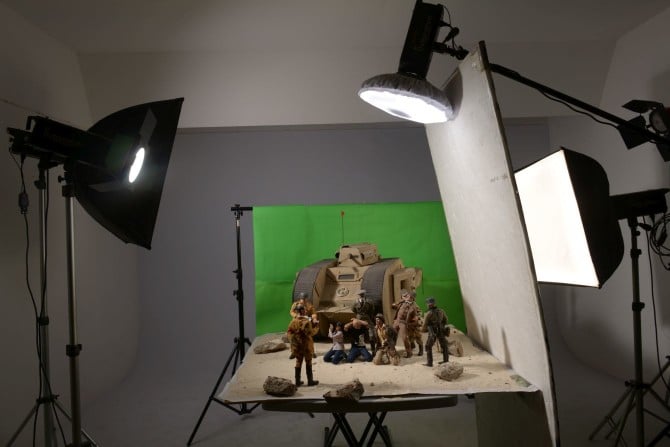 To make this even better there is a story: 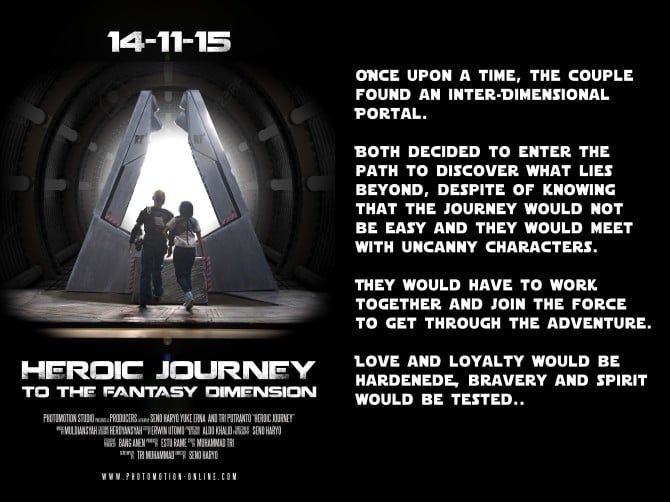 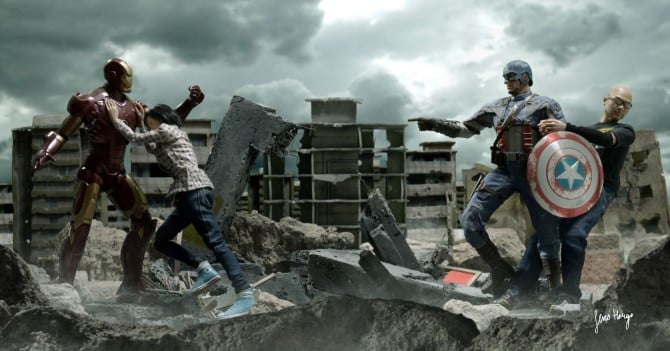 1.CIVIL WAR – The couple arrived in Marvel Universe and got in the middle of a Civil War. Conflict between Captain America VS Iron Man lead to a war among the superheroes. They tried their best to mediate the conflict, to no avail. 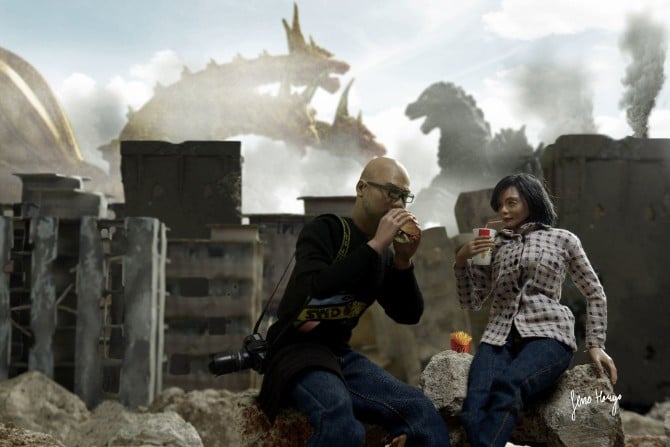 2.LEISURE AMIDST MAYHEM – In Japan, while they were enjoying a down time, DesGhidorah suddenly appear and was immediately met with Godzilla. 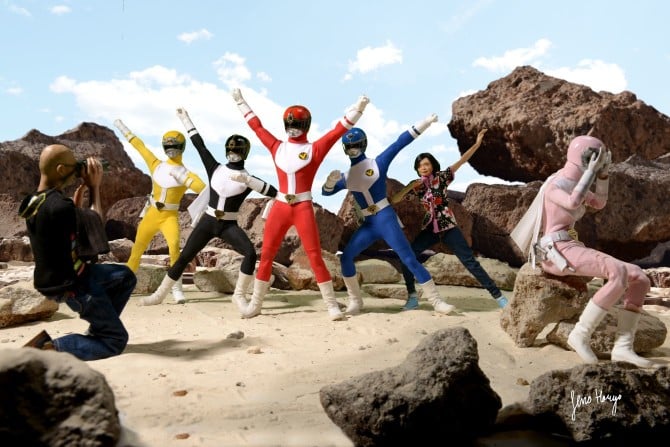 3.STEALING THE SHOW – pink power ranger was sad because she couldn’t join her team in a special photo-session. 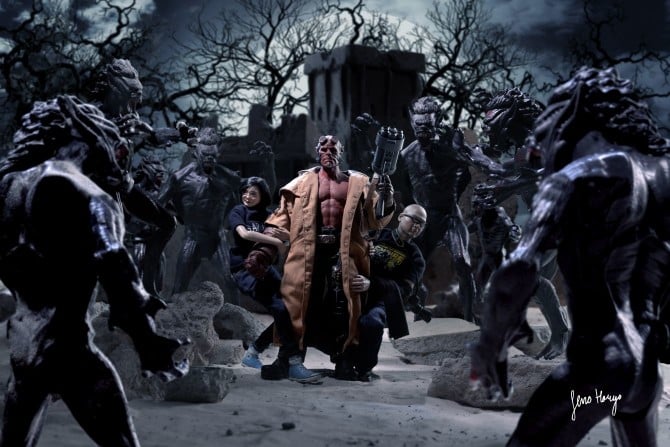 4.THE DARKSIDE IS NOT ALWAYS BAD – Hellboy saved the terrified couple from werewolves. 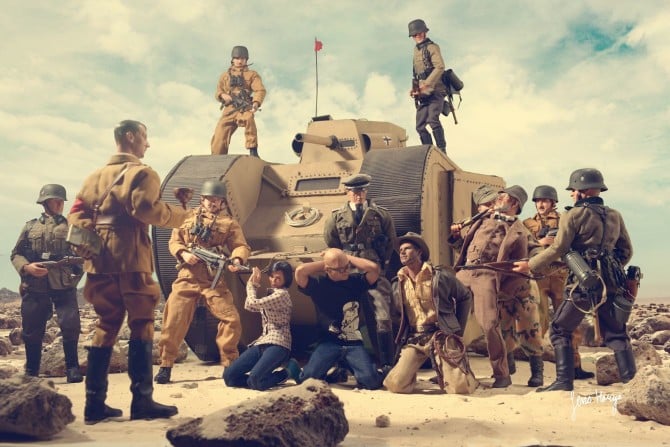 5.THE FAILED CRUSADE – Indiana Jones was trying to save his father, Professor Henry Jones and protect the Holy Grail from the Nazi. Unfortunately, they were unsuccessful because of… these two people. 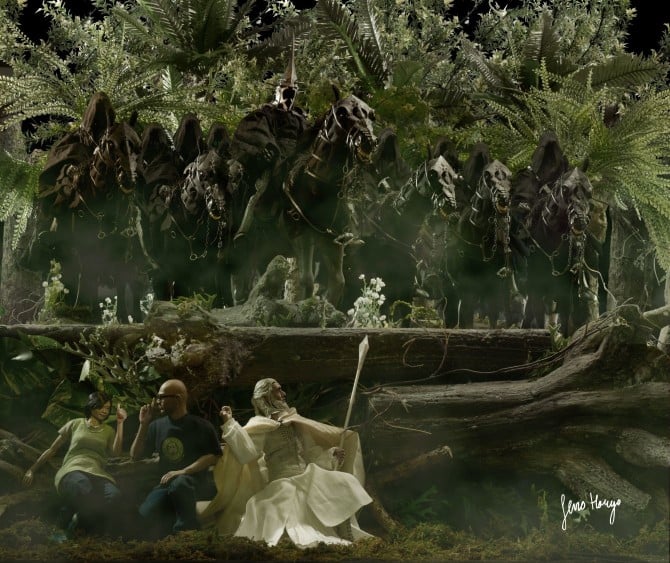 6.THE FELLOWSHIP OF WIZARD – Chased by Nazgul and the Wraith, the Fellowship hid themselves. With the help of the White Wizard, Gandalf, they had to bring the Ring to Mordor. 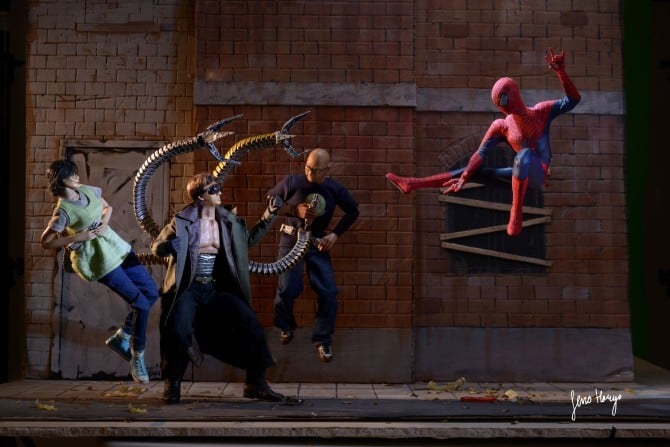 7.A TANGLED WEB – Involved in a complicated situation, between Spider Man and Doc Oc. A chaotic photo shoot of Episode IV. Master Yoda was not in it, so instead, he became the photographer.

8. A CHAOTIC PHOTO SHOOT OF EPISODE IV – Master Yoda was not in it, so instead, he became the photographer. 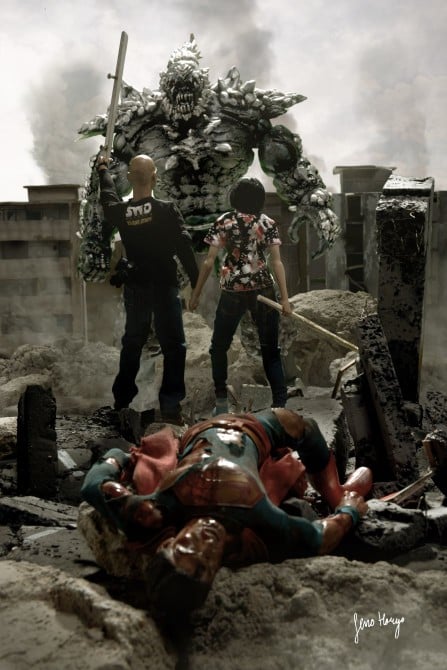 9.THE DEATH OF THE MAN OF STEEL – Somehow… These reluctant heroes thought they could help protect Superman from Doomsday. 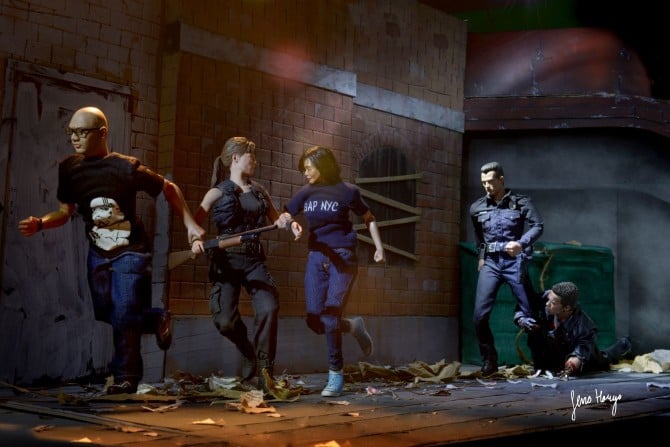 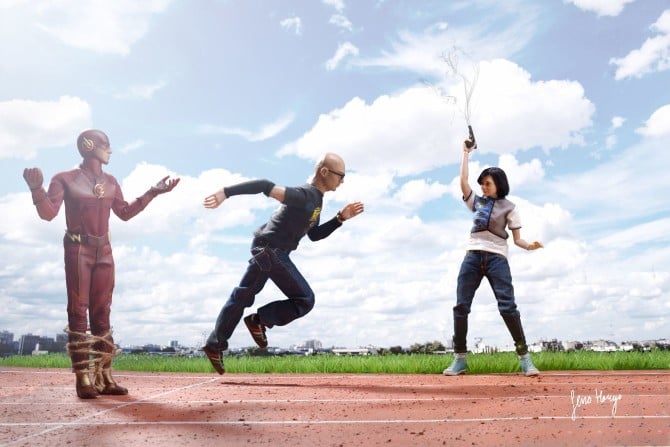 11.THE FASTEST MAN ALIVE – Baldy found a way to win the race against the Flash. 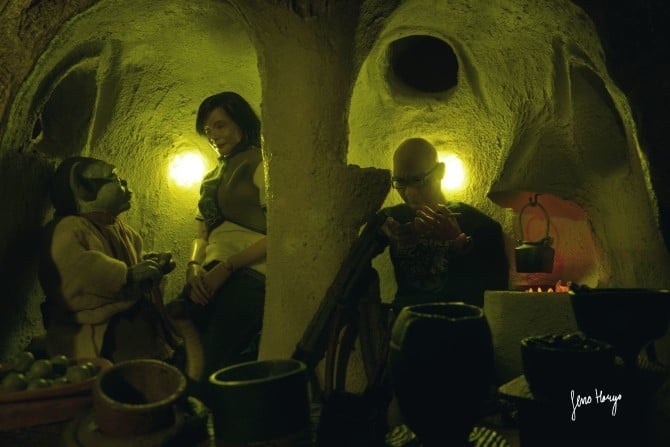 12.LEARNING ABOUT THE “FORCE” – Visiting Dagobah to learn about life from the Master. 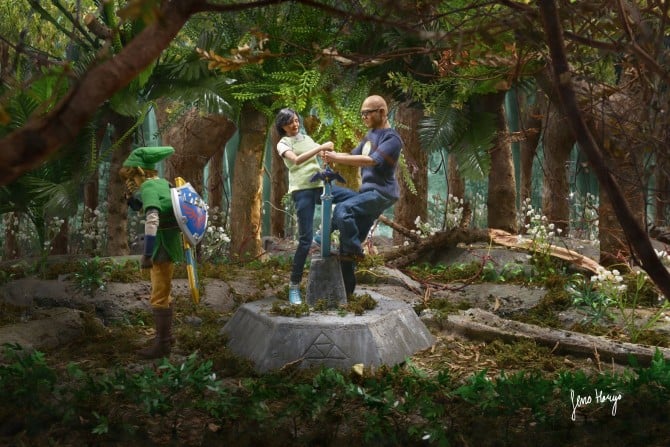 13.THE BLADE OF EVIL’S BANE – These two “Hylians” tried their luck to wield the Master Sword. Legend says that only the Chosen Heroes can. Are they the chosen ones? 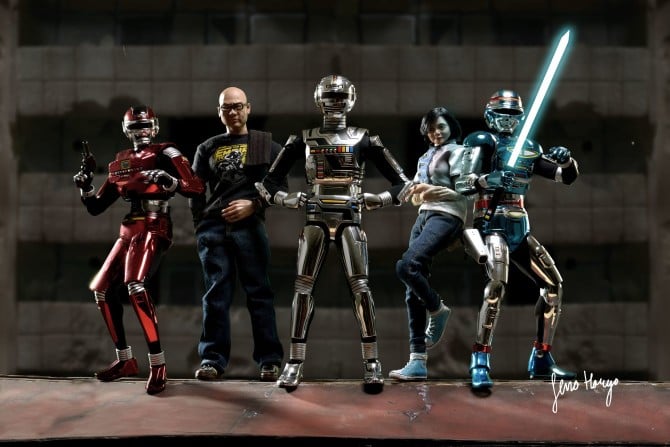 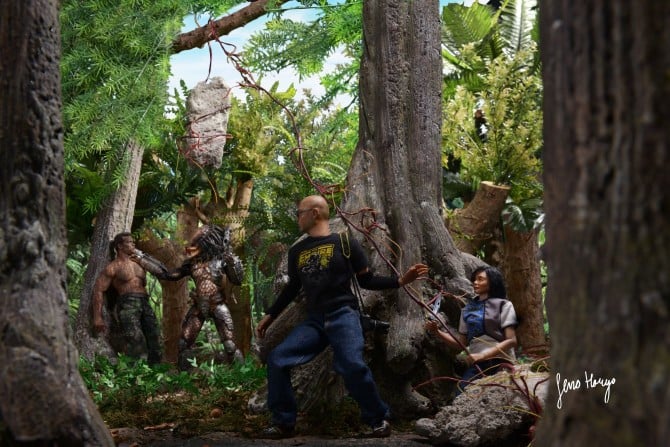 15.HUSTLE IN THE JUNGLE – The Commando Couple helped Dutch trapping the Predator.

I am not sure what the honey moon will look like after that….

Here is a short video showing what the shoot involved:

P.S. a similar shoot we featured not so long ago featured a similar concept only in the Star Wars world. (there, the action figures were only the movie characters.)