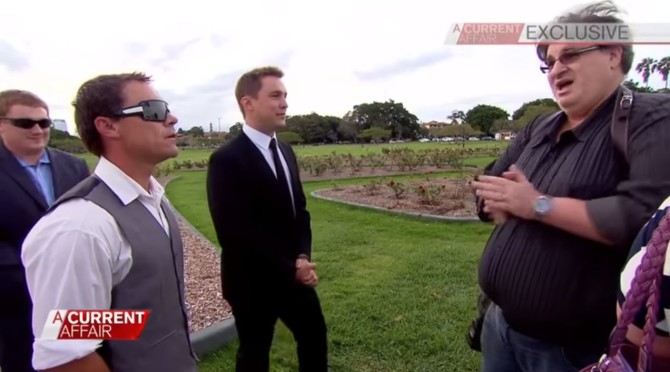 TV show A Current Affair was contacted by several angry newlyweds who claimed that Australian wedding photographer Justin Hollow ruined their special day for them. Current Affair did what any TV show would do: put all the brides (wearing their wedding gowns) on a bus and go to confront the photographer.

According to the video, some of the newlyweds never received their photos, a year after the wedding, some were bullied because they were “not smiling correctly” and other were entitled for a refund and never got it.

According to A Current Affair, when Justin was confronted by the newlyweds, he threatened them that he would delete their photos and report them to the police.

The video description says that one of the stories goes as follows:

Kirsty and Joel are also waiting on a refund. A Current Affair has withheld the couple’s surnames after Mr Hollow made unfounded claims Joel’s stepfather, Greg, was a paedophile – which he is not and has never been accused of being a sex offender.

After Greg became involved and attempted to secure a refund for the couple, Mr Hollow sent him messages which included: “Your name comes up on a sex offender list”, “it says you molest kids”, “I’m happy to link that to social media if you like” and “I don’t like kiddy fiddlers”

Many of the stories involve alleged cancellations without providing refunds, and extreme delays in providing deliveries. One bride went to court and as a result, Justin Hollow allegedly threatened the couple to tell the police that the bride has been drinking on the beach…. On the shoot.

There somewhat of a happy ending to the story, some of the couple have received their packages after A Current Affair got involved. According to A Current Affair, Mr Hollow has been banned from being a member of the Australian Institute of Professional Photography and is also being investigated by the Queensland Office of Fair Trading. But this will not bring the photos and videos to the couples.

Of course, the question is whether the right way to deal with an issue like this is to load a bus full of angry brides.