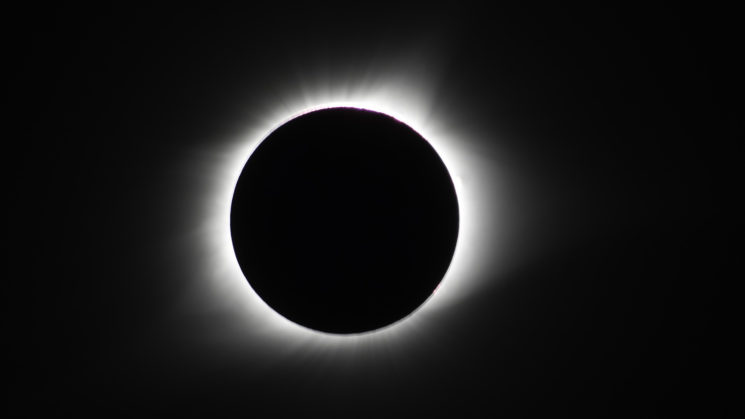 This time last year, the total solar eclipse made millions of people stop, observe, film and photograph the breathtaking sight. Photographer Jon Carmichael captured the totality from an airplane and made it look like the photo was taken from space. Many people have described it as “the most amazing image ever taken from a commercial airplane.” And now, Carmichael shares the equally amazing story that follows this awe-inspiring photo.

In an interview with Inc., Jon Carmichael describes himself as a “big space nerd.” When he was a kid, he realized that he would have a chance to live through a total solar eclipse. And when 2017 arrived, as a pro photographer, he didn’t want to miss the chance to capture it.

Carmichael had spent some time figuring out how to get as high above the ground as possible during the eclipse. The first idea was to enter Alaska Airlines’ contest for a seat on a plane that would fly the perfect path to observe the eclipse. He created a video for the contest, and he says he was “devastated” when he didn’t win. But then, he figured out his plan B.

The photographer mapped flights and paths of other airlines. He came to the conclusion that a Southwest Airlines flight from Portland to St. Louis would be just perfect. But there was a problem. As Southwest didn’t have assigned seating, Carmichael was afraid that he wouldn’t get a window seat. Considering that he had come this far, he brought $600 in cash and was ready to bribe someone for a window seat if necessary. However, the odds turned out to be in his favor.

At the gate, the photographer introduced himself to the Southwest crew and told them about his plan. They gave him seat 1A, and the Captain even cleaned his window for him, so he could take the clearest image possible. Since Carmichael needed a 180-degree view and all he had was a tiny airplane window, he asked the Captain if there was a chance to turn the plane around when in totality. But the Captain told him not to get his hopes up. This could have potentially messed up with his plan. Fortunately, the Captain did turn the airplane around and Carmichael got the view he needed for the photo.

The photographer explains that he “utilized everything he had ever learned with photography in his career in these two minutes of time.” He took over 1,200 photos during the eclipse. When he returned home, he went through the photos to see what he ended up with. Then he realized that, during totality, he was above the Snake River which borders Oregon and Idaho. As a bonus, the weather was perfectly clear.

After all the help from the crew and the luck he had with the weather, this is the final image Jon Carmichael ended up with:

A year ago, millions came together and witnessed one of the most beautiful moments in history. My dream was to capture this from a unique view to remind us of our place in the universe and to stay united in our humanity. Thank you @Twitter for sharing that vision. #eclipse108 pic.twitter.com/AjSzf27xxQ

“My wish is for this photograph to be a symbol of that fleeting beautiful moment and remind us that we are all part of something bigger than ourselves. I hope it inspires people to take care of each other, our planet, and to keep looking up.”

The photo is titled 108. Personally, I love the image as it really makes me feel humbled. And after reading all that took to make it, I’m even more impressed. On Carmichael’s website, you can zoom in and explore it in details, or order prints.