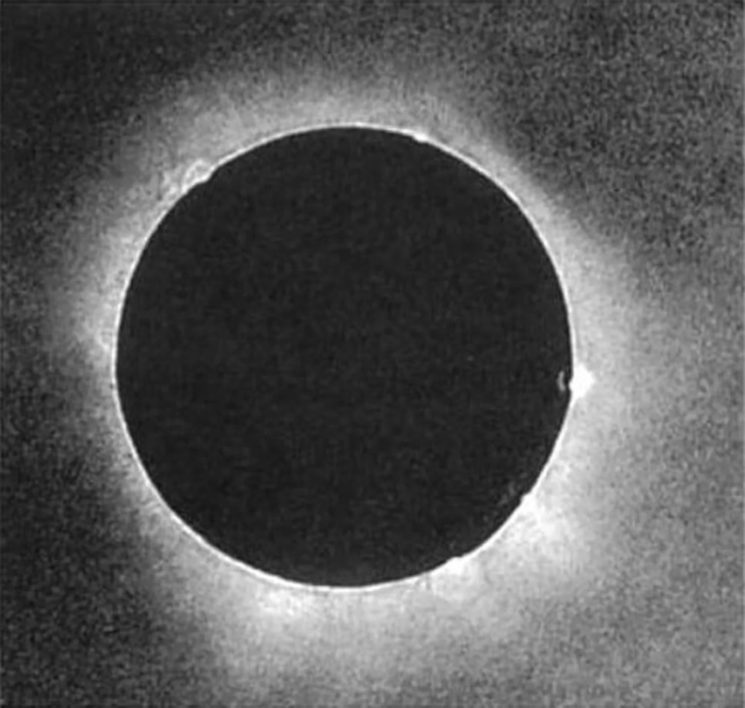 Total solar eclipse is coming on August 21, and I guess your cameras and protective filters are ready. But before you start filming or photographing this phenomenon, would you like to see the first ever photo of it?

Prussian photographer Johann Julius Friedrich Berkowski was the one who took the first correctly exposed daguerreotype of total solar eclipse. It was on July 28, 1851, in Königsberg (now Kaliningrad). No one before him managed to do it; it’s not an easy task even today. But Berkowski made a breakthrough 166 years ago.

Berkowski was a local daguerreotypist, and the Royal Prussian Observatory commissioned him to capture the total solar eclipse. No one before him did it, as the photos would turn out under or overexposed, or there was an insufficient contrast between the corona and the moon.

As published in the Acta Historica Astronomiae, Berkowski used a small refracting telescope, attached to the hour drive of the 15.8-cm Fraunhofer heliometer. The exposure time was 84 seconds, taken shortly after the beginning of totality. According to the same journal, A. Busch, the director of the Royal Observatory, observed the eclipse at Rixhöft. Later on, he published some details about the daguerreotype Berkowski had captured – but without mentioning his first name.

Busch ordered R. Trossin, a local artist, to make an enlarged steel engraving from Berkowski‘s daguerreotype plate. As for Berkowski, he made some daguerreotype reproductions of the original plate himself. To this day, one of them is still preserved at Jena University Observatory.

166 years ago, a truly impressive photo of the total solar eclipse was made. And today, we are only weeks away from the opportunity to make our own (at least you guys in the US). So, get your gear ready, and don’t forget to keep yourself and the camera safe.