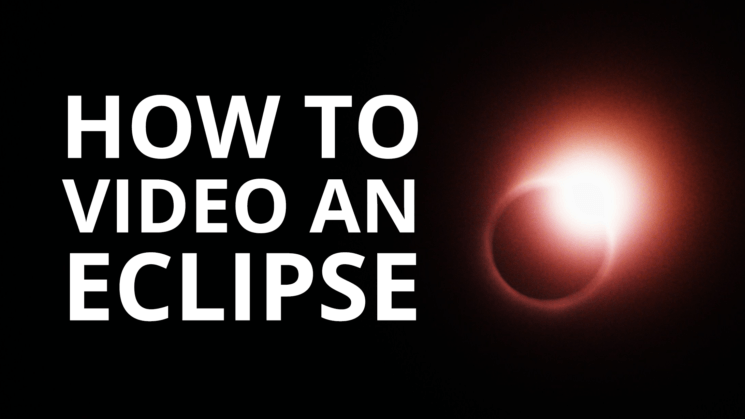 Total eclipses aren’t actually as rare as many people think, happening somewhere on earth about every 18 months or so. But to have them appear over a particular part of the planet, or even a specific country, isn’t quite as often. But, there’s is a total solar eclipse happening over the USA in a couple of months. Monday, August 21st, to be precise. For many Americans, this will be a once in a lifetime event.

Destin Sandlin from YouTube’s SmarterEveryDay has, naturally, had this event at the forefront of his mind recently. So, he went to interview some people about it to find out more from a science perspective. But Destin also had a chat with eclipse fanatic and creator of the Solar Eclipse Timer app, Dr Gordon Telepun, MD, to find out how best to capture the event on video.

Gordon explains the technique to Destin via a series of printed slides. He calls it the “drift method”. The goal is to have your camera pointed at the right part of the sky in advance. Then the sun just drifts across the frame fro the entire event, which Gordon says takes about 7 minutes in total. He also suggests practising in advance on a regular sunny day to get the timings and field of view just right.

Other than making sure you’re in the USA, the first step is to get hold of a glass solar filter. Without it, you could fry your camera’s sensor exposing it to the sun for such a long duration. Lenses act like magnifying glasses, and we’e all seen what that does to ants. Once you have your filter, though, it’s time to make a template to go on your camera’s live view LCD. 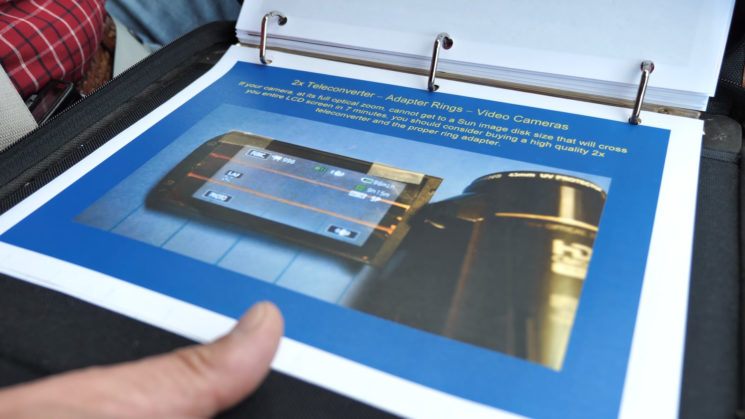 Gordon tapes a small piece of acetate over the LCD. He then uses a gold Sharpie to draw out the lines that frame the area in which the sun should travel. Gold works well for this, as the sky becomes black very quickly when you expose for the sun.

The sun should travel across the frame, left to right, in a total of about seven minutes. If using a traditional camcorder, Gordon suggests using it at its maximum optical zoom setting. If, at maximum zoom, it takes much longer than seven minutes for the sun to traverse the sensor, pick up a 2x converter. 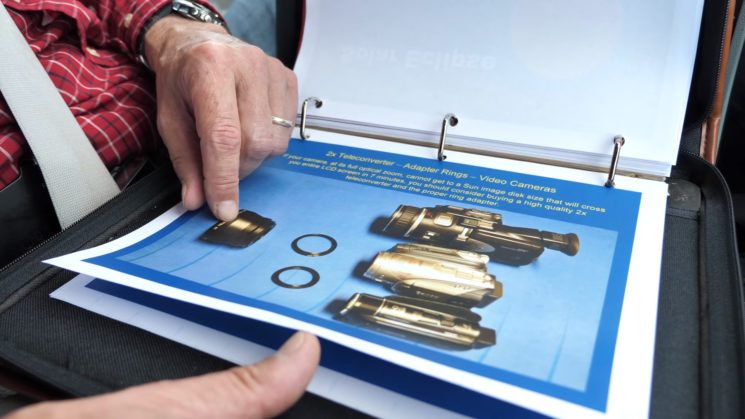 For DSLR and mirrorless users, you’re looking at a very long lens. The moon moves across the sky at approximately 15 degrees per hour when directly overhead. This is due to the rotation of the earth. So, for a seven minute chunk of time, that’s around 1.5-2 degrees. You’re probably going to want at least a 300mm lens if shooting with a crop body, and around 500mm with a full frame. Possibly longer.

To figure out exactly what you need to do, though, the only way is to practise.

On the day of the eclipse itself, the shooting will involve a little interaction. An total solar eclipse has four phases.

You start with the glass solar filter over the lens, and about 20 seconds before C2 you remove it. Then put it back over the lens after C3.

For much of the USA, Gordon says the eclipse will be horizontal. That’ll be that the sun will be moving roughly parallel with the horizon throughout the event. For those on the far east and west coasts, it’ll be a little different. On the west cost, it will be a rising sun, and on the east cost it will be a setting sun. So, you’ll want to angle your camera to compensate for the sun’s apparent movement direction.

Again, though, this can be determined in advance with practise. Just head out around the same time as the expected eclipse on a sunny day (don’t forget your solar filter), and watch how the sun moves through the sky. Then you can figure out the angle your camera needs to be set to.

The total eclipse won’t be visible for me here in the UK, although apparently we’ll get a teeny tiny partial eclipse. I’m very much looking forward to seeing the photos and videos that others shoot during this one, though. Technology has come a long way in the last couple of years, and this will probably have the largest camera-owning audience of any eclipse in history.

« Beginner photographers, these are 7 important tips for you in only 3 minutes
Don’t mind the gap – The ethics of retouching school photography »