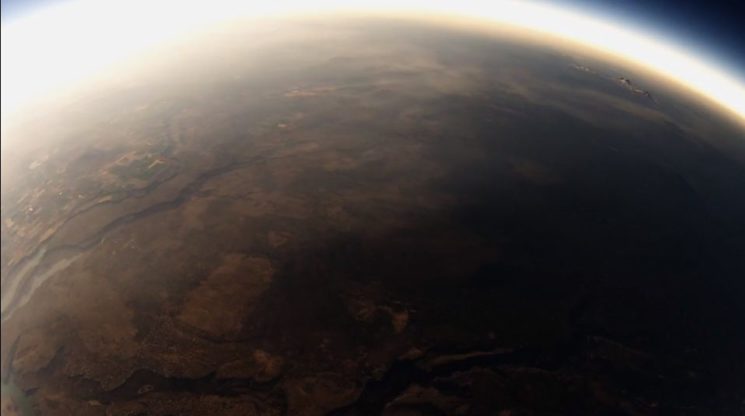 We’ve seen many photos and videos of the total solar eclipse so far, but there’s still something to impress us. For example, a video of total solar eclipse recorded from a stratospheric balloon. Liem Bahneman took this video, and it provides an interesting view of the Earth from near space during the eclipse.

As Liem explains, he launched a camera-laden balloon before totality passed over Central Oregon:

There were three still cameras (one being a Ricoh Theta 360) and a GoPro recording video. This is the edited video, showing launch, the shadow of totality passing, and the last 40 seconds or is the last of the footage before the battery died.

His estimate is that the balloon was at 50-60,000 feet at totality. As he points out, this was far from where he wanted it, as he was hoping for 90-100,000 feet. Still, the video is very impressive to watch. We’ve seen the view of the solar eclipse from space, but I find Liem’s video more interesting. You can see the darkness slowly taking over the landscape, creating quite an eerie feeling. It looks like a scene from some sci-fi movie.

Liem had tree specialist in Bend to retrieve the payload after the cameras landed in a 60-foot tall ponderosa and on the ground. So, hopefully, we’ll get to see the photos as well. If you’d like to stay up to date with Liem’s work, make sure to follow his blog.

« How I made a timelapse of total solar eclipse while still being able to celebrate with my family
NASA orders 53 unmodified Nikon D5 cameras, sending some of them to space »