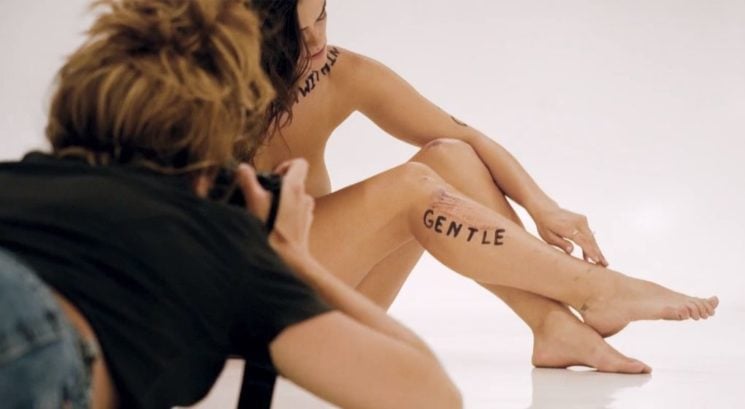 For its 2018 Swimsuit Issue, Sports Illustrated has taken a path quite different from its traditional route. For the project titled “In Her Words,” the magazine didn’t pose models in swimsuits. Instead, they’ve launched fully nude, unedited, black and white images of models, with messages to society written on their bodies. The project features women of all shapes and sizes, and it has caused a lot of reaction, both positive and negative.

As Sports Illustrated says on the project’s webpage, they wanted to share a “special message.” They handed over creative control of the shoot to the women who are their brand, and the set was made up by an all-female crew. According to Sailor Brinkley Cook, this made her feel comfortable to pose nude. Judging from the stories other models told Sports Illustrated, it was the same for them too. It was a “ladies’ party”, and Taylor Ballantyne was in charge of taking the photos.

The models were supposed to write the words on their bodies, and they were free to choose them on their own. Paulina Porizkova was the first woman from Central Europe to feature on the cover of the Sports Illustrated swimsuit issue. Now she has been photographed for it again, and just like Sailor Brinkley Cook, she had a hard time deciding which words to have written on the canvas of her body. “The words I chose would represent me. Who I am. Who I think am, who I hope to be,” she told Sports Illustrated. She added that the photos from the project “weren’t sexy or coy, just vulnerable and honest.” The beauty of these photos wasn’t in the perfection of the bodies, but “quite the contrary, it was in the confidence and bravery it took to reveal their imperfections.”

The project features women of all body shapes, with all their imperfections and the beauty they carry. They chose the messages to write on their bodies, and Taylor Ballantyne and the crew did a great job with the photos. Of course, the comments are different and opinions are divided.

Some readers have commented that they have  “already seen” projects like this and that nudity doesn’t send a message. Some people have also expressed the belief that Sports Illustrated is taking advantage of the #MeToo movement. On the other hand, there are people who have praised the project for sending a message, for embracing imperfections and not being ashamed of them. Personally, I think that the idea of the project is not entirely new. Still, I like unedited photos that show we don’t all fit the same mold and that we’re beautiful despite our imperfections.

If you’d like to read more about the project, see the photos and read the models’ stories, head over to Sports Illustrated. I remind you that all photos are nudes, so better not to open it at work.

Behind The Scenes with Sports Illustrated, Will Smith and Michael Grecco

« The beginner’s guide to using grids with softboxes
Do photojournalism contests glamorize pain and suffering? »