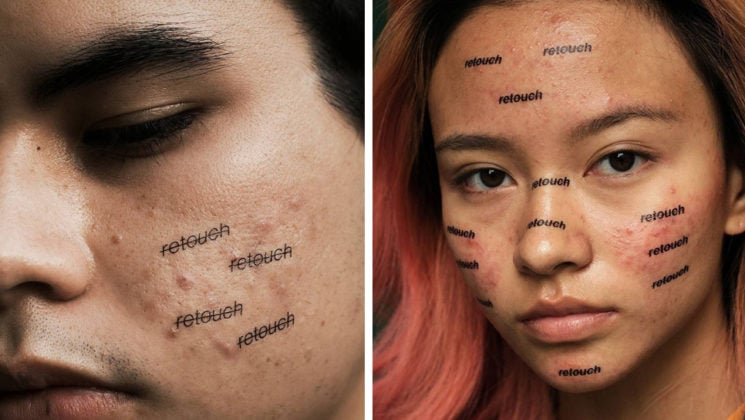 In recent years, the trends in retouching photos have been changing. Altering someone’s appearance isn’t so welcome anymore, judging from the recently reformed guidelines at CVS Pharmacy and Getty Images. Young photographer Peter DeVito has shared a photo series that goes along with these trends, but he’s taking it a step further. In his portraits, he has left the acne unretouched. His goal is to send the message that “acne is normal.”

20-year-old DeVito admits that he’s struggled with acne for a while. In 2017, he took “barely any pictures” of himself because he hated the way his skin looked. He says that recently his skin condition has been getting progressively worse. However, he wants to show that having acne is normal. He’s working on a project that portrays acne in a more positive light. It should encourage anyone dealing with this problem to see themselves in a different light.

As Peter told Elle, the body-positivity movement inspired him to start this series. Since he started posting the images, he has received plenty of messages from his followers. It seems that the photo series has affected many people to see themselves in a more positive light. And Peter hopes that “people will just start to learn to accept themselves more and not compare themselves to what other people look like.”

Now, as someone who has had acne, my opinion about this project and normalization of acne is twofold. First of all, I wouldn’t agree with “acne is normal” as a general statement. It’s normal when you’re a teenager, we’ve all been there. But at a later age, acne can be a symptom of more serious health issues. If you’re still dealing with them long after your teen age is over, of course, you shouldn’t think of yourself as less beautiful, but you should check your health.

On the other hand, at a very young age – I guess having acne is normal. As teenagers, we all go through hormonal changes and our body reacts to them. But, self-conscious as they are, young people feel ashamed of their skin and see themselves as less beautiful than they actually are. From this perspective, I believe Peter’s project is fantastic and empowering for the young people. You can’t do much about acne while your hormones are running wild, but there’s nothing to be ashamed of and there’s no reason to feel less beautiful. Still, take care of your health, both as a teenager and as an adult. Your body and your skin will be thankful.

« Five reasons why you shouldn’t give RAW files to your clients
I’ve been sharing my photography for free on Unsplash for the past 4 years, here’s what I found »