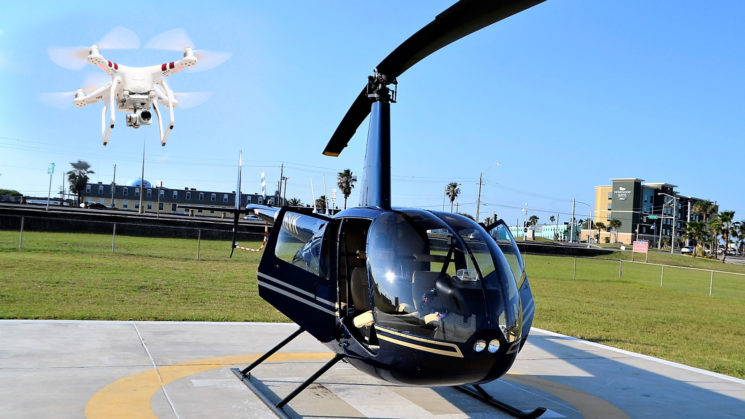 After a drone collides with a US Army Black Hawk helicopter just last month, we’re already hearing about another incident involving a helicopter and a drone. This time, though, the helicopter was forced to make a crash landing. The incident is currently being investigated and if proven to be true would mark the first drone-related crash of an aircraft in the USA.

According to Bloomberg, during a flight last week involving a student pilot and instructor, a drone was spotted in front of their Robinson R22 helicopter during a flight. This forced the instructor to take over and take corrective action to avoid the collision, hitting the tail of the helicopter into a tree and causing a crash landing.

The NTSB is aware of the pilot’s report that he was maneuvering to avoid a drone, but the NTSB has not yet been able to independently verify that information.

According to reports, an FAA statement says the Robinson R22 helicopter went down at around 2pm, but they did not confirm the whether or not a drone may have been involved.

According to a police report of the incident, the student was practising low-altitude hovering in a remote area. As she turned the aircraft around, a small white drone appeared. It was at this point the instructor took over the controls in an attempt to manoeuvre the helicopter away from the drone.

They say that the drone in question appears to possibly be a DJI Phantom, although no idea which model. The drone and its operator have not been located. DJI do say, though, that they are looking into the incident and are ready to assist investigators. Obviously, anything they may find can’t be posted publicly as this is currently an ongoing investigation.

I think it’s pretty clear that incidents like these are only going to become more common as drones get into the hands of even more people. So, it’s only reasonable to assume that they’ll also get into the hands of more idiots causing issues like these. One can only hope that they start to wise up before ruining things even more for the rest of us.

« DPRSplit lets you pull more dynamic range out of your Canon 5D Mark IV raw files.
Ten things you must be good at to be a pro photographer »