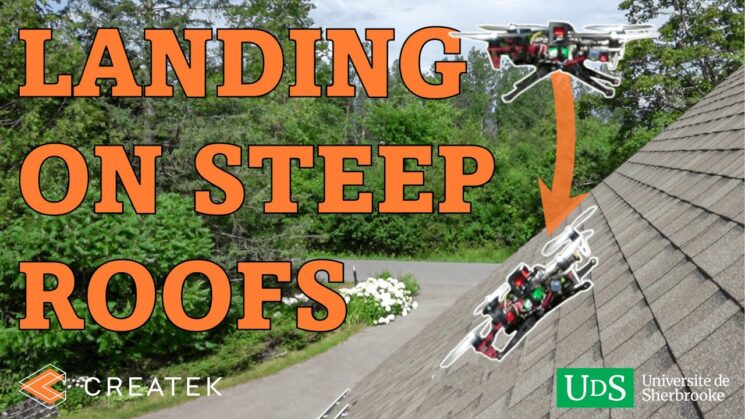 Researchers have developed a new landing system that allows drones to land in rough conditions, even on surfaces sloped as steep as 60 degrees. That’s great news for any drone operators out there who don’t fly in 100% ideal situations. Although most drones are able to land themselves, their automated landing systems require a flat landing site, minimal winds, and low speeds to safely touch down.

Researchers at the Createk Design Lab in the Université de Sherbrooke in Quebec, Canada noticed that most drone makers assume that landings will be performed in ideal conditions at optimal locations. Due to this, they rely on rigid landing gear that doesn’t provide enough friction to steady a drone on inclined surfaces.

The team also noted that landing systems also don’t have enough flexibility built into them currently. This ends up causing the drone to bounce or can cause damage to the craft.

The solution the researchers came up with, as you’ll see in the video, was quite a simple yet clever one. Firstly, by equipping a drone with four landing legs that use friction-based shock absorbers they can dissipate excess energy as the drone touches down on the surface. A small electric motor can actively increase the amount of friction at the moving hinge point where each leg connects to the drone, ensuring there’s no excess energy remaining that could cause the drone to bounce away.

The second solution is to reverse the engines on landing. This is similar to what commercial jet aeroplanes do when landing to avoid overshooting the runway. For the drone, reversing the direction its props are spinning creates a downforce that pushes it onto the surface where it’s landing to further minimize any bouncing or deflections while increasing friction to bring it to a stop faster.

That’s great news for anyone who keeps crash-landing their drones. Now if only they could invent a safe water landing!

« Luminar Neo reveals its next two extensions: Upscale AI and AI Background Removal
Vero: the Instagram alternative that photographers are flocking to »