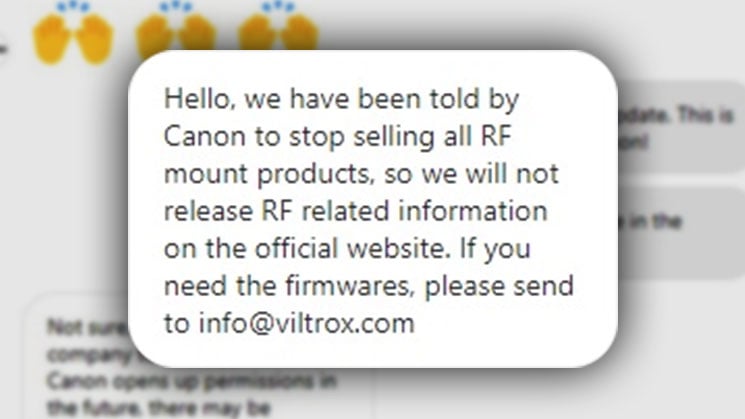 If you wondered why major third party lens manufacturers like Sigma and Tamron hadn’t released any RF mount lenses yet, this might explain it. It seems that Canon is being a bit heavy-handed when it comes to those manufacturers that do. At least, that’s the case according to Viltrox who told a customer that Canon has told them specifically to stop selling “all RF mount products”.

The statement came from Viltrox in an Instagram conversation when a user enquired as to why he couldn’t download the firmware for Viltrox RF lenses from the Viltrox website. Viltrox said that Canon told them to stop selling RF products. A screenshot was posted to the DPReview forums by user EJ Fudd. This might also explain why Samyang’s RF mount autofocus lenses suddenly disappeared last year, too. 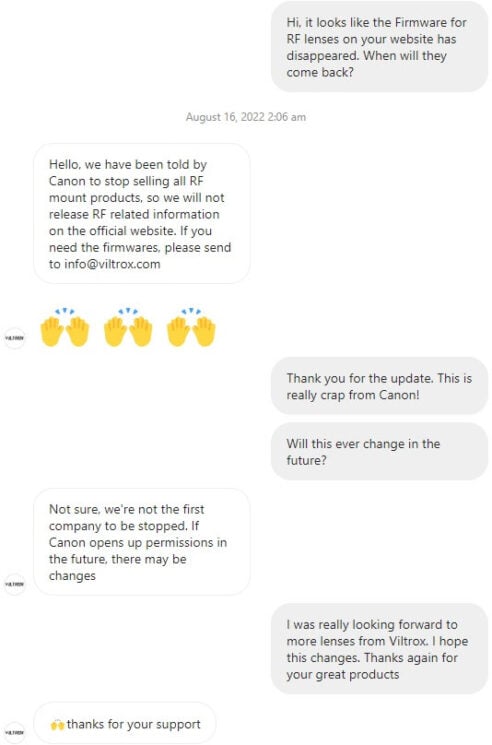 It’s interesting that the only 3rd party RF mount lenses that appear to have been taken off the market are autofocus lenses. As to why this is, is unclear but it may be down to simple patent enforcement. A European Patent Application shows the RF mount in great detail and while it primarily relates to the mechanical properties of the system, the actual concept of a bayonet mount for camera lenses far pre-dates this patent and would be unenforceable if that’s all it related to. But, in conjunction with the electronic communication system, which would be a proprietary piece of Canon software, it would be.

This may be why companies like Laowa, who only produce manual focus lenses with no communication between the camera and lens, may be safe – at least for now. As to how Canon’s attitude might affect manual focus lenses that pass along the focal length and aperture information to be stored in the metadata is unknown. Even though they’re not autofocus lenses, they are still technically speaking Canon’s language.

It’s also interesting that Canon appears to be actively squashing 3rd party lens alternatives for their system when competitors like Fuji have gone from previously having the same attitude to opening X mount up to the world. I can understand Canon waiting to force users to go with their own RF mount lenses, but given the cost of some of them, I can also see this kind of attitude putting some people off buying into EOS R systems altogether.

Sure, there are still plenty of 3rd-party EF mount lenses out there that you can use with an adapter but it’s not quite the same as native glass. Sigma’s new DG DN Art series lenses, for example, perform much better on Sony E and L mount cameras than their DG HSM EF predecessors using EF to RF lens adapters. They’re also completely new designs that fully take advantage of the shorter flange distances. Sigma has said they’re “discussing and researching” the possibility of RF mount lenses, but I wouldn’t count on it any time soon.