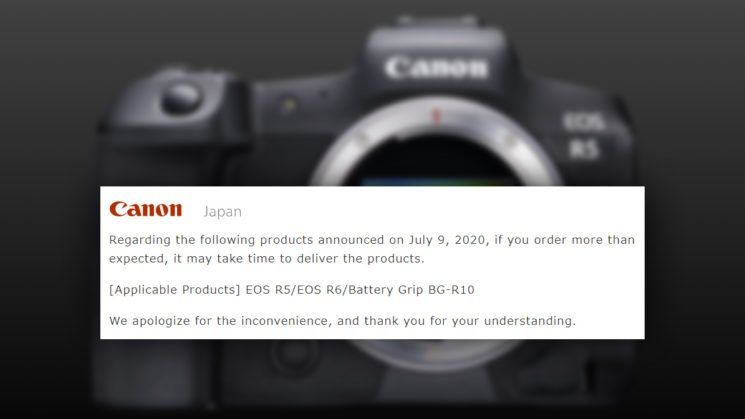 Despite the potential overheating issue for video shooters, it looks like Canon EOS R5 pre-orders have been in much higher demand than Canon anticipated, as Canon Japan has announced that there may be delays in delivery. They say that this delay also applies to the EOS R6 and the BG-R10 battery grip as well.

It’s not really much of a surprise that they’re already in high demand. The hype surrounding the EOS R5 has been pretty immense over the last few months and it along with the EOS R6 both stand as Canon solidly proclaiming “We’re here!” in the world of mirrorless. And with the ongoing COVID-19 situation, delays were already inevitable.

Regarding the following products announced on July 9, 2020, if you order more than expected, it may take time to deliver the products.

We apologize for the inconvenience, and thank you for your understanding.

Both the EOS R5 and EOS R6 are scheduled to start shipping at the end of July and exactly how delayed your pre-order might be is currently unknown. But if they’re already exceeding demand after just a few days, by the end of the month those delays will likely get quite long indeed.

So, if you’ve been on the fence, you’ll want to hurry.

« Vogue under fire over not hiring a black photographer for Simone Biles cover photos
Apple: Don’t close your MacBook if you have a camera cover – it will damage your display »