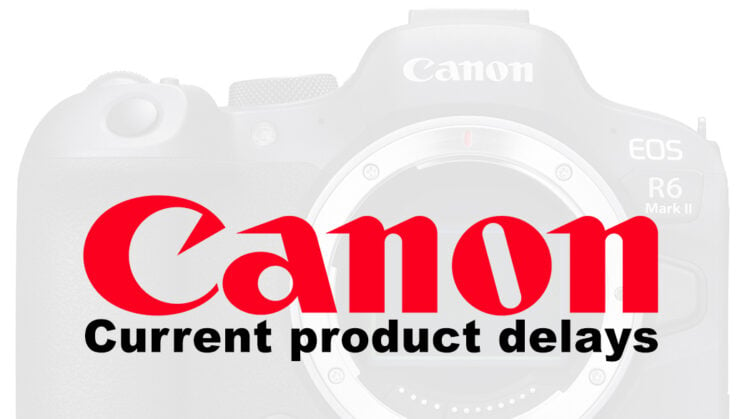 Canon, like just about every other manufacturer, is facing camera shortages. Back in March, they announced a list going over those shortages and what we’re going to have to wait for. The bad news is that list still exists and rather than keep posting new announcements each time, they’re just updating the old one. The new list still contains a number of products, and some of those products remain the same, although there are some new ones.

The good news, however, is that Canon doesn’t mention 6-month+ waits in the list, as they did in March and there are far fewer products on it than this time last year. The list has changed to include new items, though, like the EOS R7 and the EOS R6 Mark II, Canon says that they are shipping in order but may take longer to deliver than usual, but the wait, it seems, perhaps won’t be as long as they have been.

At the top of the previous list in March, with the disclaimer that “it may take more than half a year to deliver when you place a new order”, was the Canon EOS R3 and the RF 14-35mm f4L IS USM lens. They were both also on the original list from last October. Those items are no longer on the list at all. Nor are the RF 16mm f2.8 STM and RF 1200mm f8L IS USM. But, we do see two new cameras added to the list along with the RF 135mm f1.8L IS USM and the newly announced Speedlite EL-5.

Thank you for your continued patronage of Canon products.

Currently, we have received more orders than expected for each of the following products, and due to the impact of global supply of parts, delivery delays are occurring. We apologize for the inconvenience caused to our customers and business partners.

We apologize again for making our customers wait so long. We will continue to take measures for stable product supply so that we can deliver products as soon as possible. Thank you kindly look forward for your understanding.

We are planning to ship in order, but it may take longer than usual to deliver.

It’s no surprise that new cameras have been added to the list. After all, they did it with the EOS R3 only a few days after it was announced, too. Quite frankly, I’m a little surprised the EOS R10 isn’t on there as well. Anyway, the list is a little longer than it was in March and much smaller than it was last October, but at least now, Canon isn’t warning of 6-month+ delays. Exactly how long it will take for you to get your products is unclear, but it should be shorter than it has been.