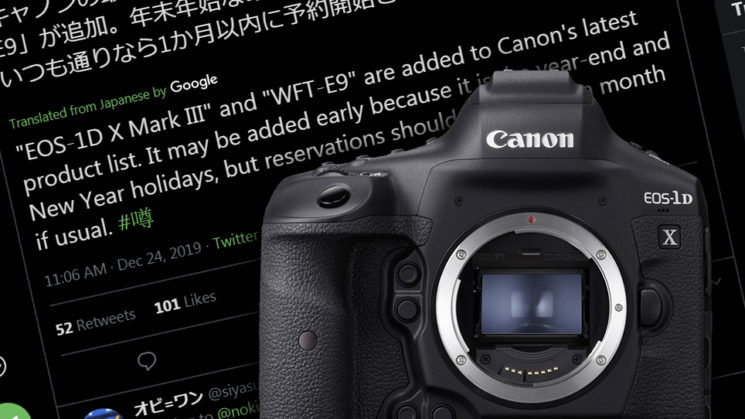 According to a Tweet sent out by Nokishita, the upcoming Canon EOS 1DX Mark III along with the WFT-E9 wireless file transmitter have been added to Canon’s latest product list. They believe that they have been added to the list a little ahead of an official announcement in anticipation of the Christmas and New Year holidays.

That they’ve been added to the list, though, suggests that we may hear an official announcement very soon. This may happen in as little as two weeks, when CES kicks off on January 7th.

“EOS-1D X Mark III” and “WFT-E9” are added to Canon’s latest product list. It may be added early because it is the year-end and New Year holidays, but reservations should start within a month if usual.

Even if the official announcement doesn’t come at CES, Canon Rumors expects it to come later in the month or in early February in advance of the CP+ trade show in Japan starting on February 27th.

Even for a February 27th announcement, this would give four months for the camera to start shipping out and get into the hands of photographers in advance of the Tokyo 2020 Olympics – although I suspect Canon will have plenty of them on-hand for Canon Professional Services members to use during the games for those who didn’t manage to get one or two of their own in time.

In Rio’s 2016 Olympics, the CPS building was packed full of the latest gear, including “racks and racks” of the then-newly released Canon 1DX Mark II.

« Litra Torch 2.0 vs. Lume Cube 2.0 – Action Light comparisson
Need a job? How about personal photographer for a millionaire, travel the world, even bring a friend? »