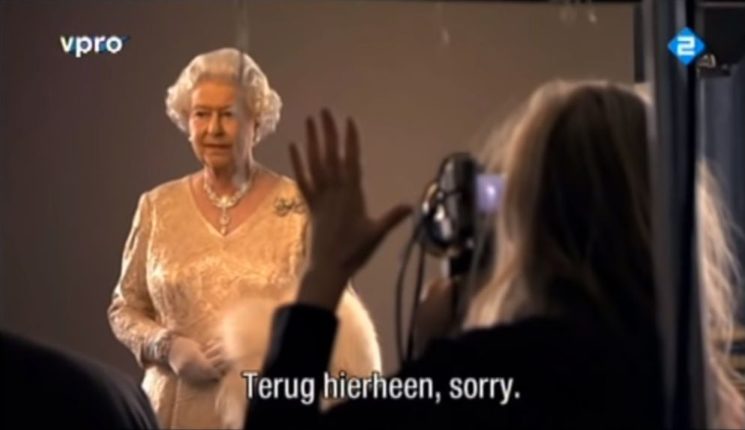 I’m sure you’ve all had difficult and demanding clients and had a hard time directing them during the shoot. But how about making The Queen of England take her crown off for you so you can take a photo? Well, Annie Leibovitz did this, and it’s all saved in a video.

This video is pretty old, but it was recently posted to Reddit and it got lots of reactions. After watching it, I understood why. It shows a photoshoot Annie Leibovitz and her 11 assistants had in 2007. They took the task seriously and spent three weeks preparing for a 30-minute shoot. However, it took longer than expected for the queen to put on her elaborate costume. As a consequence, the beginning of the shoot was delayed by 15 minutes. I guess something can always go wrong, no matter how well you prepare. That’s a useful life lesson, by the way.

Still, despite the delay, Leibovitz had a few different setups in mind even for that short time. She decided for some last-minute changes and asked Queen Elizabeth to take the tiara off for one of the photos, adding that she will look less “dressy.” As one may expect, she got a pretty harsh no and even got scolded by The Queen. But I just love the photographer’s reaction.

Instead of giving up on her idea, Leibovitz just found a way to turn it into a photo. With a smile and in a kind tone, she quickly persuaded The Queen to remove the crown and photographed her without it.

I’m generally a fan of Annie Leibovitz and her work, and this video made me respect her even more. I believe that her attitude is exactly how a professional should act even when they have a demanding client, get scolded, or have their ideas rejected.

« Looking for a free Lightroom alternative, check out the new Darktable 3.0.0
This is why you should photograph your local landscapes more often »