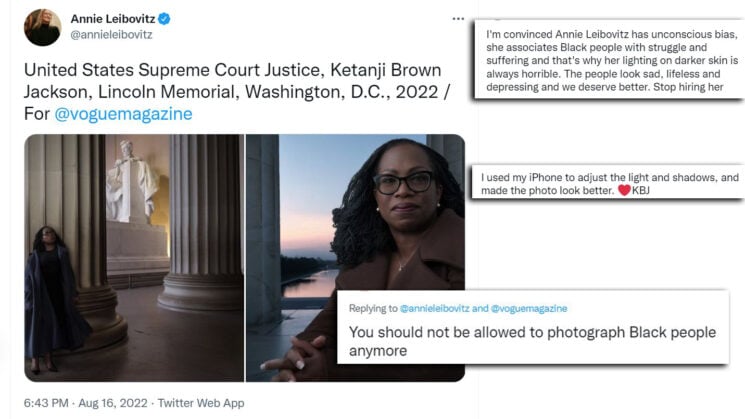 Vogue recently hired famous photographer Annie Leibovitz to take photos of the United States Supreme Court Justice Ketanji Brown Jackson. As perhaps we could have expected after those Simone Biles photos, people were all over Leibovitz over “poorly lit” images.

Many have criticized the photographer over the “poor” lighting of Jackson’s brown skin. Some attempted to “fix” the photos and relight them. And some went as far as claiming that Leibovitz should not be allowed to photograph Black people.

The backlash started when Leibovitz posted the photos she took for Vogue to her Twitter.

As it usually happens on Twitter, people started whining about them and about Leibovitz being “unable to light dark skin properly.” Some of them wondered why Vogue still hired the photographer, claiming that she should be banned from photographing Black people and a Black person should be hired instead. I was honestly surprised with how much anger some of these tweets contain.

You should not be allowed to photograph Black people anymore https://t.co/vXUoMkjUaF

I have no idea why Vogue still allows you to take photographs of Black people. You are one of the most acclaimed photographers of this era and you STILL can’t properly light a Black person to save your damn life. And you’ve been called on this for two decades now and won’t learn.

She doesn’t light them properly and allows them no grace or beauty only stereotypical visual narratives of BW as either “strong” or beleaguered. Enough already.

@voguemagazine, were there no Black women photographers available for this shoot? Shame on you and shame on @annieleibovitz. Justice KBJ deserves so much better.

I'm convinced Annie Leibovitz has unconscious bias, she associates Black people with struggle and suffering and that's why her lighting on darker skin is always horrible. The people look sad, lifeless and depressing and we deserve better. Stop hiring her

Guess which one is from Annie Leibovitz.

HINT: It's not the glowing one of Viola Davis being photographed with care, love, and consideration for her beautiful dark skin.

It's 2022 and we shouldn't be having this conversation anymore. pic.twitter.com/6wt5FIXi1W

Some folks rushed to “fix” Leibovitz’s photos and prove that they know better. Some used Lightroom, and others only apps on their phones. They honestly reminded me of those people in college who always had poor grades in certain subjects yet claimed that “they knew the subject better than professors.”

I used my iPhone to adjust the light and shadows, and made the photo look better. ❤️KBJ pic.twitter.com/Sl92B2FMVx

Granted I've been using the GIMP (https://t.co/EMX63aJAJV) for almost almost 30 years, but at this point there really no excuse for this from the creative director at Vogue or Liebovitz and her staff.

personally, I'd be humiliated if it took 5 minutes to improve my photos 300 fold with free software.
but I guess I'm not getting paid the big bucks for abject failure on a globally visible scale. https://t.co/VOsCWE099l

I have nothing against critically observing someone’s work, even if they’re an acclaimed photographer like Annie Leibovitz. No one knows everything and everyone has some great work, and some less great. I personally don’t particularly like these photos, but knowing Leibovitz’s style, I’m pretty sure that the lighting and the somewhat gloomy mood were intentional.

However, I am bothered by angry internet warriors who don’t seem to own the power of critical thinking nor they know the photographer’s earlier work. It bothers me that people take their personal opinions as facts and treat them that way. And oh boy, am I bothered and frightened by so much boiling anger. You may like something or not, but you can still stay civilized and have a normal discussion.

I know, I know: I am not a Black person and I can’t understand the struggle they’ve been through. I live in a totally different culture and very far from the US. But this is why I will finish this off with words from a Black photographer who commented on the Simone Biles story here on DIYP:

“Speaking as a photographer myself, I withhold comment on the photoeditorial intent of the photographer, wrt the finished product.

Speaking as a black photographer, however, I wish to categorically disagree with those who express the view that the job should automatically be given to a black photographer. I would feel less than honoured if that were to be the only (or even the main) criterion on which I’m chosen for an assignment such as this. Just saying.”