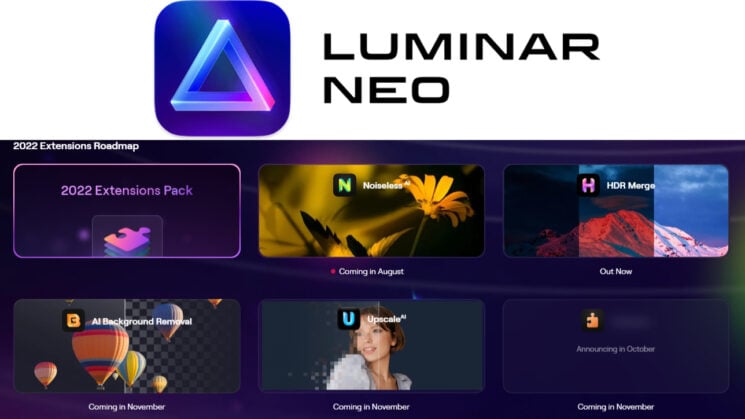 After HDR Merge and Noiseless AI, Skylum has revealed the next two extensions for Luminar Neo. Upscale AI and AI Background Removal are next to come to the extension package. Skylum refers to Luminar Neo as a “platform,” and these extensions are a step towards its growth. So, let’s dive right in and see what this means for you as a photographer and a Skylum’s customer.

“Becoming a platform means that Neo now also hosts Extensions,” Skylum writes in a statement. As we’ve seen, they’ve launched two of them so far, and the two latest ones are just out. We’re in for three more, which should all be released by the end of this year. Skylum also says that Neo is here to stay. This means that you will no longer be confused by its three different editing apps… And that you’ll have it all in one place.

But let’s start with the latest news:  Upscale AI and AI Background Removal. As the name suggests, Upscale AI is an AI-powered tool for enhancing image resolution. Skylum promises stellar results and “a natural way” of upscaling… And we’re yet to test it out. AI Background Removal is another AI-based tool that automatically removes the background behind any subject.

Both new extensions are coming in November, when you’ll be able to add them to your Luminar Neo. However, you can preorder all extensions now in the 2022 Extensions Pack. In that case, you pay €199 (the regular price will be €299). After the extensions planned for 2022 are released, they will become available for individual purchase, starting at $49 each. There are also monthly and yearly subscriptions available, similar to Adobe CC. You can learn more about all plans on Skylum’s website.

Luminar NEO now has automatic portrait background removal. Is it any good?

How is Luminar NEO different from Luminar 4 and Luminar AI?

« Report: Canon orders Viltrox (and possibly others) to stop selling RF mount lenses
No more crash landings: Now your drone can land on a steep slope »