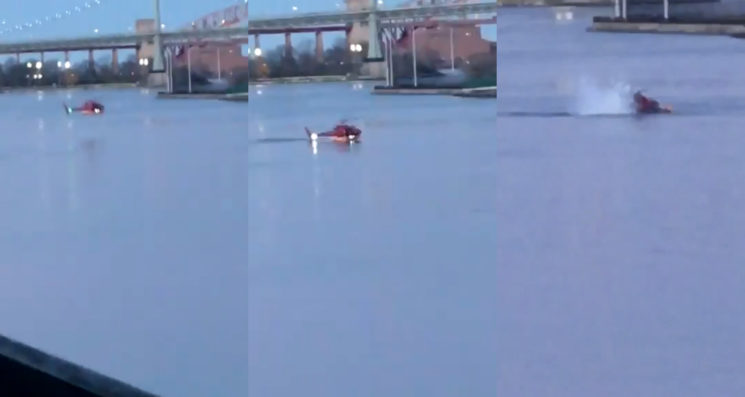 A private helicopter that had been chartered for a private photo session crashed into New York’s East River yesterday. Sadly, only one of its six occupants, the pilot has survived. According to CNN, the pilot said that one of the passenger’s bags may have accidentally hit the emergency fuel shutoff button, causing the helicopter to plummet.

The passengers were on board a Eurocopter AS350 owned by Liberty Helicopters. The crash is the third such incident for Liberty Helicopters in the last 11 years. The National Transportation Safety Board is on site and investigating the crash to determine the cause. The incident was captured and posted to Twitter by somebody in the area.

@cnn @FoxNews just witnessed a helicopter crash into the East River .. hope everyone’s ok. Caught it all on tape! pic.twitter.com/saHOMTLR69

The helicopter came down in the East River near Roosevelt Island at around 7pm local time on Sunday. An audio recording of the mayday call to LaGuardia Airport states that the helicopter was experiencing engine failure. A failure that the pilot now says may be the fault of a passenger’s bag accidentally hitting the emergency fuel shutoff.

A Eurocopter AS350 went down in the East River near Roosevelt Island in #NYC at 7pm today. The helicopter reportedly is inverted in the water. Local authorities will confirm the number of people on board, their names and conditions. The #FAA is investigating.

The pilot was identified by police as 33 year old Richard Vance, who received his current commercial pilot license in September 2011, according to FAA records. He was able to free himself from the helicopter and was rescued. The others were unable to make it out.

One of the most difficult parts of the rescue were that five people were tightly harnessed. People had to be cut out.

CNN reports that Vellejos Blanco was a tourist from Argentina. She was on vacation taking a photographic tour of the city when the incident occurred. She was studying art, design and communications at Cuenca del Plata University in Argentina. The consulate told CNN that her family is working with the NYC medical examiner to bring her body back to Argentina.

Trevor Cadigan was, until recently, an intern at Business Insider, who issued a statement describing him as a smart, talented and ambitious journalist and producer who was well-liked. Officer Brian McDaniel, also killed in the crash, was an officer for Dallas Fire-Rescue.

Liberty Helicopters describes itself as “the largest and most experienced helicopter sightseeing and charter service in New York City” with a fleet of 10 Eurocopter helicopters. But the company has previously had crashes in 2007 and 2009. CNN report that the FAA have documented 16 accidents or incidents involving Liberty Helicopters since 1995 but until Sunday, the only crash with fatalities was in 2009.

Liberty Helicopters has published a statement on their website staying that they are “focused on supporting the families affected by this tragic accident and on fully cooperating with the FAA and NTSB investigations”.

The NTSB are currently investigating the crash.