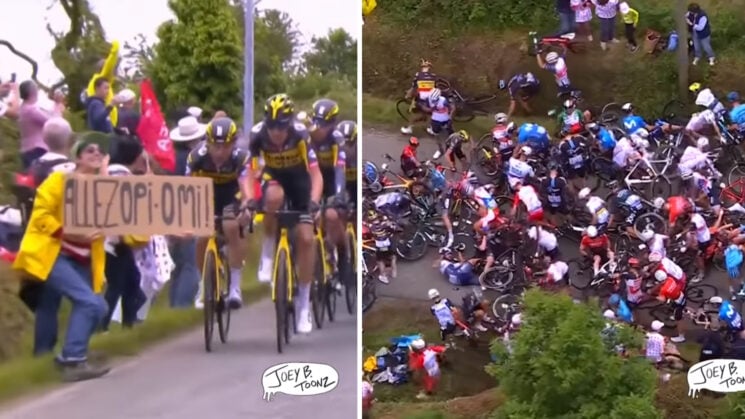 People will do all kinds of stupid s*it just to take an Instagram photo, capture a video, or be on TV. A woman trying to do one of these things recently ruined Tour de France for everyone involved. She and a sign she was holding caused one of the worst crashes in Tour de France’s 118-year-old history. It was all caught on camera, and the woman was even arrested for her stunt.

When I opened my YouTube subscriptions last night, there was a video from Joey B. Toonz about this incident. If you don’t follow him, I suggest you start. If nothing else, make sure to at least check out the video about the Tour de France incident.

Anyway, I wanted to know more about what on Earth happened here. The woman in a yellow jacket was leaning into the road holding a sign that says “grandma and grandpa” in German. It looks like she was posing for a photo or video, or she desperately wanted to be caught on a TV camera. Well, the second thing certainly happened because she ended up in all the news, but for all the wrong reasons.

According to the BBC, the sign the woman was holding caused German rider Tony Martin to lose his balance and fall to the ground. This caused a chain reaction and dozens of other riders fell down as well. The same source notes that this caused two riders to pull out of the Tour completely, and another eight riders were treated for injuries. The race was held up, but it resumed after about five minutes.

The woman was found and taken into custody in Landerneau. She was accused of “involuntarily causing injury and putting the [lives] of others at risk,” Sky News reports. However, the Tour management has dropped the case and no legal action will be taken against the careless woman. The BBC reports that riders stopped the race for around a minute on Tuesday as a sign of a silent protest over safer racing conditions.

“We are withdrawing our complaint,” Tour director Christian Prudhomme told the Reuters news agency. “This story has been blown out of proportion but we wish to remind everyone of the safety rules on the race.”

“If you come to the Tour, you hold your kid, you hold your pet, and don’t cross the road carelessly,” Prudhomme added. “And above all, you respect the riders – they’re the ones worthy of live TV.”