Last year, House of Cards received an Emmy Award in recognition for its cinematography, beating out Breaking Bad, Game of Thrones, and Mad Men.

Making its first appearance in 2013, House of Cards is the show that proved what Netflix is truly capable of, and its production was as different from everything else out there as Netflix was to other studios itself. I started watching this show a bit late, but right from the first scene of the pilot episode, I could point out how much David Fincher this show was running on; to my surprise, the director’s name greeted me twice in the opening credits.

So at the time of at release, this was almost downright unusual. Who could have guessed that a guy like David Fincher would be working as a producer and director for a show by a streaming service? Not only did this project have fincher on board, but it reunited him and Kevin Spacey, who served as a producer for the show as well as the leading role.

Whatever grabbed both of their attention was no big surprise. House of Cards has a story that’s right up Fincher and Spacey’s alley, and it’s exactly the kind of show that fans of Fincher’s past work could get into. Going into the cinematography of the show, I mention David Fincher for a reason: although he was mainly an executive producer, directing only the first two episodes, the tone that he set with them basically became the precedent for how the rest of the series would end up being filmed. The first person hired as the show’s cinematographer was Eigil Bryld, who filmed eleven episodes from the show’s first season.

When you watch anything by Fincher, one thing you’ll realize pretty quickly is that he loves shallow depth of field. Just like the work we see between him and Jeff Cronenweth, Bryld’s cinematography for House of Cards follows what can almost be considered a formal code. When it comes to working with Fincher, he knows exactly how he wants his shots done and there’s not much ad-libbing that gets involved. With House of Cards, the set and lightings of each scene were done in a way so they could continuously keep the ball rolling to the next scene. With the amount of filming required for a full season of television, it was imperative that the crew was quick on its feet. But while the way everything was set up served to keep pacing in check, it also served dually for the overall look of the show, and what Fincher and Bryld wanted to achieve. 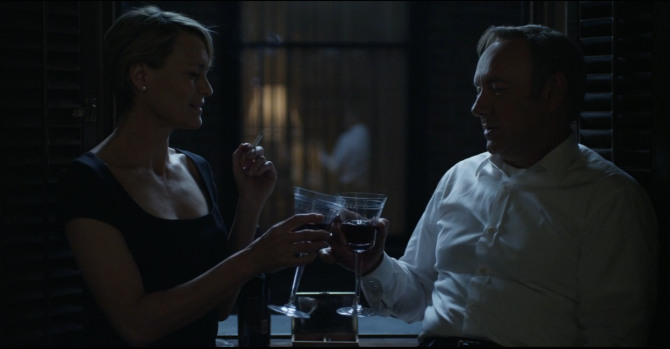 For example, one thing Fincher made clear before filming even began was that there would be nothing of the likes of handheld filming, zooming, or Steadicam shots. Just like Spacey’s character, Frank Underwood, the look of the film needed to be cold, still, and calculating. The audience should be able to feel how kinetic everything is even if the camera’s completely still. The way in which House of Cards was filmed is almost an analogy to the show itself: there’s almost no action at all, and somehow both the show and its cinematography still find a way to keep audiences engaged.

The lighting of the series had to remain natural throughout; at the same time, the lighting had to make us uncomfortable. As always with David Fincher, the lighting in every scene is naturalistic, but at the same time a narration of the story itself. In a story revolving around power, hunger, and pure corruption, it’s not even hard to spot out the messages the lighting of each scene itself gives. One scene can take place in the middle of a sunny day; Frank Underwood sits in a well-lit office, soft light shining towards him through the windows as he speaks to the politician across from him as a friend. The next can take place in an office with the curtains closed, blocking out but a few rays; Frank is now almost a silhouette, the audience seeing him from a lower-eyed view as his true intentions start coming out to the people around him.

Igor Martinovic was the cinematographer for the second season of the show. While Fincher’s exclusively an executive producer for the show at this point, his influence didn’t stop throughout the next thirteen episodes, either. Martinovic, the cinematographer behind the documentary Man on Wire, implemented the same look and feel into his lighting as the last season’s; with tungsten lights serving sufficiently as a source of window sunlight for the show.

What’s important to note about this show is that there’s barely ever a scene of action in it. House of Cards is – at its roots – a script-driven series, and that meant how it looked couldn’t be downplayed at all; it’s not a surprise as to why The Social Network looked as good as it did, either. When action is primarily absent from a story, we need something to keep us engaged, and the cinematographer needs to be ready to provide that action. For House of Cards, the cinematography was dynamic throughout – as the story shifted, the direction of its photography shifted. If business was being made behind closed doors, the contrast was sharp and the lighting was weak. Whatever twists House of Cards’ plot takes in its running, its cinematography is there to tell the story with every scene.