When we came across this video, we were captivated. I’ve always been in awe of ballet dancers. They possess the most amazing hidden strength, machine-like precision, and grace beyond words.

What happens when you ask six incredibly talented ballet dancers to show you their hardest move and film it in slow motion? You gain an even greater appreciation for the skill they possess. This is exactly what Jason Aldag from the Washington Post’s PostTV did and the results are fascinating. 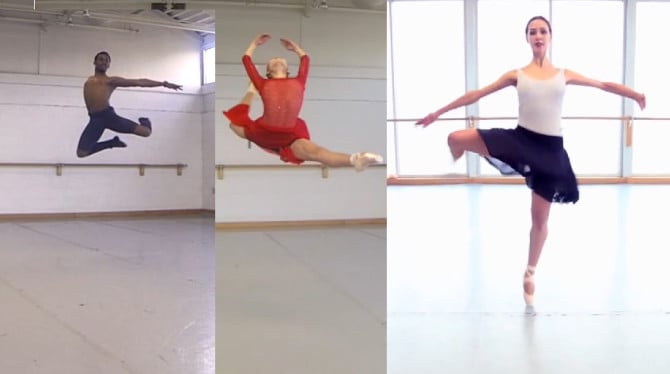 Aldag told me he wanted to show the Washington Post audience “something unexpected.” But, in doing so, he’s shown the world what these dancers can do. He even admitted that he “knew that ballet dancers were athletic but [he] was blown away by what the Washington Ballet crew showed [him] that day.”

Check out these amazing performers in the video after the jump

For me, beyond the dancers, which were graceful and eloquent all on their own, I loved the video in and by itself. Shot in natural light within the dance studio, the multiple camera angles and the slow-motion effect grabbed my attention. Dabbling in video from time to time, I wanted to know how Aldag achieved the effect. He was generous enough to share the process in detail — so much so, that I wanted to just quote for you exactly what he shared:

I brought five cameras to the shoot but used footage from only three: a Mark III w. a 24-105L, a Sony EX1, and a GoPro. The MarkIII was handheld on a camera ribbon with a Rode mic.  The EX1 and Go Pro were on tripods.  The EX1 was shooting in slow motion (S&Q mode) and the GoPro was shooting at 120FPS.  I had a MarkII with a 70-200 2.8 to get details but decided not to use that footage and a second GoPro that worked before we left but decided to die on me as soon as we got there.  I set up the shots and ran around with the Mark III and my colleague Randy Smith rode the cameras on the tripods.

I used the MarkIII and Rode mic to capture the interviews and the moves in real time. I controlled the GoPro footage with the speed ramp in FCPX and used the Optical Flow option to  make the footage a bit smoother. I think it works similar to Twixtor, not 100% on the details though.  I used the EX1 footage as well and slowed it down even more using FCPX and the Optical Flow option. The EX1 doesn’t shoot a fast as the GoPro so having the 120FPS footage to work with was great.

That’s got me thinking of whether I can pull off some slow-motion capture with what I have at my disposal and how I can implement some slow-motion footage into the next video I work on. Might be time to break out the GoPro to have some fun. Leaves me wondering, though, what would be good to capture in ultra-slow-mo. What would you like to slow down and capture?

« PSA: Always Remeber To Sandbag Your C Stand
The Cinematography of House of Cards »