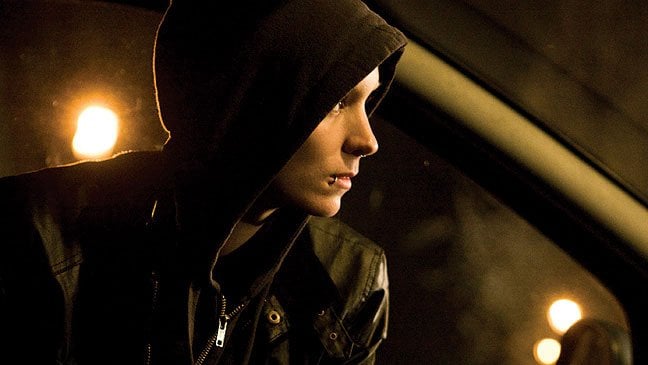 Out of everything I’ve learned when it comes to photography, what strengthened my work the most was watching movies. Much of how I shoot my pictures today came from observing and comparing different directors and cinematographers. It’s why I started writing about film at all here in the first place – We’re not No Film School, but it’s still never a bad thing to learn from a good looking movie. Most of us are familiar with the concepts covering film direction and cinematography in general – but considering this is at heart a “DIY” blog, I thought it’d be cool to give a visual presentation on just how much both factor into the end result of a film. So let’s compare two relatively recent films that adapt the same source material: Stieg Larsson’s The Girl with the Dragon Tattoo.

For those that don’t know, The Girl with the Dragon Tattoo is a Swedish novel released in 2005 – the Swedish film adaptation, directed by Niels Arden Oplev, was released in 2009 and became one of the country’s highest-budgeted movies to date. Two years later in 2011, the story was introduced to American cinemas in an adaptation helmed by director David Fincher (Fight Club, The Social Network, Gone Girl).

These two films are absolutely perfect for the comparisons about to be made; the two respective teams working on each one could not creatively be further apart from each other. With Fincher utilizing only the original novel as his source material and taking as little influence from the Swedish film as possible, the end result is two separate interpretations of one central story. It’s up to the audience to decide how similar the narratives ultimately ended up being, but there’s absolutely no doubt of the fact that they were polarized in how each was filmed.

So what are the factors behind it?

Right off the bat, there’s the fact that each adaptation was filmed in a different country – the interesting part here is that one of those countries is literally the setting of the story. That’s where the first difference sets in: the original film is shot with a sense of familiarity, while Fincher’s approaches the location from a foreign point of view. Check out how much more emphasis is put on the weather in the shot below from the American adaptation; the same focus isn’t captured in the Swedish version because – well – it’s normal for them.

This particular shot gives an example of the next and most obvious factor coming to play here: the differences they have in style. Compare how static the camera work is in Fincher’s adaptation in relation to the shakiness of the shot in the Oplev’s adaptation. If you’re familiar with Fincher’s films at all, you’ll probably recognize that happening often. The camera is always controlled in a way where it’s detached from the world of the film itself, and it’s part of what gives the director’s films the uneasiness they evoke (see: Gone Girl). The “handycam” shakiness that gives many movies an almost documentary-like feel is gone from any of Fincher’s work, and for a story like that of The Girl with the Dragon Tattoo, that factor becomes a powerful catalyst for the emotions the film attempts to evoke.

“I don’t know how much movies should entertain. I’m interested in movies that scar.”

That’s just David Fincher’s style. If there’s a film out there with camerawork by Jeff Cronenweth, cool blue and yellow color tones, and a Trent Reznor soundtrack, chances are it’s one of his films. He takes his work in a direction completely his own, and at this point he’s a well-known auteur because of it.

The success The Girl with the Dragon Tattoo gathered brought the Swedish film industry into the national spotlight, and eventually the film’s production company – Yellow Bird – began working with Columbia Pictures on the American adaptation. Here’s where we have to look at where the filmmakers on both sides stand in terms of how they work. There’s a slight amount of unfairness in comparing the work of Niels Arden Oplev to that of David Fincher, because the latter is currently one of the most influential directors out there on the playing field; we’re talking about the guy that brought us Se7en.

While the Swedish adaptation was beautifully shot itself, it wasn’t shot with the restrictions we’d find in the American version (such as Fincher’s distinct style). The original movie was done as a theatrical release, and eventually released as an extended cut along with the rest of the eventual trilogy (the Millenium series) it turned into. The full thing was eventually split up and aired as a mini-series. One thing to note here about the trilogy is that all three movies were released by the end of 2009. They were filmed fast, and on a $7 million budget; compare that to the fact that Fincher’s version was an $80 million production, and that Fincher’s notorious for reshooting scenes as many times as he thinks he has to. Where the Swedish series was shot with less emphasis on the aesthetics and more on the narrative, Fincher kept his signature style in line as he shot his adaptation.

Typically, whenever we watch movies, most of us don’t notice details like this; we don’t notice a specific color palette, a specific style of camerawork, or the angles in which a certain scene is shot. And that’s a good thing – it means the movie succeeded at being filmed with consistency, and it means that we’re directly engaged with the world in which its story is set. The world of the Swedish Girl with the Dragon Tattoo gives off a completely different vibe than the world of the American adaption’s – and both worked off of the same source material. One thing I love about film directing and cinematography in general is the fact that it helps me remember just how many different ways there are for me to take a picture of something. It helps me experiment with my work, and it helps me get stronger at it – hopefully, these two movies help fuel some creative inspiration for you guys as well.

I tried keeping this post as spoiler-free as possible. If you want to see the full set uploaded by Imgur user Kondrat1983, check it out here (a few are slightly NSFW).