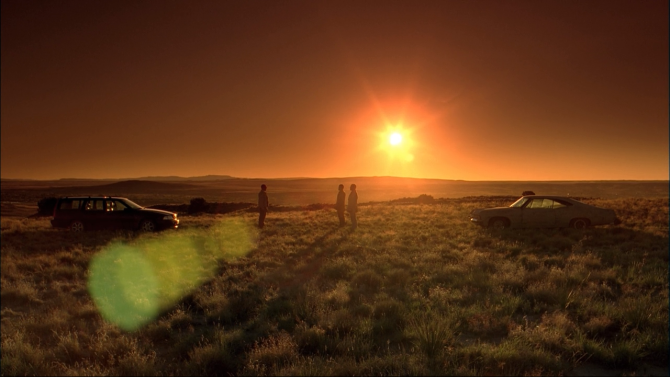 When AMC called filmmaker Michael Slovis offering him a job as a cinematographer for a show being filmed in New Mexico, he was quick to dismiss it. He’d been traveling too much, and there was no way New Mexico was going to be his first option for leaving town. Then his wife told him to call them back, and he listened. A writer named Vince Gilligan sent Mr. Slovis the pilot episode of a new project he started called Breaking Bad. It didn’t even take until the end of the first scene for Michael to forget about any complaints he had over traveling.

He said to his wife, “Oh my god, this is filmmaking.”

After calling AMC and talking with Vince about how the show should be shot, Vince ended their first conversation by telling him he trusts him. They may not have known each other well at all for the writer to make such a bold statement, but he saw something in Michael Slovis already. After working on “737”, the second season’s opening episode and his first credit for the show, he was contacted by Sony Pictures; the company was completely baffled at how he filmed it and wanted to know what the hell was going on. After all, Breaking Bad hadn’t ever opened with a black-and-white shot before. The show hadn’t been filmed with images with such strong contrast and dark tones up to that point, and it was something Sony wasn’t used to seeing. Michael assumed it was time for him to pack and head back to New York already, but both Vince Giligan and AMC contacted him afterwards; they told him not to change a single thing. When it comes to filming, Michael Slovis is a man known for his integrity, and he doesn’t hide it at all.

When I spoke to Vince Gilligan I said, “You have a spectacular show, maybe the best thing I’ve ever seen. But it deserves a graphic look that is often not allowable on television.” 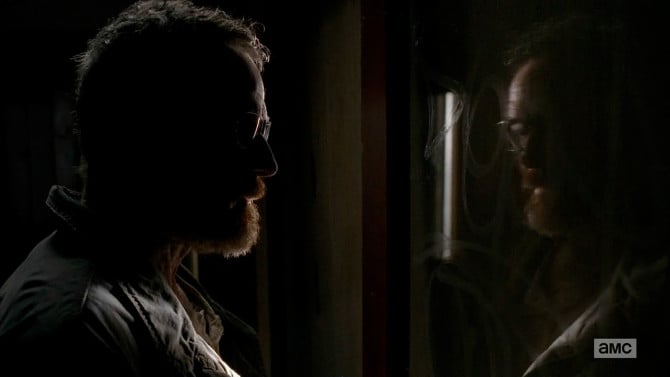 It’s safe to say that integrity, for Michael, is something he values greatly in others. When talking about Vince Gilligan, he speaks mostly of how much empowerment the writer gives him as a cinematographer. Vince listens to the ideas that his crew brings up, and at the same time he doesn’t agree with everyone on everything. He never lets Michael refer to Breaking Bad as “your movie” when Michael speaks to him; he corrects the cinematographer each time by interrupting and saying, “our movie.” Michael Slovis continued to work for the show up to the end of its running, and turned down many jobs that were offered to him in between – a feature film version of Doctor Who was included in that list. Breaking Bad was his dream job, and he ended up becoming the most prevalent member on the set, possibly second only to Bryan Cranston. 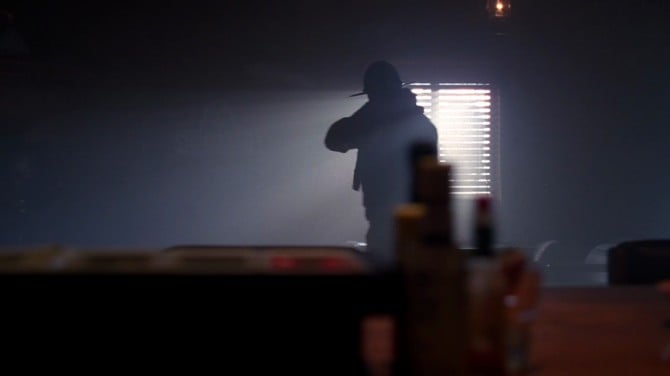 AMC stands for “American Movie Classics”; the television network requires every one of their original shows to be shot with film to uphold the spirit of the company name. Michael Slovis may not have had a say in the matter, but he didn’t even think about questioning that choice. Back when he first started filming with AMC, they weren’t where they are now at all; Mad Men was the only original show in production at the time, and there was a degree of respect present for what AMC kept its aims toward. But the biggest thing Michael Slovis kept in mind when it came to shooting with film was the price he knew that it would come with. Film is expensive, and to this cinematographer, that meant nothing could be deleted once it’s filmed. That meant that every shot counted, and Michael made certain that the crew would approach every scene with the utmost care from the beginning. With a daily budget of only 11,000 feet of film, that meant making every frame of it count.

“[We] were allotted 11,000 feet of film a day. If you went over that, somebody came from the office and spoke to you. Which meant that you had to think through, with intent, what it was that you wanted to shoot for the day. There was nothing arbitrary about Breaking Bad. It’s formal.” – Michael Slovakis, Forbes

One of the luckiest things the show had going for it was that it began filming around when widescreen TVs started becoming the norm for American households. That made a world of a difference for the cinematographer, who now had the luxury of being able to incorporate wide shots where they would count, instead of forcing back-to-back close-ups. 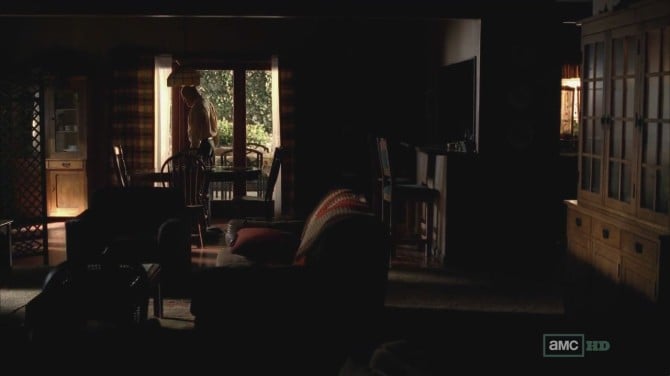 There’s a scene in the final episode of the first half of Season 5, “Gliding Over All”. Walter’s just ordered the killings of ten prisoners, and the order is being executed in one of the most violent scenes of the series; at the same time, spliced in are shots of Walter carrying his daughter, walking in the comfort of his house. The daylight is at its brightest, but we can only tell that from the few rays coming from the window. The rest of the room is black.

Michael Slovis’ approach to the show was never about being realistic. His plan was always to give the story the style it demanded. As the styles changed, so did the ways in how the show was shot. If Walter’s house was always bright at that time of day, for this scene it wasn’t, because that’s what the story’s asking for. 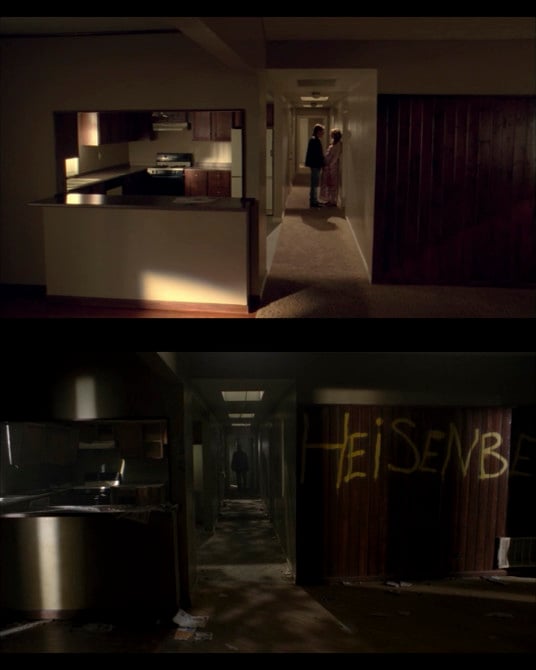 The first and last time Walter steps inside his house.

One of the signature styles that comes up often in Breaking Bad is the wide shot. Michael Slovis wanted to approach this show like it was filmed from the 60’s to the 70’s. To him, Breaking Bad is a modern spaghetti western, and that meant using Kodak Blacks and lots of wide shots. 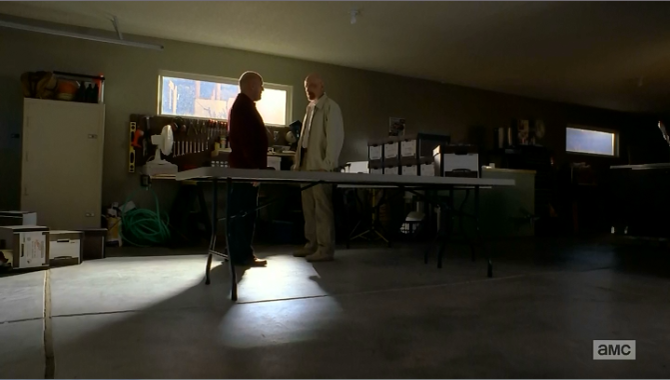 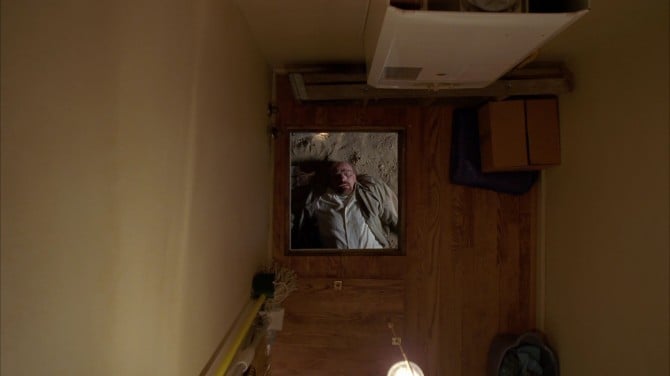 Wide shots were also used to capture even the most claustrophobic moments of the show, like the ending shot of “Crawl Space”, shown above. 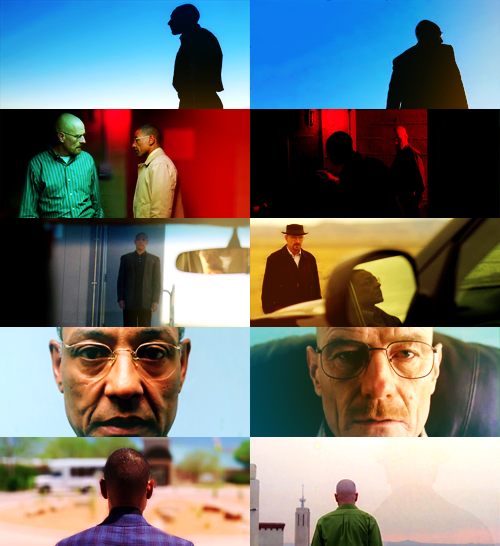 The symbolism is deliberate, and Michael Slovis never hides it. Both men in the collage above, once kings of their drug pins, were shot in a similar manner to highlight the traits they shared. 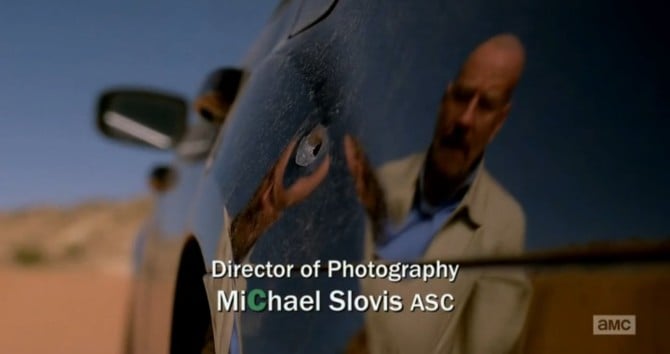 The best part about the symbolism in the shot here is that Michael’s name comes right over it, letting us all know who was responsible for it. 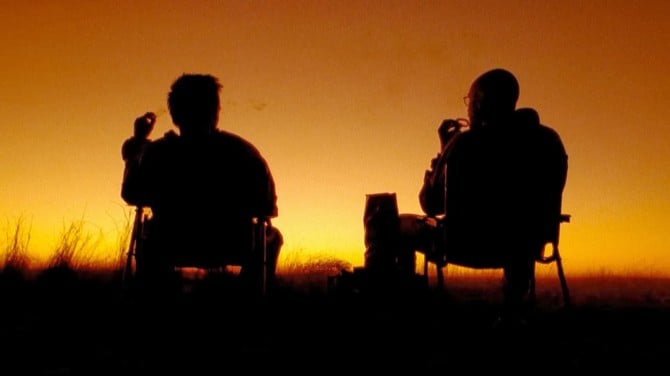 Breaking Bad is now fully complete, and it’s marked its presence as a staple in pop culture for years to come. By the end of its filming, there were two people that appeared most on the set: Bryan Cranston himself, and Michael Slovis. The impact Breaking Bad has had on television since its inception wouldn’t have been possible without the input of its cinematographer, and it’s left an impact back on him itself. To this day, Michael Slovis considers the show his career’s most important work. 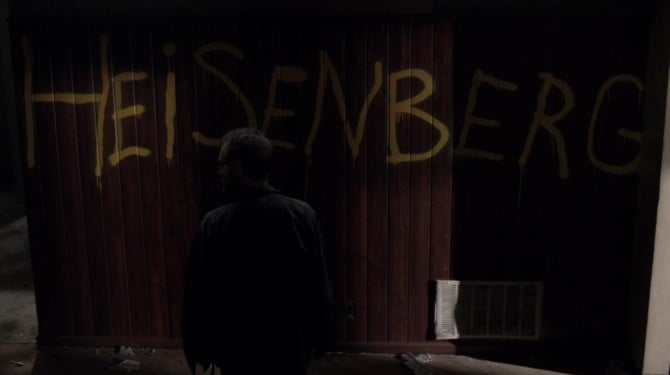 I’ll end this post with my favorite shot of the series, from one of its last few episodes. Michael Slovis and Rian Johnson (the director) installed a contraption that would make the ground break as Walter’s face landed into it. The shot was done on purpose to make “cracks in the sand” appear as we witness the fall of Heisenberg. The cracks, and even the position Walt in which Walt lies, were a deliberate reference to the line of a poem about the fall of kings; the title of the poem, “Ozymandias”, is the name of the episode itself. 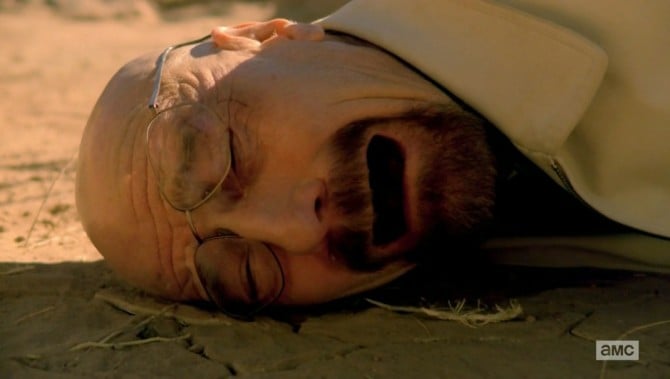 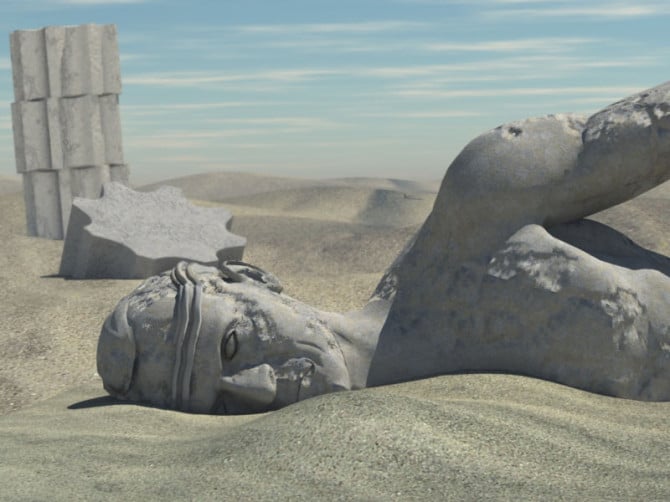 A portrayal of King Ramses II, in the context of the original poem.