In 2010, Christopher Nolan released a film he’d been working on for over half a decade, and the premise of it was something not too long ago thought un-filmable. Titled Inception, the story was held off as a complete secret, and when teaser trailers did release, nobody really understood what they just saw. Wally Pfister, the cinematographer behind the movie, arranged an immediate meeting with Chris after reading the script he was sent, to try and figure out “what the f*ck was going on.”

Wally Pfister has been a collaborator with Christopher Nolan for a long time now, working as a cinematographer for every film of his since 2000’s Memento. Both him and Chris share two significant things in common: their love for naturalism, and their love for shooting in film. And if there’s anyone keeping the medium of film alive in the digitally dominated industry of Hollywood today, it’s these two guys. Their last venture together with The Dark Knight Rises grossed over $1 Billion, and that was accomplished without the film ever being released in 3D; when I say they love naturalism, I mean they love naturalism.

By now, most of us are familiar with the film; it became one of the biggest original stories to top box offices worldwide within the past few years, and it was something new. And with how practical both Chris and Wally are with the way they want things shot, Inception was cinematography at its finest.

The story of Inception was originally written by the director himself. That meant that he knew exactly what he wanted; with Wally Pfister on board as always, the production of Inception had an advantage in that Chris and Wally were the best guys for the job because they’re the originators. Like the title of the film itself implies, Chris Nolan and Wally Pfister planted their own ideas in its making throughout.

With the premise revolving around a machine that allows us to enter our dreams and be able to create, the possibilities the story allowed were endless, and the set pieces that the end result required demanded a hell of a lot of work. With how potentially confusing the plot of the film could turn out because of the constant shifts it took between settings, Wally Pfister had to make sure the cinematography of the film served as a guiding point for the audiences. If the scene cuts from one setting to another, the viewer should be able to tell instantly. In Inception, each setting in the main act of the film is a different dream, and that’s where Chris and Wally’s practical approach in filming counted; the dream had to feel real. That meant if something could be pulled off without CGI, then it was for damn sure pulled off without CGI. With realism being one significant factor in the cinematography of the dream, the next was color. What ultimately served as the most successful guiding point for audiences to know what level of the dream they were in was the fact that each had its own distinct color palette. And we can learn how Wally’s cinematography played its role by studying the levels of the dream themselves.

Waiting for a Train / Layer 1

Inception was filmed in a number of different locations – Morroco, Paris, Los Angeles, and Japan, to name a few. Wherever he went, he took photos of what he saw. For each dream sequence, he would compile work from the shots he got, and manipulate them in Photoshop to find out what kind of look would work best for each setting. For the first level that Cobb and his crew enter, shooting took place in Los Angeles. This was the layer in which the van chase occurs; it’s also known for causing heart attacks in theaters worldwide when a freight train in the middle of the street bangs against Cobb’s cat (If there’s one thing I regret about watching this in IMAX, it’s that sound and how deafening it was coming through the theater’s steroid-pumped speakers).

This was the first layer of the dream in which the film’s main heist takes place, and it started everything off with a rush of adrenaline. The color palette Wally Pfister went with here was a combination of gun-metal grey and a tint of metallic blue. The streets were packed, and the subconscious of the man who’s mind is being infiltrated were violent. As the film progresses, more layers are created; and as we fall into more of them, the preceding layers still remain crucial to the plot. When we’re taken back to a gun-metal city soaked in heavy rain, we know exactly what layer we’re at.

Even dreams have product placement.

In terms of cinematography, there is one pivotal sequence in the second layer of the dream, and it’s one of the most memorable scenes of any film in the past decade. When shooting zero-gravity shots, it’s typically normal to use different camera angles, apply fast-cutting takes, and give an illusion weightlessness through clever camera movement; at other times, harnesses come into play, and most of the shots get post-processed through computer animation. But with how relentless Chris Nolan is in practicality, as we’ve already noted, the zero-gravity fight sequence was approached with a different method – building a rotating 360-degree hotel hallway.

The approach Wally took in how he wanted to shoot it gave the sequence an even more surreal element; the camera was going to move as normal. The floor of the rotating hallway was adjusted so that the camera was fixed on it; it would capture the shots needed by tracking back and forth on one floor of the hallway. While gravity became a complete joke as we saw two men falling up, left, right, back left, and back up as the hallway made its rotations, the camera was fixed on the ground. The lighting of the hallway gave the layer its warm-orange tungsten palette. 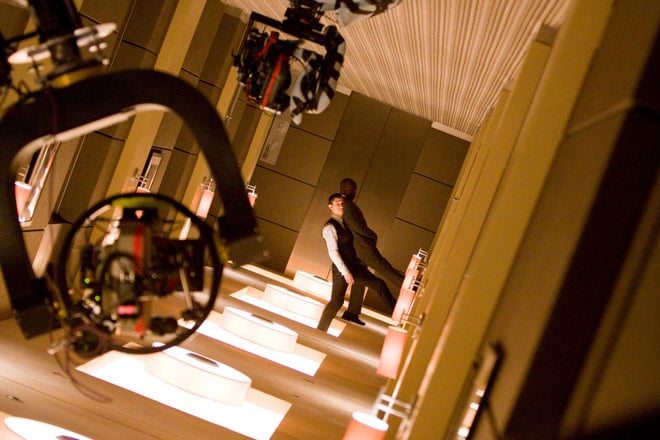 Both Christopher Nolan and Wally Pfister are avid James Bond fans. Much of how Christopher Nolan approached the Dark Knight trilogy gained its inspiration from the Bond series itself. For the third layer of the dream, the color palette Wally Pfister chose came through inspiration from a Bond film, as well. Considering the setting here took place in alpine mountain ranges and a fortress in the middle of an Arctic desert, the color palette for the sequence was monochromatic – vividly white and gray. The snow fortress itself was a miniature designed by the artists working on the film; the model was what was shown blowing up and crumbling at the climax of the film.

A key moment in the film takes place here when Robert Fischer opens the safe and finds his father lying in bed – this is where the inception itself takes place. The tone changes as the setting becomes surreal, but the color palette remains unchanged.

Throughout the entirety of Inception, only 500 visual effects shots are used; Limbo is where a significant amount of them are used. This may have been the most difficult scene out of the film for Christopher Nolan and Wally Pfister to approach, because it was the one sequence that was constantly developing during production. While Chris was in Morocco, he discovered unpaved white buildings that ended up serving as part of the layer’s environment. Limbo was where Cobb and his wife spent fifty years together, building things they could never bring to fruition in reality. As the death of Mal began to decay Cobb’s state of mind, the limbo served as a visualization for the agony and burden that he held in his subconscious. Like avalanches, the buildings off the coast of the island were crumbling; the streets were abandoned and desolate. Wally’s photography came into play here, as well – much of the ghost-like imagery seen in Cobb’s limbo was inspired by the photos the cinematographer took of incomplete housing projects in Morocco.

The colors Wally used in this film were earth-like and natural; they were warm, metallic, and cool. With no bright hues present in the palette at all, the tones were organic. In Limbo, it all came together. With a world built on for fifty years by two young lovers and then abandoned, the coloring couldn’t be simple; there’s a clash between earth-like tones, and the end result is a city that looks like it could have grown from the ground. The buildings decay like they were living things.

But Cobb wasn’t the only one who went into Limbo. With Saito reaching a cathartic state and dying in the dream, while sedated in reality, limbo held his world as well.

The last sequence of the dream is the one it started off with, in a setting built for Saito. Where in the beginning of the film he was young and energetic, here he was old and demented. What Wally Pfister does here is essentially a summary of what cinematography is all about. Through using nothing but lighting, he wakes one set, used in both the film’s opening and closing dream sequences, and changes the story it tells the audience. The story starts off with a room; the lights artifical, and the highlights and shadows powerful. The walls are colorful, and the reflections on the table are radiant. The story concludes with the same room; no windows are present at all, but the glow on each face makes it seem like rays of sunlight are still shining through. the lighting is softer, the walls are bleaker, and the two men – who started off opposite each other in the best suits they could dream up – were now facing each other with frailty, one desperate to save the other. In reality, they were so young, but what they did to their minds left them older than men are capable of becoming. They were ready to get out and find reality again.

Inception was shot by Christopher Nolan and Wally Pfister on anamorphic 35mm film, with significant sequences filmed in 65mm. Aerial shots were taken with VistaVision. The sequences you see shot in slow-motion are done at 1000 frames-per-second on a Super-Sonics 35mm camera.

Oblivion: The Cinematography of Claudio Miranda