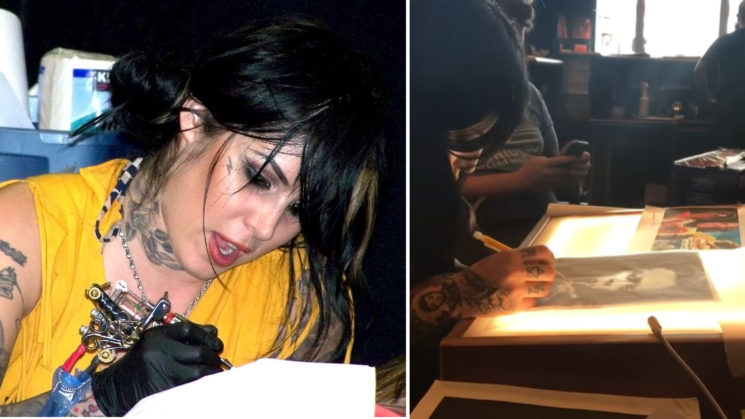 We’ve seen different kinds of copyright infringement lawsuits, and here’s a very unusual one. Photographer Jeff Sedlik has filed a lawsuit against famous tattoo artist Kat von D who used his photo of Miles Davis for a tattoo. The photographer seeks $150,000 in statutory damages plus any profits earned made by depicting the tattoo and removing any “derivative works” she could have made from it.

Kat von D (Katherine Von Drachenberg) became famous after she was a star of the TLC reality TV series LA Ink, running between 2007 and 2011. In March 2017, she used Jeff Sedlik’s photo of Miles Davis as a reference and tattooed it on her client’s arm. She shared it multiple times with her 7.4 million followers on Instagram, as well as on her Facebook page. You can also see the photo in this short clip on YouTube.

Shhhhhhhh! Don't tell anyone but this is actually Kat Von D's 1st time doing a portrait of the incomparable #MilesDavis. So far go good, huh??What musician would you get?

According to the lawsuit, Sedlik alleges that her Instagram photo “depicts the ‘final product’ of defendant Kat Von D’s unauthorized and unlicensed reproduction and derivate work of the Iconic Miles Davis Portrait in the form of a tattoo.” He also claims that an HVT Instagram Post from 15 April 2017 “depicts a nearly exact duplication of the Iconic Miles Davis Portrait as reproduced by defendant Kat Von D.”

Sedlik took this photo of Miles Davis at his beach house in Malibu, California, in 1989. The portrait has been sold with a non-exclusive license to reproduce, distribute and display ever since it was created. The first time it was published was shortly after its creation: it became a part of a cover story in JAZZIZ magazine around August 1989.

This is the only photo Sedlik sells on his Saatchi Art account, where he adds a bit of a backstory:

“I prepared for this portrait session over a period of years, working through hundreds of concepts, creating dozens of sketches. Miles selected a number of my sketches, but this concept was his favorite. To make this photograph, I created a 20’x20′ tent of black cloth on the patio behind his home. The image was made at noon, in bright sun, beneath a large sailcloth. Miles treated me with respect, and I photographed him on many occasions in his later years.”

In addition to the backstory, Sedlik requires that his photos are not copied or used without contacting him for a license first, nor new artworks should be made based on his photo. So, he decided to sue when he saw that Kat von D did make art based on his photograph.

According to Billboard, the photographer wants Kat von D and her business High Voltage Tattoo to remove any content referencing his image from all print, web, and social media platforms. He also seeks statutory damages of $150,000 per work depicting the tattoo, including “derivative works” such as advertising, marketing, and promotional materials. But that’s not all. Sedlik also requires any profits Kat von D and her studio made from using the image, as well as any losses Sedlik had as a consequence of that use. There are also “any other monetary advantage gained; all other damages available under copyright law; attorneys’ fees and costs of the suit; and pre- and post-judgment interest.”

However, Sedlik claims that he didn’t file a lawsuit just like that. In a statement he gave to Billboard, he said that he “reached out to Kat von D ‘artist to artist’ (through her representatives) seeking an amicable resolution of the matter.” However, he claims that she “chose to ignore [his] good faith effort to avoid litigation.”

Honestly, I have no idea how this could turn out. I don’t know how the law works with this kind of derivative work, I never even thought about it. I believe tattoos based on photos are considered to be derivative work. But then again, Kat von D didn’t earn money from the photo itself, but from drawing it on someone’s skin. I must admit that I’m confused and very curious to see how this ends. If you have knowledge and experience on this particular topic, I’d love to hear from you. And even if you don’t, I’d love to hear what you think – who will win this one?

You can read the lawsuit here.

« Apparently, yes, you can you shoot portraits with a smashed up rear lens element
Use these ten tricks to save money when buying camera gear »