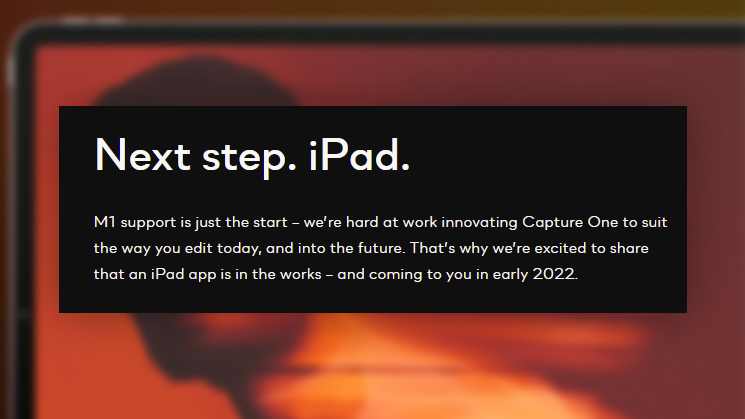 Capture One recently announced an update that afforded the app with native support for Apple M1 desktops and MacBooks. And now that the M1-based iPads are here, Capture One has also announced via Instagram that they’ll be releasing a version for the iPad next year.

The Instagram post explains that the app is currently in development and that the company is “hard at work” to bring it to us. It’s expected to come “by early 2022” but beyond that, there isn’t anything specific just yet. I expect, however, this will only be for M1 based iPads, and not those that utilise the Apple A chips.tt

A post shared by Capture One | Editing Software (@captureonepro)

As well as the Instagram post, the trial download page for the latest update also mentions that an iPad version of the app is on the way, although it doesn’t provide any extra information. It does, however, offer you a link to sign up for the latest Capture One news so that you can be alerted once more information is released or the app actually becomes available.

Whether we’ll see a fully finished and polished app from day one, or an app with the basic features that’ll grow over time (as we saw when Adobe initially released Photoshop on the iPad) is unknown, but we’ll keep you posted as we find out more.

We Knew It Was Coming: Drone Has A Near Miss With An Airbus A320 Airplane