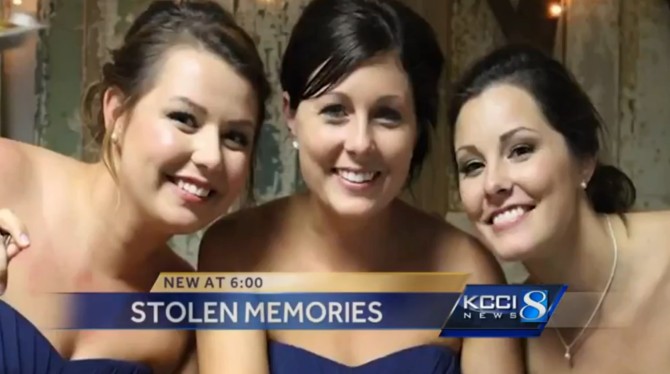 Backup, backup, backup – these are three of the best pieces of advice any photographer will ever receive.

Unfortunately for Iowa photographer Haleigh Wehr, her backup process was either lacking on non-existent, and the result is a devastating loss after her car was broken into on Wednesday night.

Items valued at thousands of dollars were stolen, according to KCCI, including two laptops and Wehr’s wallet, but the most painful loss does not carry a price tag – six memory cards containing over 20 photo shoots.

Thousands of photos of family portraits, weddings and newborn photos were gone, and Wehr had to contact each client explaining that they might never receive their photos.

“My stomach dropped, and I couldn’t believe it. I was just like, this cannot be happening,” said Brooke Wegner, one of the photographed brides. “If we don’t find those pictures, I won’t get them back, and I have nothing.”

“We have lots of family pictures, and I have a great grandma alive. We won’t get those back unless someone comes forward with it,” she added.

Luckily for Wehr her clients have been understanding in an time when many would be angry and seek legal action.

“There’s nothing I can do to make it better for people,” said the sad photographer, and while hindsight is 20/20 this unfortunate situation could have been easily avoided.

According to the video below, Wehr’s lost photo shoots were stored on the stolen memory cards, not on the laptops, which makes one wonder why she carried around sole copies of so many photo shoots. Giving her the benefit of the doubt that the laptops contained backups as well, and that the equipment was left in the car overnight due to forgetfulness rather than laziness, it is still obvious that a solid backup process including an offline backup would have prevented, or at the very least minimized, the lost moments (and probably future clients as well).

I’m not pointing out the weaknesses in Wehr’s backup plan to kick her while she’s down, and I ask that you don’t either, but rather as a reminder to us all to implement and/or perfect our own backups.

A similar incident took place in Vancouver last year when 2000 photos were stolen while a photographer was working at a wedding. In another case, this February a thief returned a stolen memory card once he discovered that it contained photos of a deceased infant.

If you have any information about the incident, please contact the Carroll Police Department and you could receive a $5,000 reward if your information leads to an arrest. If you’re the thief, you should probably just send back the memory cards as I’m not sure you’re eligible to collect the reward.

Wedding Photographer Loses Over 2000 Photos After Car Was Broken Into – What Would You Do?

« DIY: Awesome Iris Lamp Has Aperture That Opens & Closes As Light Is Turned On Or Off
The Creative Photography Of Modernist Cuisine Is So Popular, It’s Now A Travelling Art Exhibit »