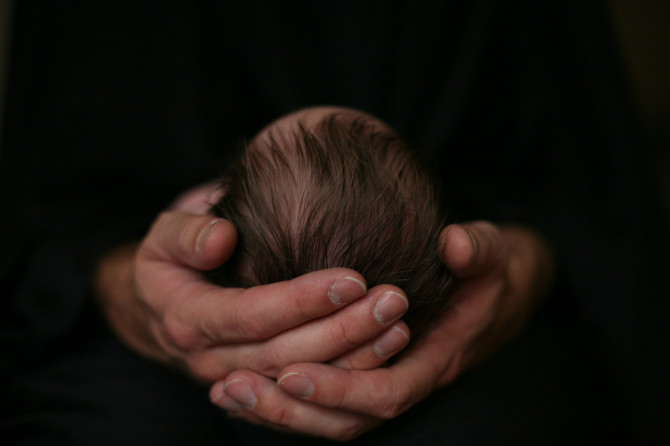 In early Februray, North Carolina photographer, Faith Massey, heartfeltly photographed the first and last moments of a local couple’s infant, who sadly passed just moments after his birth. The photoshoot was part of the Now I Lay Me Down To Sleep project, which offers grieving parents a photoshoot with their sick newborns. Outside of a couple cell phone photos snapped by the baby’s parents, Massey’s images were the only photos documenting the last precious moments of the child’s life. Imagine, then, the pain experienced by the parents and Massey when the photographer’s camera equipment was stolen from her car along with the memory card that housed the only copies of the newborn while the car was parked in Massey’s own driveway.

When a local news affiliate learned of the tragic events, they met with Massey, allowing her to share her story in hopes the thief would see the consequences of their actions and do the right thing. You can watch that news clip, here:

Today, Massey posted on her Facebook page that the memory card on containing the photos had been miraculously returned. She says the card was mailed to the news station in an envelope with no return address. It has been confirmed that the lost images were still on the card. While Massey and, pretty much everyone who has been following the story, is ecstatic to at least have the images returned, however, none of the photographers other equipment has been recovered.

In the comments of her post, Massey noted that her insurance company has denied a claim to replace the equipment. Massey explained to her Facebook following that she parked her car in her garage and left her gear bag in the car while she ran inside her house to quickly do a few tasks. She noticed the bag was missing as soon as she returned. Her insurance company told her they couldn’t replace the equipment since the car was not physically broken into. 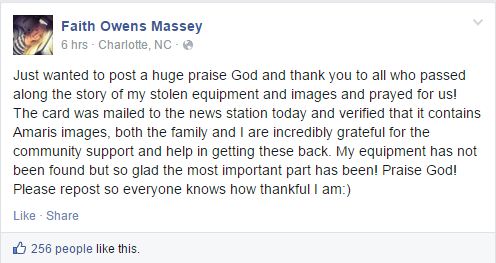 The lost equipment includes a Cannon 6D, 50mm 1.2 USM lens, 100mm 2.8 macro, and 85mm 1.8 USM lens, in addition to various other pieces of miscellaneous gear that was inside the camera bag. At the time of writing, Massey could not be reached for further contact.

[ via WBTV | Lead Photo by Jlhopgood ]

How would you feel about appearing in a selfie with a deceased loved-one?