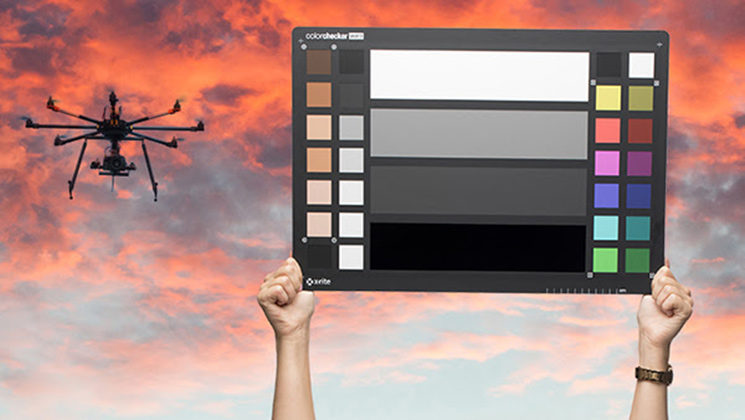 The X-Rite ColorChecker family is starting to get a little confusing, but there are essentially five products now. Two for stills photographers and three for filmmakers.

Each of the products for the two different users offers the same functionality in each of the different sizes. Just some are more convenient for some shoots than others.

The two Passport products, as the name suggests, are about the same size as your standard passport. In fact, whenever DIYP visits the shows, I usually have both ColorChecker Passports tucked into the Passport wallet of the Think Tank Credential Holder. They’re very handy when you’re working quick on the move, out on location, and you can easily zoom in or move closer to fill the frame with a small target.

The next size up is the regular version, and you can read our full review of the ColorChecker Video right here. I’ve found that this size works best in a studio environment, where you might need to point multiple cameras at it that are already locked off with fixed focal lengths. Having it a bit bigger lets you cover those wide shots and close-ups in the studio with ease.

Obviously, though, when flying a drone, the smaller targets may present something of a risk to the person holding them. The wide lenses on most drones mean that it has to get quite close, because you need to have the targets fairly sizeable in the frame to be able to make use of them in the software afterwards. This is where the ColorChecker Video XL steps in, to let you fill more of the frame at a safe distance.

It’s a great idea and will be a valuable tool for drone filmmakers, especially if they want to match footage with cameras on the ground.

The X-Rite ColorChecker VideoXL comes either on its own, with a simple carry sleeve or with a more robust and configurable carrying case.

I can’t find any US prices yet, but the UK prices are…

For US customers, keep an eye out in the usual places. It should be coming soon.

« Everything you need to know about working with Photoshop’s powerful Smart Objects
DJI Mavic Pro 2 vs. Phantom 4 Pro: an in-depth comparison »