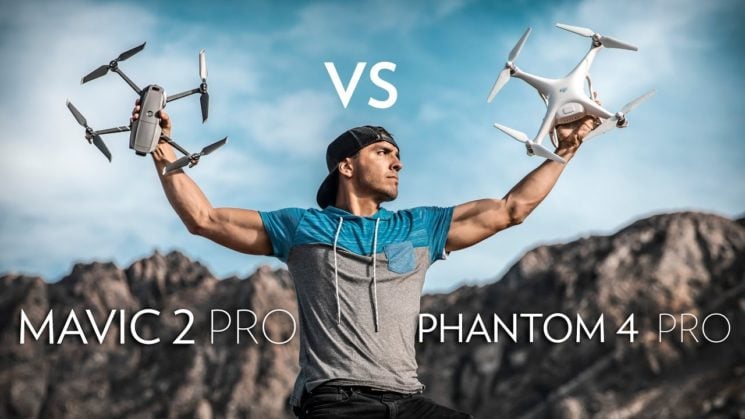 If you’re in a market for a drone, there are many options to choose from. DJI launched Phantom 4 back in May this year, and two versions of Mavic 2 were launched a few weeks ago. In this video, Parker Walbeck gives you an in-depth comparison of the DJI Mavic Pro 2 and the Phantom 4 Pro. So in case you’re wondering which one to buy, or if you should upgrade from a drone you already own: this video is for you.

As Parker explains, he compared the Mavic 2 Pro to the Phantom 4 Pro because there aren’t so many differences between the drones of the Mavic series. He chose Mavic Pro 2 because it has a much larger sensor than the zoom version. So, let’s get to the comparison.

Both drones are similar in terms of price. The Mavic 2 Pro costs $1,449 and the Phantom 4 Pro is $1,499. However, Parker’s Phantom has a built-in screen, which makes it $300 more expensive than the Mavic.

Mavic weighs 2 pounds whereas the Phantom weighs 3 pounds. Additionally, the Mavic can be folded, which makes way more portable and travel-friendly. So, a point for Mavic again.

In parker’s test, it took him 1 minute and 13 seconds to set up the Mavic and start flying, whereas Phantom took 1 minute and 10 seconds. This isn’t much of a difference, plus it will differ for everyone. Objectively speaking, both drones are quick to set up and get in the air.

The Phantom gives you 24mm and the Mavic is slightly tighter at 28mm. Additionally, Mavic has a setting 4K HQ which gives you an even tighter focal length of 40mm. So, there’s no winner here. The drones are simply different and it all depends on what you need and prefer.

The Phantom can fly 30 minutes per battery, and Mavic offers you a 31-minute flight. So, there’s a very slight advantage for the Mavic.

Both drones have the maximum speed of 45mph, so there’s no winner here.

The Mavic has 8km range, whereas the Phantom’s range is 7km. So, it’s another point for the Mavic 2 Pro.

Parker gives a slight advantage to the Mavic 2 Pro here, even though both drones do a great job. He couldn’t catch the Mavic with his hand because the drone was sensing it as an obstacle.

Both drones can stand the wind up to 23mph. However, Mavic is a little lighter so it gets thrown around a little more in the wind.  Therefore, the Phantom gets a point in this regard.

Mavic 2 Pro has Active Track 2.0, and the Phantom has version 1. According to Parker, you can feel the difference. The Mavic has improved tracking abilities, plus it also has three different modes: Trace, Profile and Spotlight. The Spotlight tracking mode is Parker’s favorite because it lets you keep the subject in the center of the frame while moving the drone around it. So, Mavic wins here over the Phantom.

Since both drones shoot 120fps in HD, Parker tested it out. And is it usable? Well, it doesn’t look too good. Parker suggests sticking to the 4K unless you really need that 120fps footage. Although, the Phantom makes slightly sharper and clearer videos than the Mavic.

Ease of use and learning curve

While both drones will take some time to learn how to fly them and get smooth shots, they are both very beginner-friendly. Parker gives a slight advantage to the Mavic because of the new tracking features, since they’re great for beginners.

According to Parker, Phantom wins when it comes to the controller functionality. He prefers the built-in screen better than having to use a phone because it saves you a hassle and saves your phone battery.

The Phantom feels stronger and less like a toy than the Mavic. Parker crashed it a few times and it’s still going strong. He still hasn’t crashed the Mavic, though, but the Phantom 4 Pro does seem more durable.

Parker tested the decibel levels of both drones standing just a few feet away. The Mavic clocked in around 70db and the Phantom about 80db. So, there’s a slight advantage to the Mavic here, but keep in mind that it’s still not super-quiet.

The hyperlapse feature is new to the Mavic 2 Pro, and Phantom doesn’t have it at all. Parker likes it and uses it, but it is a bit shaky in the wind. So, it’s best to use it only if you fly in favorable weather conditions.

Both drones shoot in 4K, but the Mavic only does it up to 30fps, whereas the Phantom goes up to 60fps. So, Phantom is a winner here, especially if you shoot a lot of slow-motion footage.

Mavic sports 10-bit color vs. 8-bit color on the Phantom. So, Mavic gives you more color information to work with, meaning that it wins again. This especially makes a difference when shooting in D-Log and color grading the footage. Plus, The Mavic 2 Pro has a new HDR profile that the Phantom doesn’t have.

If you don’t want to spend too much time color grading the footage, when you shoot in normal color mode on each, Phantom colors seem a little bit richer overall. The Mavic has a bit warmer colors, while the Phantom seems more accurate. But, that’s a personal preference and the difference is, frankly, rather small.

Parker pushed both drones to ISO 1600 and the Phantom shows slightly less noise than the Mavic. The Phantom can go up to ISO 6400 and the Mavic maxes out at ISO 1600. However, when the Phantom is at 6400, the image isn’t usable so Parker doesn’t recommend going over ISO 1600.

In conclusion, when it comes to the overall image quality, both drones do a good job. As Parker puts it, they’re just different. Each has advantages over the other, but it depends which features are more important to you.

And the winner is…

According to the scoreboard, the Mavic 2 Pro wins with 10 points over Phantom 4 Pro that has 7 points. However, most of the times the differences were subtle, and the Mavic only had a slight advantage over the Phantom. Still, Parker says he would opt for the Mavic 2 Pro because it’s slightly cheaper, smaller, and quieter. Also, it has the 10-bit color for better gradeabilty and it has newer tech so it has got some great new features.

What if you already own a Mavic or a Phantom drone?

If you already own a Mavic drone, is the Mavic 2 Pro worth the upgrade? Parker would say yes. The larger sensor and the 10-bit color are enough on their own to upgrade your gear. But if you already own a Phantom 4 Pro, should you “sidegrade” to the Mavic 2 Pro? Well, unless you absolutely need the 10-bit color or better portability, Parker believes it’s not worth buying a whole new drone. The Phantom 4 Pro will do a great job. But when the Phantom 5 is out… Then we’ll see if it’s worth the upgrade.