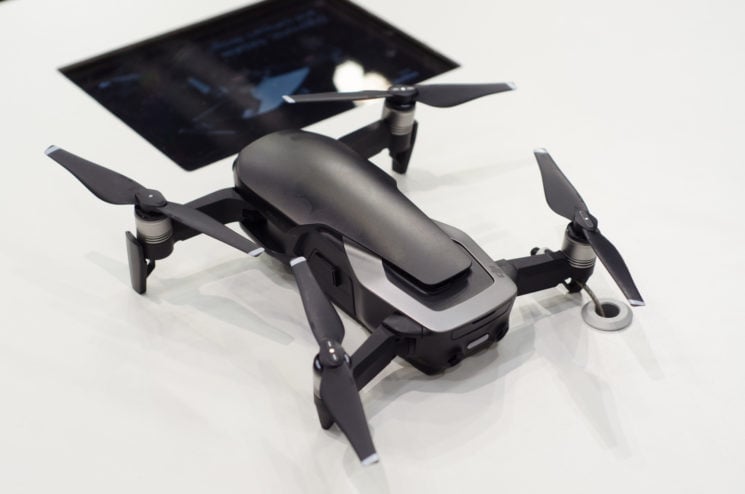 Announced last month, the Mavic Air is the newest drone from DJI. It fits in between the Spark and the Mavic Pro in DJI’s lineup, but what are its key selling points? We had the chance to speak with DJI about the new drone this week at The Photography Show. We chat about its key features, saw how it performs first hand, and there might be a hint as to what may be coming in the future.

This is a very tiny drone. Even if you’ve seen the Spark, you just don’t realise how small this is until you’ve seen it in person. It folds away to easily fit in almost any pocket. The controller, too, has been redesigned to be slightly smaller than that of the Mavic Pro to make it more easily fit in a pocket. And you don’t have to use the controller with the spark, either, you can just use your phone if you want to pack super light. When using the controller, though, the Mavic Air has a range of 4km.

Two new automated flight modes for selfie shooters; Asteroid and Boomerang. There’s also an increased range on the gesture control of 5 metres. That’s up from 2 metres on the Spark. It’s also a lot more reliable than it is on the Spark as a result of that extra distance.

The Mavic Air features a 1/2.3″ sensor with a 24mm full frame equivalent field of view. It shoots 12MP stills, with 32MP stitched images (25 stills combined) with the Asteroid flight mode. It also records 4K video at up to 30 frames per second, and 1080p up to 120 frames per second at 100mbit/sec bitrates.

Overall, it’s an impressive and responsive little drone with some great features.

As to whether or not there were new drones coming out to replace the Mavic Pro and Phantom 4, all DJI would offer is “Watch this space”.

It would be nice to see some of the features in the Mavic Air, particularly the two extra flight modes, come to the higher drones in DJI’s line up. Especially as comparisons show them being quite close in quality for some users. If the rumours are true, we’ll hopefully hear something soon.

But I suppose we’ll just have to wait and see.