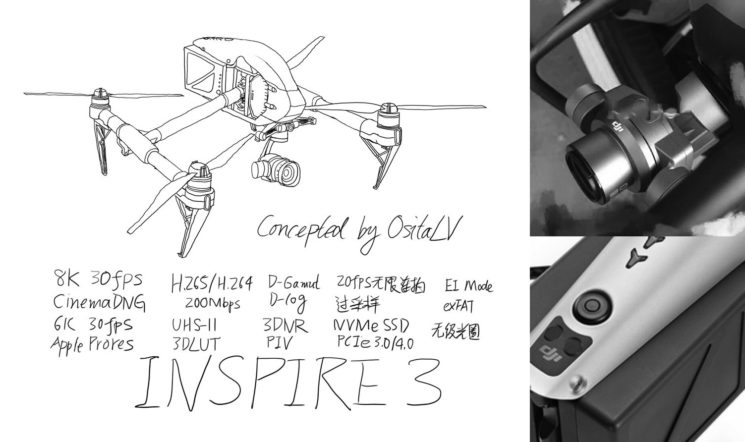 Demands on technology companies these days are pretty intense. It used to be that a company released a product, customers either loved it or hated it, and then a new model came out in 5 or so years to replace it. Today, it’s very different. No sooner had the Sony A7III been announced, for example, than wishlists appeared for a theoretical Sony A7IV. People want to see new camera kit far more often than they used to.

When it comes to drones, the “upgrade cycle” is even shorter, with people expecting new and upgraded models on an annual basis. Lately, there’ve been a number of rumours surrounding several new possible models from drone leaders DJI. The Mavic Pro 2, the Phantom 5, the Inspire 3 and a new fixed-wing drone, the DJI VTOL (Vertical Take-Off and Landing). The “leaks” on specs so far look quite exciting, but can they really be believed?

Twitter user OsitaLV has been pumping out DJI rumours for a while. But he’s been known to be wrong before, and several people have now called him out as a complete hoax. Essentially they say he’s working on the principle that if you post enough stuff, some of it’s bound to be proven right. And they say that these lucky guesses are what he focuses on to back up his credibility. I’ll let you make your own decisions, but if true, the current rumours on the new round of DJI products are very interesting.

This is the one that many have been waiting to hear about, especially after January’s announcement of the new Mavic Air. The Mavic Air is a very advanced drone for its size and cost, and quite a few who had considering going the Mavic Pro route have now gone with the Mavic Air instead. So, if it’s eating into Mavic Pro sales, the Mavic Pro 2 would have to be something very special to command the extra cost.

Dronedj reports that Mavic Pro 2 production has already begun and was due for announcement at some point this month. Some have speculated March 22nd, which is two days after the The Photography Show ends, so the timing would be a little odd. To announce a new drone at the end of the UK’s largest photography show rather doesn’t make sense. Unless they’re waiting for everybody else’s announcements to come out and then steal their thunder with a big global event.

But what can we potentially expect from a new Mavic Pro 2? Well, OsitaLV’s been posting about it since the beginning of February, with little bits here and there.

It seems a lot like a P4Pro inside a Mavic body (or perhaps slightly larger). A bit like putting an iPhone 6S into a 5S body and calling it the iPhone SE. But it’s nice to see that kind of power scale down into the smaller, more portable unit. As I said, a Mavic Pro 2 would have to be something special to beat out the Mavic Air, and P4Pro like capabilities and performance would definitely be something special.

This is another one that people have been waiting for. The Phantom 4 Pro outperforms the Mavic Pro in almost every way, although the convenience of the Mavic Pro has won out for many users. Still, the Phantom series is very popular amongst more serious drone filmmakers who aren’t quite ready to step up to something like the Inspire 2.

Beyond that, there’s not much out there. There has been some mention of a “Phantom 4 Pro V2.0”, but it’s possible that this could become the Phantom 5. OsitaLV did post a couple of photos showing what he claims is the new Phantom 5 interchangeable lens camera, though.

This one is going to appeal to fewer people than the above two drones. You don’t get into the inspire series unless you’re serious about your drone footage. This one is still very much rumour and speculation. Which will pan out is anybody’s guess. But 8K RAW footage seems to be a common theme.

They can do if they want. pic.twitter.com/Brl91PXWkd

Something really big is coming in the end of this year, I guess. pic.twitter.com/7Dc0PH6ddO

The Inspire 1 and the Inspire 2 that followed both have a great reputation amongst aerial filmmakers. So it will be interesting to see exactly how the Inspire 3 wins out once an announcement becomes official.

This is DJI’s rumoured fixed-wing aircraft. It sure isn’t going to be in the realm of most hobbyists, coming with an extimated $50,000+ price tag. But it sure looks impressive (and big!). The specs for this look very good, expecially the flight time.

Beyond that, very little is known, except that the 2nd generation of VTOL is already in the works. despite the first having not yet even been announced. Of course, there have been various DJI VTOL rumours out there which have also been disproven. So, which of these may be completely made up, and which are based on real information is impossible to tell.

Overall, though, if previous rumours are anything to go by, DJI’s product announcements often exceed the rumours that precede them. The specs for all of the units mentioned above already look quite impressive, so if things are true to previous form, they’ll be even more so once the official annoucnements start to come.

That being said, I’d still take these with a pinch of salt. DJI have confirmed nothing, and with the VTOL rumours disproven and OsitaLV being called out for “leaks” that didn’t become reality, it could all be complete nonsense.

What specs or features would you like to see in a DJI drone refresh?