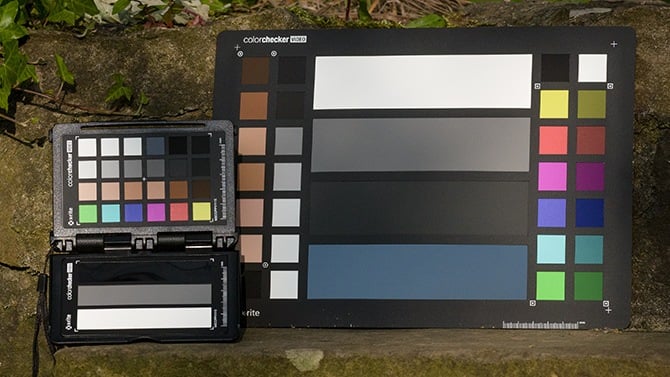 When it comes to getting consistent colour with your stills photography, regardless of the lighting conditions, camera model, or even brand, I can’t think of anything I’d rather have with me than the X-Rite ColorChecker Passport (CCP). It just works, pretty much flawlessly.

For video, though, it’s not quite as useful. So, when X-Rite announced that they had released two new products aimed specifically at video shooters, the ColorChecker Video and the ColorChecker Passport Video (CCPV), I had to check them out and see for myself.

The ColorChecker comes in two sizes. The larger ColorChecker Classic is primarily geared towards studio shooters, where it has a consistent place to live in a moderately clean environment. The ColorChecker Passport is a pocket sized version that’s more useful for location shooters who want the accuracy and consistency it provides when out on location. 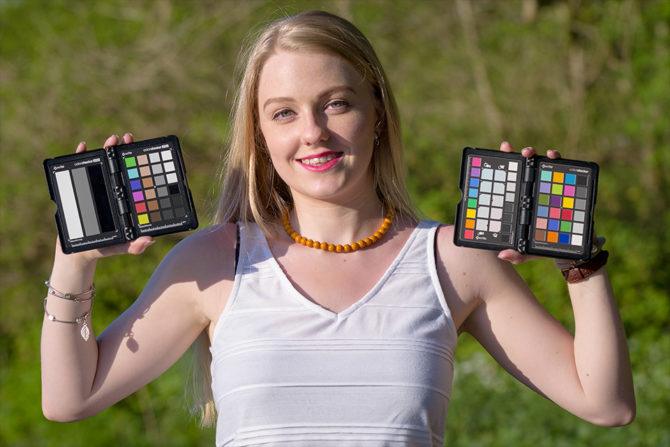 The problem with the CCP for Video

After I first got hold of a ColorChecker Passport a few years ago, I instantly became a fan. Whenever I head out the door with a camera, there’s one in packed into a bag, so that no matter which camera I’m shooting with, I can get perfect and consistent colours every time, as long as I’m shooting stills.

But the CCP has a big problem when it comes to video. It lacks the standard chromatic colours used with the vectorscope in software such as Premiere Pro and DaVinci Resolve. 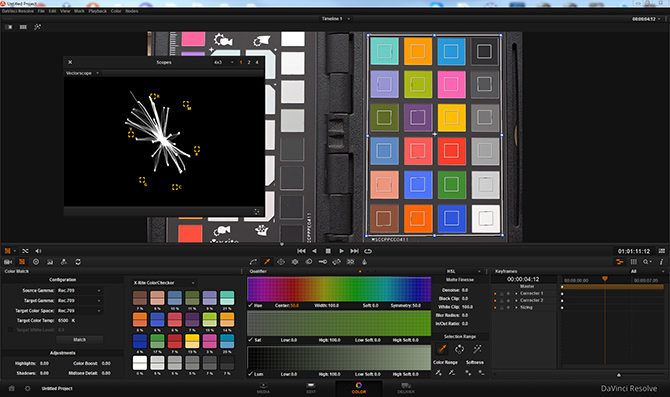 You’ve really no idea where any of the colours are actually supposed to sit on the vectorscope which means that beyond basic white balancing, there isn’t much you can do with it.

Fortunately, DaVinci Resolve added support for the ColorChecker Passport in Version 11. Unfortunately, it was very inconsistent in its results, and trying to match footage from different cameras was often still a bit of a nightmare.

ColorChecker Passport Video to the rescue!

Externally, the CCP and CCPV appear identical and they share the same white balancing target, but that is pretty much where the similarities end. The familiar 24 colour swatch panel of the CCP has been replaced in the CCPV by four sets of six swatches.

First, six chromatic colours (red, magenta, blue, cyan, green and yellow) and then six skin tones ranging from light to dark with different undertones show us exactly where our colours lie on the vectorscope. 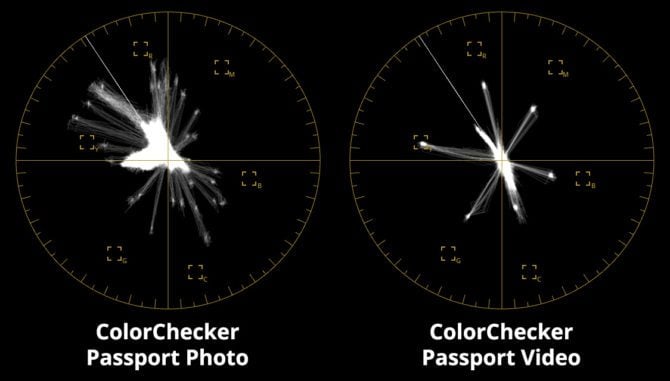 The CCP vs CCPV in the DaVinci Resolve vectorscope

Six linear greyscale chips provide for an even balance throughout the exposure, with six extreme highlight & shadow chips, including a high gloss black let us get consistent contrast from shot to shot.

The white balance swatches and range of rainbow colours of the CCP have also been replaced. This time by white, 40 IRE grey (the video version of 18% grey), and high gloss black exposure targets. These ensure consistent exposure and contrast between clips. The full size ColorChecker Video also has a fourth “Deep Grey” swatch to help balancing the shadows. 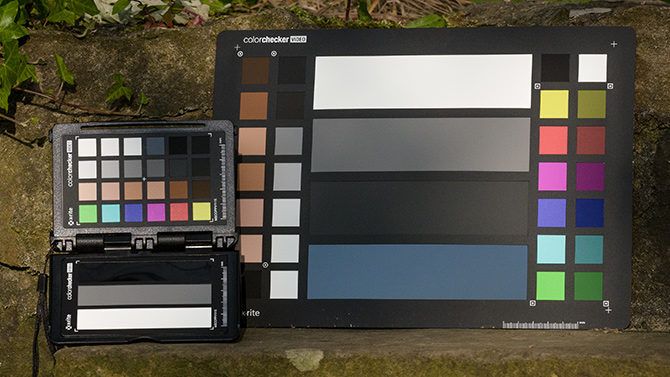 On the other side, along with the white balance target, the CCPV also offers a black & white focus target, which can be handy if you’re having to deal with low contrast subjects, or shooting a very flat colour profile that makes it difficult to focus.

The larger ColorChecker Video does not contain the focus target, instead it simply provides a bigger white balance target.

So how does it work?

Unlike the CCP, there’s no real camera profiling here. It simply acts as a reference to adjust your footage once you get it into the computer and load it into your editing software, but the CCPV’s job starts before we’ve even begun recording.

The first task is setting the white balance. With a DSLR, shooting video is a lot like shooting JPG, meaning that we have very little latitude in post to make big correction adjustments. So unless you’re using a camera capable of shooting raw video, you’re going to want to get this right.

While the process will vary slightly from camera to camera and between brands, it’s usually pretty straight forward.

If you don’t know how to do this, check your camera’s manual. In essence, you want to tell your camera that you want to set a custom white balance, fill your frame with the WB target, and then take the shot. 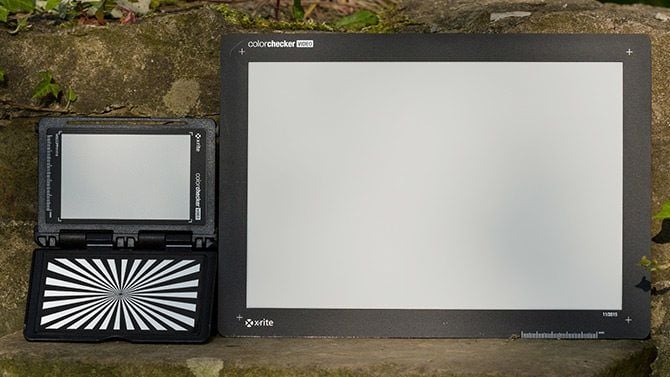 After white balancing your camera, the black, white and 40 IRE grey swatches on the CCPV help us get a good exposure.

This is one of those times when spot metering comes in extremely useful. I simply place my AF point over the 40 IRE grey panel, and flick my dials around or add NDs to give me a good exposure. 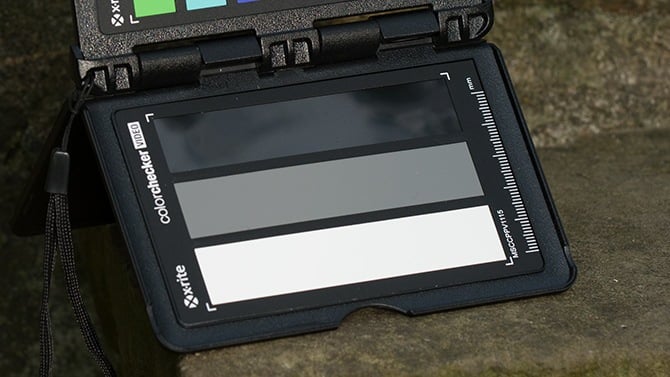 You’ll notice in the shot above that black isn’t really showing as a single solid shade of black. This is because the black swatch is a glossy black, in an attempt to eliminate as much contamination from the material surface of the swatch itself from throwing your results.

This, obviously, means that it will reflect at least some light sources. It’s not a big issue, just something to be aware of, and in general use when you have a subject holding it, you usually won’t even notice. If you do, you can just have your subject hold it at a slightly different angle. 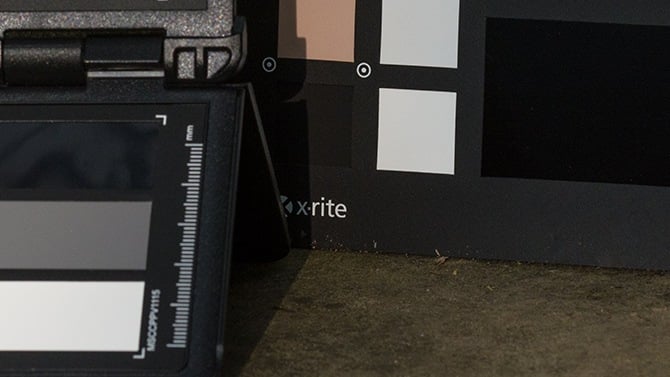 Occasionally you may need to add ND to get a good exposure with your shutter speed & aperture locked and your ISO as low as it will go. In such instances, I’ll white balance again just to help counter any colour cast that the NDs might have introduced (which it often does, even with expensive NDs – I use Schneider 4×5.65″ ND filters).

With your subject in the frame, simply have them hold up the ColorChecker Passport Video. Close in on it, if possible, and capture a few seconds under the same light in which you’ll be shooting your footage, and you have your reference footage. 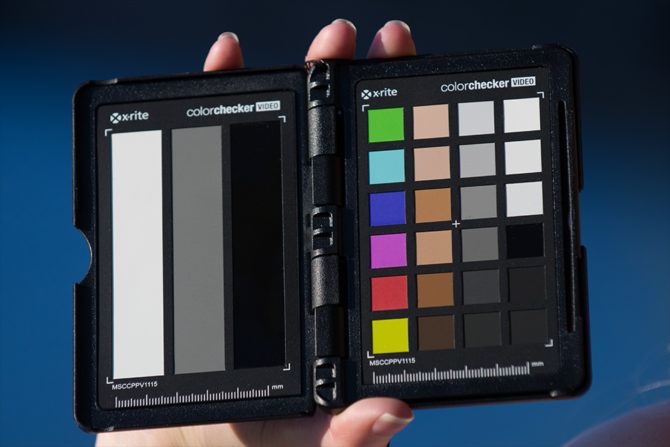 As long as the light doesn’t change, your settings don’t change, and you don’t need to add or remove ND, you’re good to go, only needing to capture the CCPV at the beginning of your filming.

If you’re moving around a lot, or the light’s rapidly changing, you need to constantly add more or take away some ND, or you’re going between indoor and outdoor, then you’ll want to white balance your camera again and capture a new short sequence of the CCPV each time something changes.

It sounds like a lot of extra work, and while it definitely takes some getting used to, it’s really not. The little extra time it takes to do this on set saves a lot more time in post and takes out 99% of the guesswork.

For the first few days playing around with the CCPV, I would get lazy and forget to re-white balance between different lighting conditions. I’d also forget to reshoot the colour swatches, and when it came time to edit, several clips would be out from the rest; Not by a massive margin, but enough that it was noticeable.

There’s no software supplied with the ColorChecker Passport Video, which makes sense, because there isn’t really a “standard” video editing system, and workflows are even more varied.

If you want some more workflow information, X-Rite have a free webinar coming up on June 20th, explaining how to use the ColorChecker Video products in your workflow.

In the interests of completeness

We did have one slight issue with the ColorChecker Passport Video, which required sending it back to X-Rite and getting a replacement. Somehow, the ink from the focus target had managed to transfer itself over to the white balance target.

Exactly how this happened is unclear and after chatting with X-Rite, we were confident that this was an isolated incident. They say they’ve received no other reports of this happening, and we’ve had no problems at all with the replacement unit. I certainly wouldn’t let it put you off.

In the studio, under consistent lighting and exposure, you only need to use it at the beginning of your shoot, and you’re good for every take until something changes.

On location, where lighting conditions can often change quite rapidly, you may have to use it for almost every single take, especially if you’re getting slight colour casts from light reflecting off leaves in woodland, or blue sky reflecting off the surface of a river, for example.

In the studio, the full size ColorChecker Video is perfect, but it’s something to bear in mind when choosing which one to purchase and figuring out which best suits your needs.

When I purchased my original ColorChecker Passport, it came with a lanyard that attached to the CCP letting me hang it off a light stand or tripod. It ended up staying in the box unused because you actually need to reprofile your camera very little. If you’re shooting at the same locations regularly, or under the same lights all the time, once you’ve created a handful of profiles, you’re pretty much covered for most situations you’re shooting in.

After attaching a wriststrap lanyard to the CCPV and hanging it from a tripod between takes, I started to remember to use it much more, because it was always there in view. Leaving it behind at the location or losing it also became a non-issue, because I’d notice it as soon as I went to pack my tripod away.

Hopefully, X-Rite will revisit this decision at some point and start to include one again, at least with the ColorChecker Passport Video. For now, there’s plenty of options over on Amazon, and I would definitely recommend picking one up, especially while you’re getting used to fitting the CCPV into your video workflow.

My recommendation is simple. If you shoot video regularly, then buy it. Well, buy one of them, either the ColorChecker Passport Video, or the larger ColorChecker Video. Which one will depend entirely on your needs and circumstances, but definitely get one of them.

The shooting workflow does take some getting used to, but it’s made my post workflow so much easier to deal with. It’s made things far more accurate and consistent than the guesswork that was previously involved when attempting to match different clips or shots from multiple cameras, while also letting me spend less time at the computer.

It’s found a permanent place in my bag next to its older CCP sibling.