Smart Objects are one of Photoshop’s most versatile features as far as I’m concerned. When I first discovered them in about Photoshop CS2 or 3, they completely changed my workflow. In this video, Unmesh Dinda of PiXimperfect offers up a huge complete guide showing what they’re for and how you can use them. 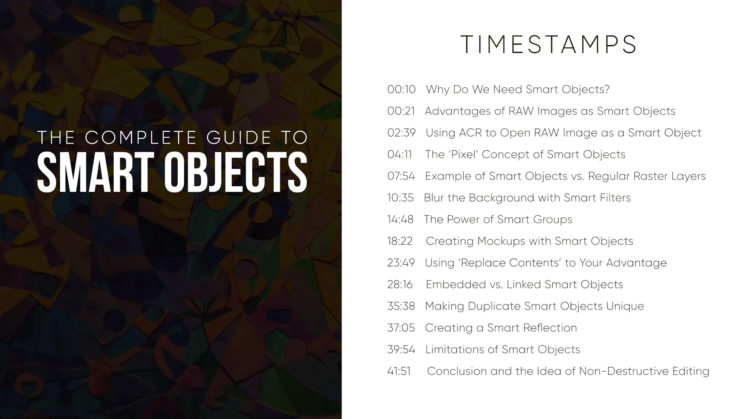 I first came across Smart Objects when I saw a video on YouTube by a photographer whose name escapes me. It was a “speedlapse” editing video. What caught my attention was that he was able to go back into Adobe Camera Raw after he’d brought the image into Photoshop. This was long before Camera Raw became a filter within Photoshop. There was no explanation in the video, but I just had to find out how he did it.

That’s when I discovered them and never looked back. They’re immensely powerful for a number of uses.

Typically, for me, that means bringing a raw file into Photoshop as a Smart Object, so that if I want to tweak them again after the fact, I can just double click on the layer and bring up ACR with the original image data – unlike running the Camera Raw filter which just uses the rasterised Photoshop layer contents. It also means that I can resize images and Smart Object layers without having to worry about losing detail. All of the original data is contained within.

But I also use them regularly for compositing product images here on DIYP, and I’ve spoken about using them for that purpose before here. They’re great for embedding things like Illustrator graphics into Photoshop documents, too, which I often do for things like logos so that I can easily scale them to any size.

Unmesh goes into great detail in this video, as one would expect for a video that’s a hair over 43 minutes long. If Smart Objects have confused you or you’ve never heard of them before, you’ll want to watch this. They really are a valuable and very powerful tool.

5 reasons to use Smart Objects in Photoshop