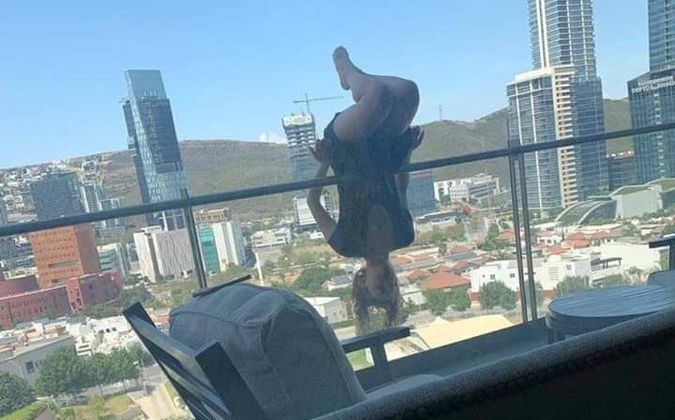 Even though several people have died after posing for photos on great heights, I guess some folks still think it’s cool to risk your life for a shot. A woman from Mexico recently fell from 80 feet (24.3 m) while practicing “extreme yoga” on the balcony rail. As you can guess, she was doing it for the sake of a photo. She reportedly survived the fall, but she was seriously injured.

Mexican newspaper El Universal identified the woman as 23-year-old Alexa Terrazas. In the photo, she is seen dangling upside down on the balcony rail. She isn’t using her hands, but apparently keeping the balance using the weight of her legs.

Unfortunately, Terrazas fell from the sixth-floor balcony after the photo was taken. El Universal writes that she broke 110 bones and won’t be able to walk for years. She broke both of her legs and suffered fractures to her arms, hips, and head. She reportedly underwent an 11-hour surgery and will stay sedated for two weeks.

According to El Imparcial, the rail didn’t have structural damages, so the fall wasn’t caused by them. It was, apparently, a stunt that went terribly wrong.

This whole thing reminded me of the model who dangled over a 1,000ft skyscraper without safety gear just so she can pose for Instagram. Unfortunately, Terrazas’ story didn’t end that well. Still, she is lucky that she has survived, and I sincerely hope that she will recover as fast as possible and that she’ll never risk her life this way again.

I think it’s not worth it putting your life to risk just for a flashy Instagram photo. And if you’re gonna dangle from great heights to shoot photos – at least do it right.