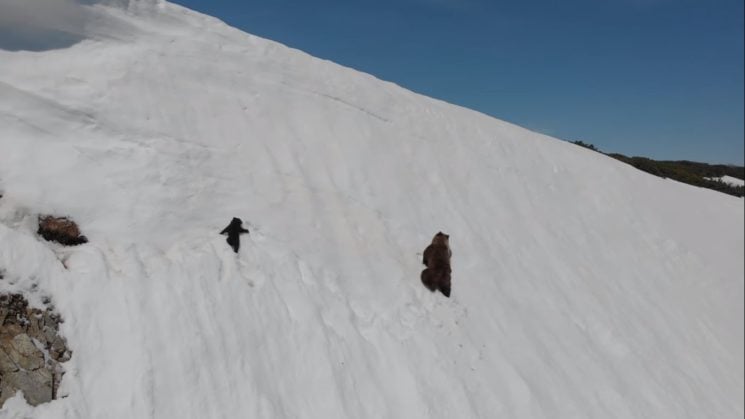 Have you seen the viral drone footage of mama bear and her cub trying to climb up a snow-covered mountain? The baby loses its footing several times and slides back down, but eventually manages to join his mom at the top.

Many people have interpreted this video as a metaphor for determination, but biologists who saw it have a different opinion. The determined baby bear inspired a lot of motivational posters and caused a lot of “awwws.” However, it was apparently the drone that made the animals run in panic in the first place.

The video first appeared on ViralHog, from where it was posted to Twitter, and the rest is history. It quickly went viral, and at the time of writing, it has over 20 million views. In the video, the mama bear and her cub are climbing the snow-covered mountain, and while the mom quickly reaches the top, the cub slides all the way back down. But it doesn’t give up and rushes towards its mom once again. After nearly reaching the top, the baby loses its footing and slides down again. This happens several times. On one occasion, the baby slides down because the mom inexplicably swipes at it with her paw. But eventually, the two reunite and walk away.

Apparently, many people have overlooked the moment when the mom swipes at the cub. Or the fact that the two bears look startled both during the climb and when they finally reunite. The video has quickly become a metaphor for persistence which has been retweeted almost 200,000 times (and counting).

We could all learn a lesson from this baby bear: Look up & don't give up. pic.twitter.com/nm0McSYeqY

The video was obviously captured by a drone, and many people have had a much different reaction to it. When you watch it more closely, you’ll see that it’s not cute at all, as the two bears are terrified and trying to escape. Clayton Lamb of the University of Alberta told The Atlantic that, judging from the bears’ behavior, the drone was flying too close.

First of all, the mom kept anxiously looking up at it, clearly bothered by its presence. Also, it’s unusual for a female bear to climb such a slippery slope with her young and vulnerable cub. However, it looks like she took this risk because she felt that the drone was a bigger danger. As for the mom swiping at the cub with her paw – this happened when the drone got closer to the animals. Lamb explains that the mom probably felt the approaching drone as a kind of attack, and she wanted to push her cub away. It’s possible that she thought of a drone to be a bird of prey.

After analyzing the bears’ behavior, many people reacted against the drone operator who, apparently, scared the bears into pursuing a dangerous path. It hasn’t been just biologists who have condemned the irresponsible drone flying; drone pilots have condemned it, too.

The video going around of a bear cub scrambling up a snowy cliff to get back to its distressed mother is being shared as a heartwarming metaphor for persistence. It’s not. It’s a dangerous stunt by an irresponsible drone operator who should know better.

As a drone pilot this footage makes me angry. Did you see the momma bear lash out as the cub was almost up at 1:19? Got to think the rapidly approaching aerial contraption wasn't helping.

Mom is *super* worried. The way she paces back and forth, looks around is very anxious. When she appears to push him down? She's pushing him away b/c she thinks the drone is about to *attack* him.

Stop sharing that video of the baby bear climbing back up the mountain. Does it show perserverence? Yes, but as a extremely loud drone harasses both mother and baby. It shows unethical filming and the drone operator should be charged.

Of course, drones have their purpose in wildlife exploration and filming wildlife documentaries. But those drones are used by professionals who make sure not to disturb animals. The Atlantic writes that there have been several studies that have assessed how animals react to drones. The reactions vary between species, but they also depend on factors such as the shape of the drone, its flight speed, how fast it approaches etc. And we’ve even seen antelopes and eagles knocking drones out of the sky.

When it comes to bears, a study has shown that they get distressed when in proximity to drones. This also confirms what the biologists have seen in the viral video above – the bears were terrified by the presence of the drone.

Many people have argued that the drone operator should be prosecuted due to irresponsible behavior. However, it’s not certain who filmed the video, or even which drone was used. The only information we have is that the video was captured on 19 June 2018 in the Magadan region of Russia.

In my opinion, you don’t even have to be a biologist or an animal behavior expert to see the fear in the bears’ behavior. Personally, I found this video difficult to watch. I saw no metaphor for persistence, only an attempt to escape and a struggle for life. Unfortunately, people often interfere with wildlife because they want to take a photo or video of a lifetime that will bring them 15 minutes of Insta-fame. And sadly, this sometimes ends tragically for either humans or animals.

How do you see this video? A metaphor for persistence, or animals struggling to escape the danger they see in the drone?