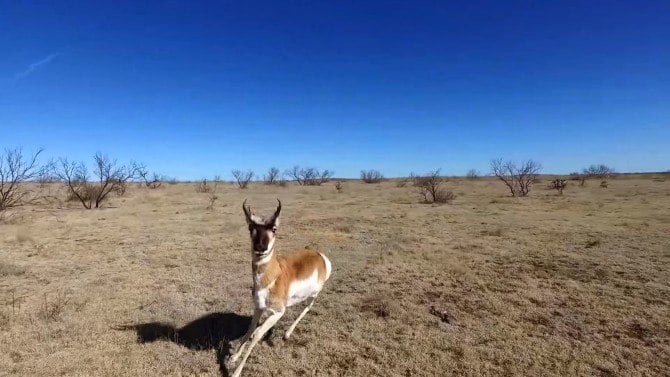 Done and nature don’t always play nice together. We’ve see drones being attacked by chimpanzees, eagles and lions, but this is the first time we are seeing a drone being knocked down by an antelope.

According to KGW photographer Travis Higgins was flying a drone in Clarendon, Texas when he spotted a Pronghorn Antelope resting and minding its own business.  Initially, the antelope was startled by the noise and the foreign flying object (I guess it can only think about it like we thing about UFOs) and started running away.

As the drone refused to forgo the chase, the antelope stopped running and started to be curious about it. At a certain point, the drone came too close and the antelope decided that it’s either too much of an annoyance or a genuine threat, and headed towards it. Increasing speed, the antelope rammed it and knocked the drone out of the sky.

Travis told News 8 the antelope ran away unharmed and the drone suffered a broken prop but has since been repaired.

According to outdoorhub, depending on the circumstances that led up to this situation, it could be construed as wildlife harassment.

We are not sure where exactly the video was taken, but more and more parks in the US are prohibiting unauthorized drone usage in their perimiter and this video perfectly explains why.

Deal alert: B&H is knocking $430 off the DJI Mavic Pro Fly More combo for today only

« DIY: How to make your own ‘Centriphone’ bullet-time rig
I’m Getting Rid of My Flash Gear and Here’s Why »