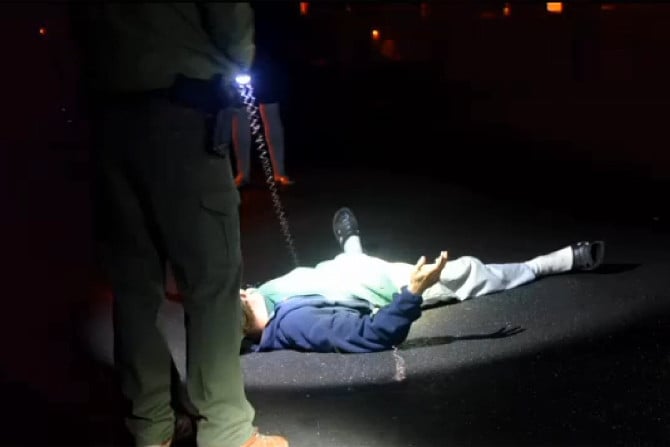 Travis Sanders visited the Hawai’i Volcanoes National Park on Saturday night with his wife and daughter in order to see the rising lava lake at Halema’uma’u Crater, but never imagined that he’d turn into the main attraction.

At some point Sanders decided to use a drone to capture the spectacle and the crowds, later claiming he was unaware his actions were against the law, but things turned ugly when a park ranger approached and demanded that he brings it down.

Accounts of what happened after the ranger asked to see Sanders’ ID greatly differ. The photographer stated he was simply trying to avoid a confrontational ranger, while park officials said the “very unruly” suspect fled the scene and was stopped in order to protect the hundreds of people at the scene and prevent him from falling down the edge of the 500-foot deep caldera.

Hundreds flocked to get a glimpse of the rising lava lake and several of the people who witnessed the confrontation contacted Hawai’i News Now. Most said the incident was excessive and unnecessary, but the park’s spokesperson, Jessica Ferracane, stated otherwise.

“The suspect refused to identify himself and fled — not far from the edge of the caldera, which is more than 500 feet”, she said, adding that “the ranger deployed his taser to stop the fleeing suspect and then arrested the suspect for failure to comply with a lawful order and interfering with agency functions”.

The drone model Sanders used to capture the video is unknown, but according to him it was a 3” micro quadcopter “toy”.

“My toy has some lights on it so I thought it would be fun to fly it up and down — no big deal, right? Well apparently they’re not allowed there I found out,” he said, before going on to share his side of the story:

“A guy approached me in the dark and said, ‘Bring it down!’ and he was very angry. I had no idea he was a ranger. He sounded very angry, confrontational — like he wanted to fight — and I didn’t really want to stick around for it so I just told him, ‘I don’t have ID and I’m leaving’.

My daughter was crying. She was screaming, ‘Leave him alone! I hate you!’ and she started going after the park ranger guy. There was a whole bunch of people going, ‘Don’t worry man, we got it on video. He’s not going to do anything else to you,’ but he kept threatening to tase me again as if I was moving or something and the only thing that was moving was my mouth I was saying, ‘Okay, okay. I’m not moving. I’m not getting up. I’m not resisting you”.

However, the spokesperson contradicted Sanders’ version and said that “apparently the suspect was very unpredictable and very unruly and the national park service ranger was really unclear what his next actions would be and needed to stop this individual”.

Ferracane also reminded national park visitors that they should leave their drones at home, as flying unmanned aircrafts is illegal in all 407 national parks across the US. “That national policy was enacted in August of last year and the reason is for visitor and resource protection and visitor enjoyment”, she explained.

There’s currently an ongoing investigation, but park officials say the ranger acted in the best interest of public safety. They added that while no one has been taken into custody in the past for flying a drone in the national park, a ranger using a taser in not unprecedented; stating there have been less than five incidents since law enforcement rangers received them seven years ago.

Is this another case of excessive use of force by law enforcement or an irresponsible drone operator? Perhaps a bit of both.

(Updated to replace the lead image)

« Adobe’s GPU Acceleration is Not That Great After All. Yet.
Project Tassel: Helping Out One Portrait At A Time »