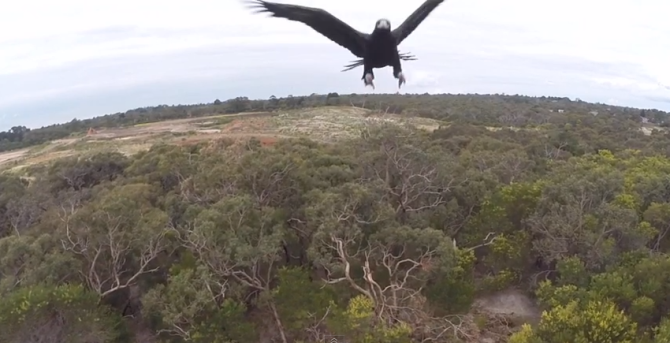 Drones seem to be regularly under attack, sometimes from lawmakers, and often from disgruntled neighbors.  But rarely do we see it under attack from the air.  Let’s change that, shall we?

Australian photographer Adam Lancaster was taking his DJI Phantom out for an aerial stroll through the bushes of Victoria when a winged guardian of the skies took exception to its presence.  In exciting footage of the encounter, a Wedge-Tailed Eagle flying nearby is seen attacking the drone midair, sending it plummeting to the ground.

Getting up close and personal with wildlife is a wonderful thing (did my good deed for the decade last night by rescuing a baby rabbit from one of our dogs and returning it to its nest), but it’s always preferable when your equipment goes undamaged.

As Lancaster says, “This is the last thing a small bird sees when a Wedge-Tailed Eagle decides that you are dinner.”  At least you’d make your departure from the land of the living in a rather dramatic fashion…

And, of course, everyone likes to see replays in slow-mo:

Lancaster cautions drone pilots against flying when birds of prey are out, not only because of the damage it can do your equipment but the harm it could cause to the bird.  According to Lancaster, the eagle was not harmed in the impromptu making of this video, but his drone did suffer some damage that needed repairing before taking to the skies yet again.  Fortunately for him, the damage was minimal and was easily fixed for the grand sum of $12.

Next time you’re out flying, maybe through a piece of steak on your whirlybird as a peace offering to the locals…

« Can You Tell How Many Photos Can Each of These Hold?
This Tripod Can Be Opened, Closed And Locked With A Single Hand »