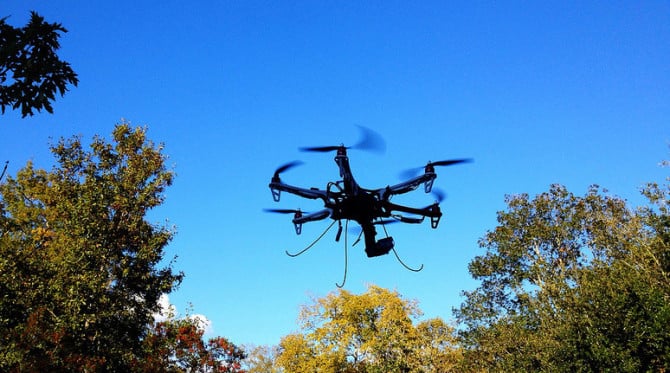 Drones are a common and controversial topic, and drones themselves sometimes make people angry.  Brett McBay, a California resident, is so passionate about drones that he instructed his son to shoot one down outside their Modesto, CA home with a shotgun.  McBay alleges that he originally thought the drone was a CIA spycopter.  However, it was a homemade hexacopter built by his neighbor’s son who was home visiting his parents.

Eric Joe was home visiting his parents over Thanksgiving last November when he decided to give wings to his creation.  After what we assume was a scene reminiscent of Frankenstein, his drone lifted off and spent three and a half minutes in the air according to Ars Technica.

Despite having his craft shot out of the sky, Joe maintained a pretty good attitude about it all.  Then again, as he said, “I didn’t want to get argumentative with a guy with a shotgun.”  Later that day, Joe sent a very courteous email toe McBay that included a list of the damaged components and their relative cost, asking that McBay pay for his son’s damage to the drone.

In their emails back and forth, McBay did offer to cover half the cost but refused to pay the full amount and ended the conversation with:

“Your facts are incorrect, I’m considering the matter now closed.”

But, this wasn’t the first time McBay had fired upon the Joe home.  As Eric detailed in one of his emails,

“Just as you asked me to give the courtesy of notifying you of my flying activities, I also ask you the courtesy of not shooting live ammunition in our direction. This is the third time discharge from your firearms has hit our house and property. The first incident left a bullet hole in the door by our garage. The second incident occurred last Thanksgiving when birdshot from your skeet shooting activities rained into our backyard. The third, of course, being what we’re currently discussing.”

After having his polite requests refused, Joe headed to small claims court where the judge awarded him an $850 judgement against McBay to cover repairs to the drone and associated court costs.

Even though Joe swears (and a judge believed him) that his drone was never actually over McBay’s property, what are people supposed to do when drones come invading?  Well, that’s probably one of the most heated points of the great drone controversy and is one that’s still being fleshed out in legislatures and governmental agencies.  In many circles, invasion of privacy and trespassing laws are trending towards defining the minimum elevation as being 500 feet about the ground.  At the same time, FAA regulations for drone and model aircraft require that they operate under a ceiling of 400 feet.  Combining the two statutes (where and when applicable) would basically eliminate all flight over private property without prior permission.

The Issue of trespassing by air is a separate issue from invasion of privacy which can be perpetrated from the land, sea, and air.  While Joe’s drone did not have a camera attached, the issue of who actually owns the airspace above any given property is one that will ultimately impact drone photographers/videographers once the law-making dust settles.

To be on the safe side, follow this simple rule:  If you wouldn’t walk onto that person’s property, don’t fly over it, either.