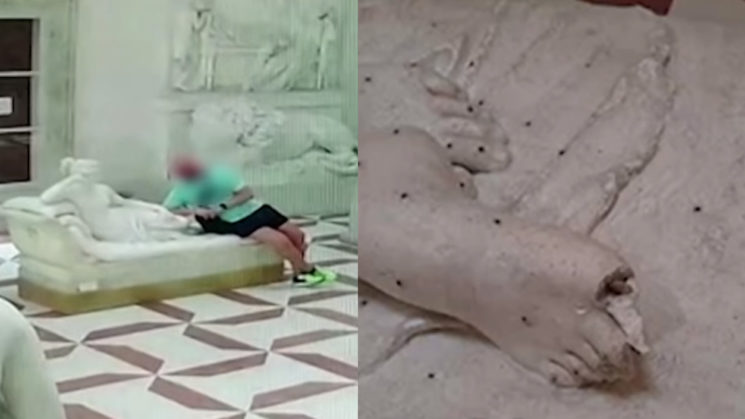 While visiting the Antonio Canova Museum in Possagno, Italy, a tourist managed to damage a 19th-century statue because – as you could probably guess – he posed for a photo. The man thought it would be awesome to lie next to the statue and have his photo taken. And when he did so, he broke off three of the statue’s toes.

The incident took place earlier this month when a group of tourists from Austria visited the Antonio Canova Museum. A surveillance camera caught the 50-year-old man when he lied next to the statue and posed for a photo. In the video above, you can see him checking what happened when he stood up. He even discretely tried putting the statues’ toes back in place.

Shortly after the incident, the museum published on its Facebook page that the man was identified. He even wrote a letter to Vittorio Sgarbi, the President of Canova Foundation, and the museum cited a part of it:

“I’d like to report myself, after today I read about the incident in Austrian newspapers and it was immediately clear to me that I had to get in touch.

I remain at complete disposal, it was irresponsible behavior on my part, the consequences were unknown to me, so I normally continued the visit to the museum and the entire stay in Italy (I didn’t escape). During the visit, I sat on the statue, without realizing the damage I evidently caused. I ask you for information on the steps that are necessary on my part in this situation for me very unpleasant and for which, in the first place, I apologize in all ways.”

Sgarbi reportedly commented that he “appreciates the civic sense of this man and takes note of his words of embarrassment for what happened.” According to Barnebys, the man even offered to pay the costs of restoring the statue. The same source notes that the provincial court in Treviso hasn’t decided yet whether or not to take legal action against the man.

The neoclassical statue was made in 1804 by Antonio Canova, showing a portrait of Napoleon Bonaparte’s sister, Pauline Bonaparte. It’s a part of a collection of plaster casts which is kept in the Antonio Canova Museum. The final marble statue that was made from it is kept in Rome. And as far as I know, so far it hasn’t been damaged by tourists who wanted a perfect Instagram snap.

A man smashes high-priced sculpture because of a selfie