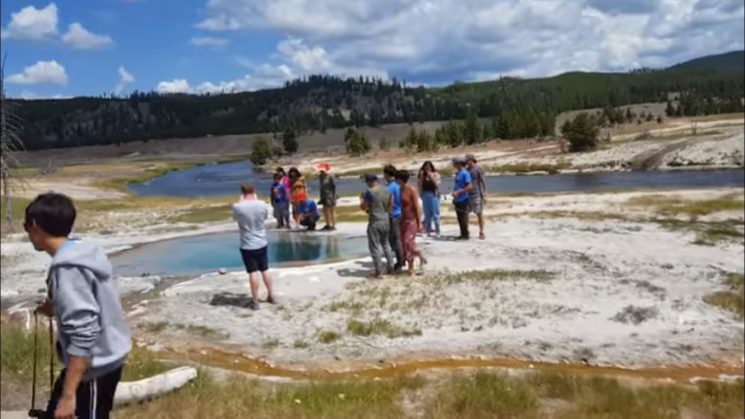 Taking photos and videos on vacation is what we all do, and it’s totally okay. But when you start ignoring signs and destroy the nature just to get more likes on Instagram, it becomes unacceptable. Recently, a group of tourists in Yellowstone National Park ignored all the warnings and gathered around a thermal feature to take photos.

Not only they walked all around the restricted area, but they even stuck their fingers i the water. All this doesn’t only damage the park, but it puts them in danger of hurting themselves, too. One of the visitors filmed them and warned them not to do it. While a part of them stepped away, some of them stayed persistent in sticking their fingers in the water and taking family snapshots.

YouTube user Jeffh34 took the video, and as he explains, when he finished recording, he realized there was no cell phone service in the area. He looked for a park ranger as his group continued the walk. Eventually, he found a park employee and showed him the video, and he then radioed the park police. While he was shooting, a part of the group stepped away, while the others just ignored him and kept on taking photos. One of them even got angry because he was being filmed, asking Jeffh34 to delete the video.

Some of the comments on the video suggest that maybe they didn’t understand what the sign reads. Still, it’s not an excuse, because there’s also a graphic “No Walking” sign everyone can understand regardless of the language. After all, this isn’t the first time people destroying national park property just to take photos or videos. They also often put themselves and the others in dangers (even their pets) just for the Instagram likes, or because they simply don’t give a damn. But these guys won the game – they disobeyed the rules, put themselves in danger and were destroying nature. Incredible.

Of course, this has nothing to do with the nationality of the tourists or anything like that. Reckless and disrespectful people exist everywhere. But as the creator of the video points out, he’s just glad no one got hurt, burned, or fell through. I can’t agree more, and I hope people will learn something from this, and become more careful and respectful to nature, no matter where they come from or where they travel to.

Update: the user removed the video after we published this article.