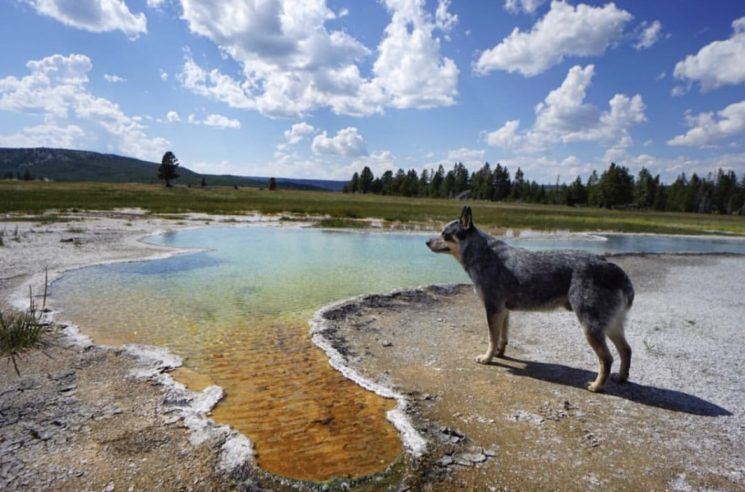 The stupidity of people who want to get attention on social media constantly evolves, and it has just reached a new level. One Instagram user made his dog stand on the edge of a boiling hot spring in Yellowstone National Park only to show off some photos and videos. He filmed himself and his dog with a drone, and the dog was running around off leash, dangerously near the hot thermal pools.

Not only did the guy break all the possible Yellowstone’s rules regarding pets, but he also got his dog in danger. The community reacted fiercely, and how can they not. One wrong step and the dog could have got plunged in boiling hot water. 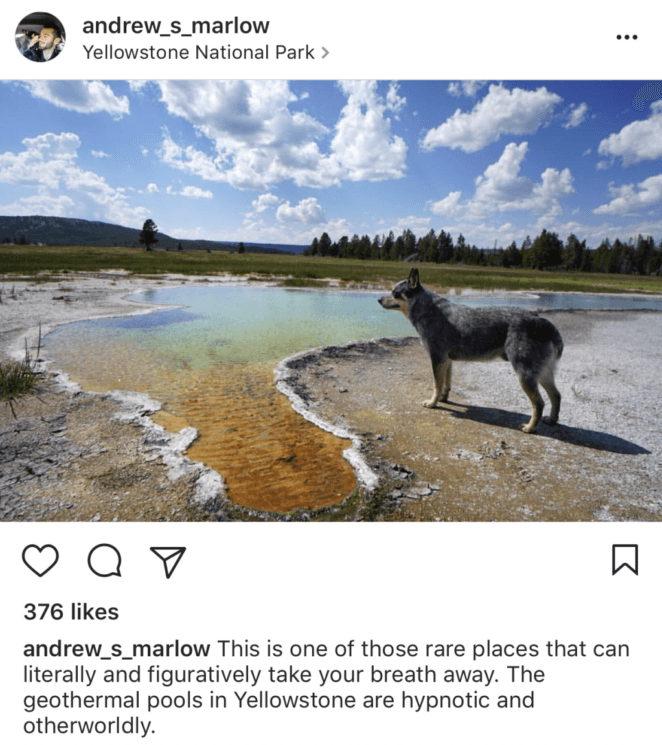 Andrew S. Marlow posted a photo of his dog standing on the very edge of a hot thermal pool in Yellowstone National Park. When one of the Instagram users expressed concern for the dog’s safety, Andrew replied that he trusts him because he listens very well to commands. I believe his dog is nice, well-behaved and trained, but still – this doesn’t lessen the danger. Walking off trail in hydrothermal areas can be very dangerous, and Yellowstone National Park’s Hiking page reminds us of it:

Stay on trails: taking shortcuts causes trail erosion and is dangerous. In hydrothermal areas, stepping on thin crust can plunge you into boiling water.

The page that contains regulations regarding pets clearly states the rules as well:

Pets may accompany you in developed areas of the park. This includes any areas within 100 feet (30.5 meters) of roads, parking areas, and campgrounds (excluding thermal areas). Pets must be kept under physical control at all times – caged, crated, or on a leash not to exceed six feet in length.[…]

According to this, Andrew broke a couple of rules when it comes to his pet. He kept it off the leash and he walked with it off the trail, dangerously near the geothermal pools. He also used a drone, which is another thing you shouldn’t do in a national park. And again, it’s clearly stated on Yellowstone’s website that it’s not allowed.

It didn’t take long for the community to bash Andrew for endangering his dog, and he eventually deleted his Instagram account. However, the page assholesoutside preserved and published the video Andrew took with a drone, which shows him and his dog walking and hanging out near the hot springs.

Personally, I wouldn’t know where to start commenting this man’s behavior and the ridiculous idea to take the dog off leash around the boiling hot springs. No matter how well-trained the dog is, try stopping it if it sees a bird or a squirrel it could chase. Even my blind, old and obedient poodle goes crazy when she hears a cat in the street. Also, I don’t think getting Instagram likes is worth hurting your dog, or even potentially hurting it. And last, but not least – he didn’t only act thoughtlessly to his dog, but also to the national park and its nature (which is, sadly, not so uncommon). So, I think this is wrong on many levels, and once again – I can’t believe what people would do for social media likes.