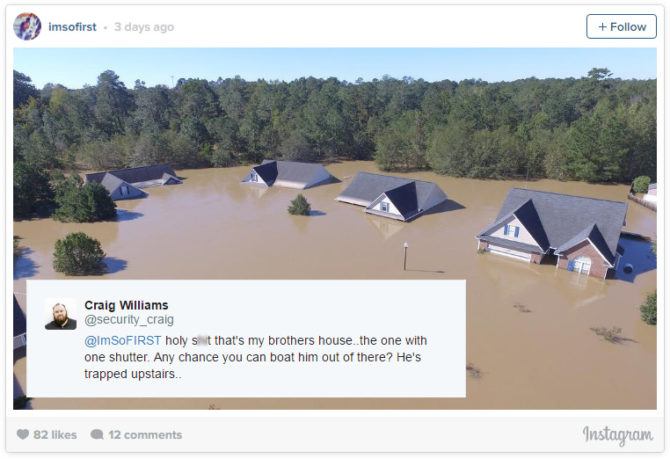 Hurricane Matthew was the deadliest hurricane in over a decade, killing at least 500 to possibly over a 1,000 people during its run. It also caused billions of dollars worth of damage to property. That devastation included Hope Mills, North Carolina which saw severe flooding. In the aftermath, filmmaker ImSoFIRST took out his drone to survey the area.

After getting back home, he posted a still frame to Instagram and Twitter. Purely by coincidence, the photo was spotted and recognised by Twitter user Craig Williams, who was shocked to recognise his brother’s house in the photo. It turned out, Craig’s brother was trapped inside the house, along with his dog who couldn’t swim. Unable to get the county to rescue his brother, Craig responded to ImSoFIRST to reach out for help. 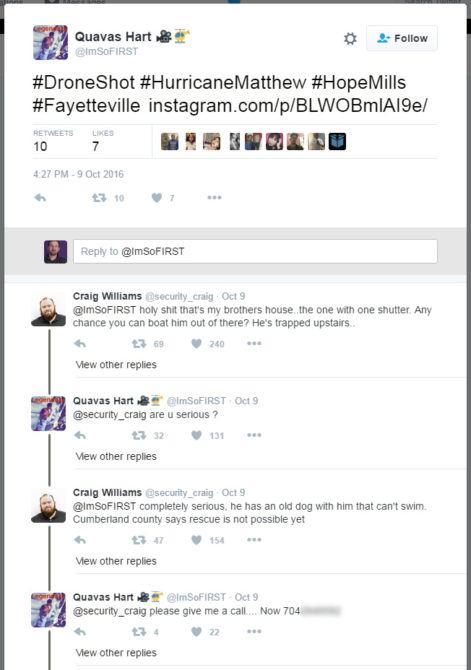 Craig has setup a GoFundMe page to help his brother recover from the floods, where he expands on what happened.

I called him to get help. He couldn’t believe there were still people in those houses since they were so far underwater. Apparently people had assumed they were already evacuated.

@ImSoFIRST immediately dropped everything and drove back to my brothers street – or at least as close as he could get. He didn’t have a boat – but he had seen boats. He knew he could get someone to help. Along the way he found a FEMA crew going door to door. He informed them there were still people trapped on Booker Place where nearly everything was under water. The rescuers descended upon Chris immediately. Finally he and Lana were safe.

ImSoFIRST also took his drone back out for the rescue to capture the moment as it happened.

It’s a crazy story with a great happy ending. You can read it all from Craig’s perspective on the GoFundMe page he setup for his brother. And here is the complete raw footage of ImSoFIRST’s initial flight over the area.

Aside from the obvious uniqueness of this particular flight, drones can be invaluable after such disasters. Whether flown commercially or privately, they help to keep a record of what happened. They can spot things we simply can’t from the ground, and they can reach areas long before humans are able to get there. And in at least one instance, they appear to have saved the life of a man and his dog.

Has this story changed your attitude towards drones and those who fly them? Are you starting to see the benefits where you might not have before? Or do you still think that all that drone owners do is cause trouble for other people? Let us know your thoughts in the comments.