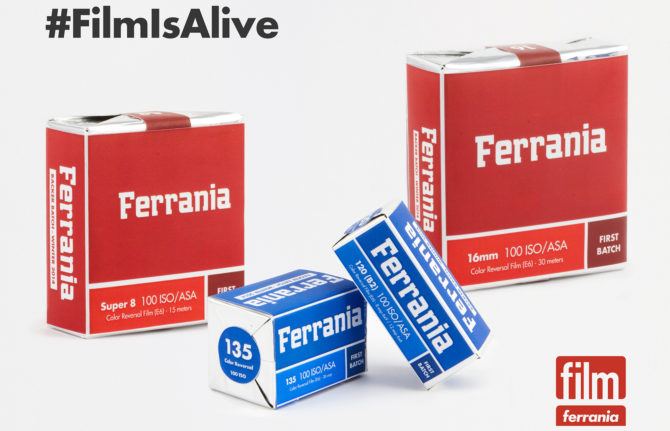 Ferrania was restarted as FILM Ferrania in 2012 by Nicola Baldini and Marco Pagni. The pair took to Kickstarter in September 2014 to seek funding to resurrect the recently closed Ferrania film factories after 3M’s departure. Their goal was simple. To keep producing the popular 35mm and 120 format films Ferrania was famous for.

But a number of factors caused some pretty big delays. Issues with suppliers, harsh weather, and the discovery of asbestos in one of the buildings to name a few. Now, though, FILM Ferrania are now back and say they are close to starting up with E6 slide film production once again. After a successful coating test, and the restoration of a film slitter, it seems they may not be too far away.

One of the problems setting them back has been preparing the jumbo rolls of triacetate base for the films.

While the company does have a much more modern slitter, the cost and effort of getting it online proved to be too great. Now, the company has been saved by an almost 100 year old antique slitter, which has been restored to its former glory.

With companies killing off film like there’s no tomorrow, I think it’s fantastic to see a company going head on into new product. It does seem an odd choice to be starting with a “reengineered” version of Scotch Chrome 100 slide film, though. By all accounts it wasn’t very good in comparison to some of their other films. But, time will tell. Perhaps the reengineering has helped to improve it somewhat.

It’s expected to be available in both 135 and 120 format rolls sometime in early 2017. You can read FILM Ferrania’s latest update in full here. Baldini said in a 2013 interview that they’re looking to bring back other “abandoned” formats like 126.

I for one am looking forward to seeing this film come to reality. Obviously I want to shoot both 35mm and 120 formats, but the idea of eventually seeing 126 is intriguing. It’ll be nice to go out and play with my mother’s old Kodak Instamatic 25 again. I haven’t used that since I was a kid.

What do you think? Are you one of the Kickstarter backers who’s been waiting for your FILM Ferrania delivery since 2014? Had you given up on ever seeing it actually happen? Are you excited at the possibility of new (old) films coming back to the market? Or are you happy to keep shooting your black & white films? Let us know in the comments.