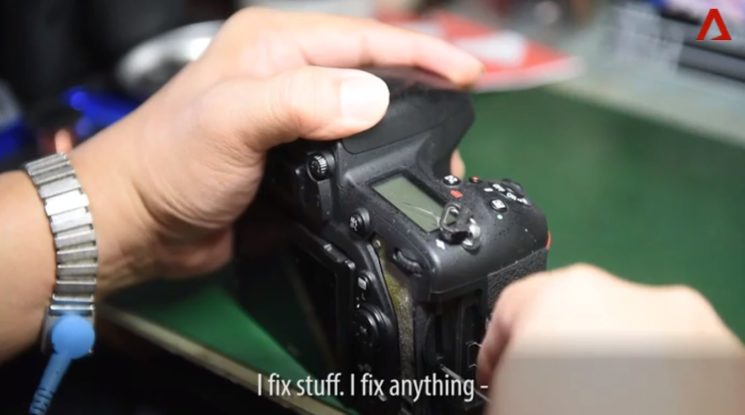 Even when all repair services discard your camera or lens as “irreparable,” there’s still a way to repair it. Mr. David Hilos can fix all the gear others can’t (or won’t). This 49-year-old Filipino based in Singapore is communications engineer, but he is also a hobbyist camera repairman who can save your gear no matter what happened to it.

Photographers know him as “camera whisperer” and he is a miracle worker when it comes to repairing photo gear. He converts digital cameras to black and white, “transplants” pieces of one camera to the other, and even brings drowned cameras back from the dead.

Mr. Hilos shares that he was one of those kids who tear their toys apart, and then slowly disassemble them again. So I guess his passion and talent comes from early childhood.

As a repairman, he uses the highest quality tools to dismantle the cameras and lenses. He uses screwdrivers that don’t leave marks on the camera’s screw-heads. But for some of the repairs, he also uses the common household items and the ultimate DIY approach. There are toothbrushes for cleaning and toothpicks for wedging the lens motor apart. In the video, you can see him repair a lens with broken AF motor using a paper towel dampened with lighter fluid and wrapped around a chopstick. It just needed a good clean to be as good as new. And it’s not about the gear, it’s about the photographer repairman.

Despite using the household items for some repairs, the “camera whisperer” is careful like a surgeon. He says that everything needs to be precise, and even the number of turns on the screws needs to be exactly the same.

Mr. Hilos’ says that the monetary reward isn’t the most important, but he simply enjoys what he’s doing. Even though we live in an age when it’s easier than ever to throw stuff away and get new ones, I really admire his skill. And I firmly believe we should fix stuff rather than throw them away immediately as they get broken. After all, it seems there’s a man who can fix our gear even if we think it’s broken beyond repair.

You can read the whole story about David Hilos on Channel News Asia. If you live in the same country as he does, I guess you’re saved in case your camera gets broken what seems to be beyond repair. And for those who live elsewhere, I hope there’s a “camera whisperer” like this in your country or state, too.