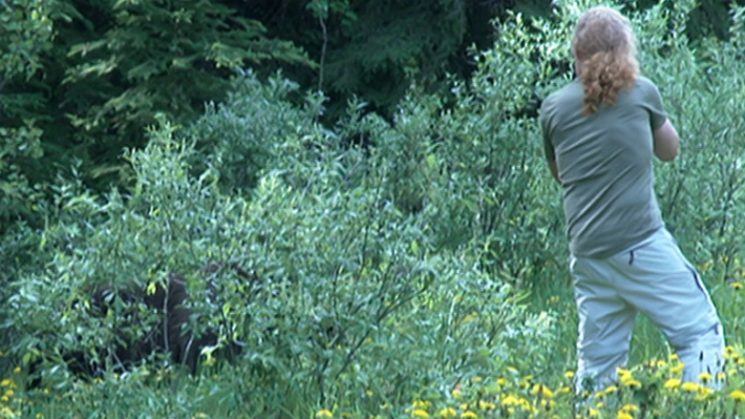 Some people would pretty stupid things to get a shot, and this guy is definitely one of the examples. The visitor of Banff National Park in Canada wanted to take a close-up photo of a grizzly bear, and he decided to “zoom with his feet.”

He approached the animal and took photos only from a few meters away. At a safe distance, photographer Ray Blanchard watched in disbelief and captured the reckless man through a telephoto lens.

The photographer tells CBC that he set up his camera on a tripod about 70 meters away from the bear. At the same time, there were twenty to thirty people gathered around the animal to watch it. A few of the observers were quite close to the bear while it was peacefully eating behind the bush. At some point, a man from the group got even closer, trying to take the close-up shot of the animal. He was standing only a couple of meters from the grizzly, snapping away with his phone.  Blanchard took the photos as well and documented this moment that, fortunately, ended up without injuries. CBC mentions capturing the moment on video, but unfortunately, I wasn’t able to find it anywhere so you can see the images on their website.

According to CBC, Parks Canada regularly advises the visitors to stay at a distance from wildlife. They are required to stay 30m/100ft from elk, deer, bighorn sheep and mountain goats. As for the more dangerous and unpredictable animals, like bears, wolves, and cougars, the advised distance is 100m/330ft. In this particular case, the park officials eventually warned people to clear the area. However, some of them just drove about a block away, and then walked back to take photos.

Although bears rarely attack out of pure aggression, there are situations when you could get hurt if you come too close. So, apparently, this guy and the rest of the visitors were lucky to remain a living proof of recklessness, stupidity, or not giving a damn – as you like it. But since the fine for disturbing the wildlife can go up to $25,000 in Canadian national parks, I hope people like this will suffer injuries on their wallets. This could teach them to stay away, respect the rules, and above all – respect the nature and wildlife.