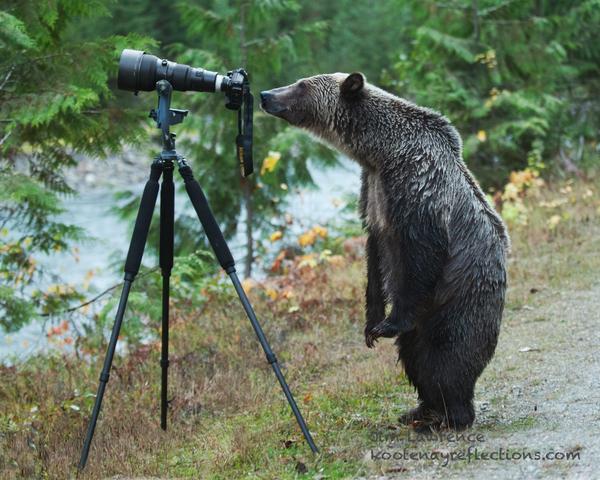 I’m still trying to decide if this would be a dream come true or a hair raising experience (or both?), but one thing is for certain it’s definitely a once in a lifetime moment. I caught up with Canadian based photographer Jim Lawrence, who was in the right place at the right time when this curious grizzly bear decided to have a closer look at the photographers Nikon D800.

Lawrence saw the grizzly gradually working it’s way up the river as it fished. The photographer set his camera up in an opening in the brush with hopes he’d be able to take a few photos of the grizzly. He explained that’s when things took an unexpected turn…

“I should know better than to guess what a bear is going to do. He crossed to my side and scrambled up the bank, at which point I dashed back to the truck for another camera.”

By the time he made it back to his truck, which was approximately 50 feet away, the grizzly had worked his way over to the D800 for an investigation. Lawrence stood back and watched the scene unfold. In an interview with CBC, he explained that the large species of bears are highly intelligent which often results in a curious personality.

“They say intelligent species are curious and the big bear was no exception. He approached the camera cautiously, sniffing deeply, then stood up for a closer inspection. For the longest time, he studied the screen and buttons then, with a huge long-nailed paw, gently tugged on the strap. The weight of the long lens caused the camera to pivot quickly upward, startling the big fellow at which point he kind of shrugged, and went back fishing.”

Fortunately, the intense moment ended on a rather anti-climatic note. A lot of this has to do with the calm approach Lawrence took to the situation. He told me in an email, “I must admit that after 55 years of shooting I’m more fascinated with the natural world then camera gear…” For Lawrence, his passion and drive comes from his subjects, which he tells us are vulnerable to extinction if measures are not soon taken to protect the bears. It’s a subject Lawrence takes seriously and rightly so. Over 300 grizzly bears are hunted in British Colombia every year during bi-annual trophy hunts, despite the animals already being named a threatened species in other Canadian provinces.

Lawrence says this is by far the most popular photo from his expansive portfolio and he’s perfectly okay with that. Hopefully, the photo and the story behind it will help bring awareness to the desperate situation the grizzlies have found themselves in, as well as encourage people to respect wildlife in general. Lawrence sees it as an “honor to be granted observation privileges over an animal’s life,” and that is something worth fighting for.

« The Westcott Eyelighter Will Give Wonderful Eyes. In Camera
Watch: A GoPro Gets SLo-Mo Scorched In Flames During A Failed Rocket Test »